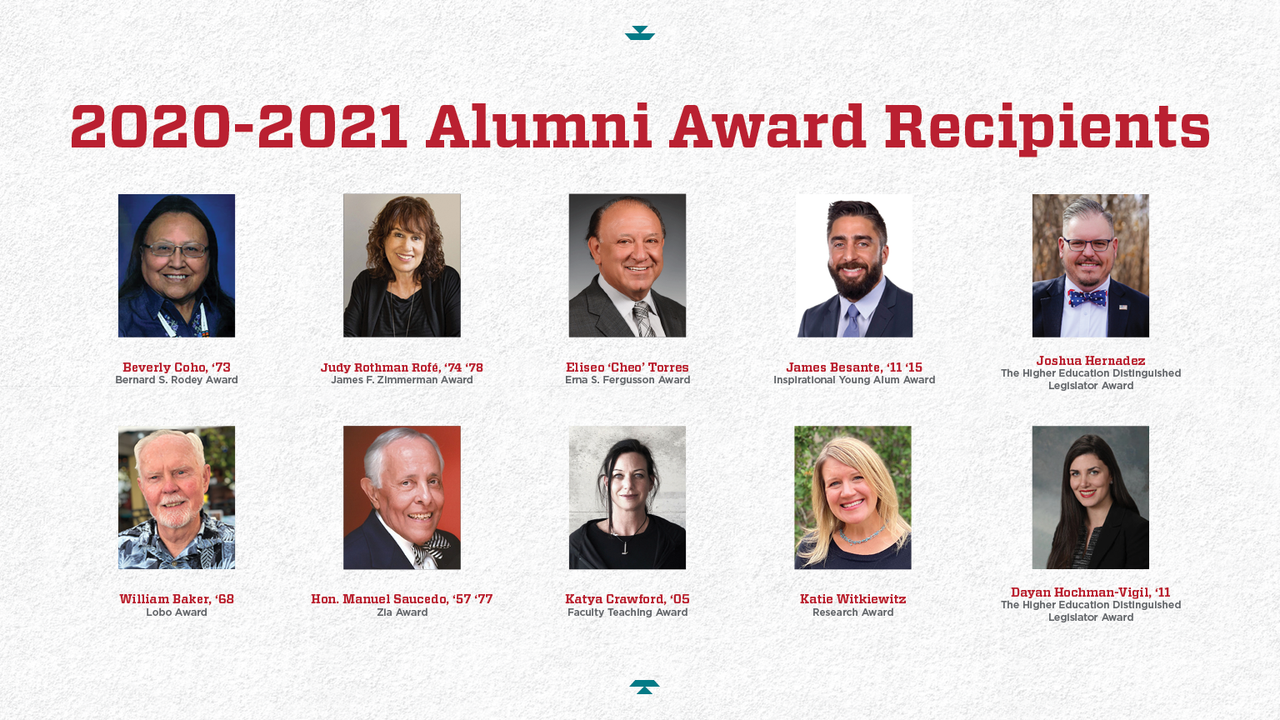 The University of New Mexico Alumni Asso­ci­a­tion has announced the award recipients of the 2020 – 2021 UNM Alumni Awards. These honorees are a culmination of two years in the waiting with seven of its pres­ti­gious annual awards and one inaugural award to be given this year – the Research Award.

Award recipients (alumni and longtime Lobos) have shown they are dedicated to community, service and innovation in their line of work. Their increasing impact can be seen not only at UNM but well beyond campus in communities across the world.

Beverly J. Coho has dedicated her life to leadership in education in many areas to improve the quality of life for all citizens. She graduated in 1973 with a Bachelor of University Studies degree and is a current MPA candidate at UNM.

Coho is a voter rights educator informing people to participate in democracy and make a difference for Cibola County, while semi-retired from more than 50 years of employment in various fields of disciplines, at levels of positions from support to executive leadership to elected/appointed official locally, regionally, nationally and internationally. With each position and each discipline, education is foremost in business development while alleviating poverty; in leading health advocacy while minimizing health disparity; in advocating student learning while eliminating illiteracy; in promoting public safety while decimating criminal activities; preparing/training human resources while decreasing unemployment; fighting elements of family dysfunctions while redirecting families toward qualities of life and more.

Coho was inducted into the New Mexico Women’s Hall of Fame in 1991.

Judy Rothman Rofé is a screenwriter, producer and lyricist specializing in comedy, multicultural content and literary adaptations for children. She won a 2002 Emmy for Outstanding Children’s Animated Program for Madeline (based on Ludwig Belmelmans’ books), and received seven additional Emmy nominations, including for "Julie’s Greenroom," a Netflix series which she co-created with Julie Andrews, and "Norman Picklestripes," a new Universal Kids stop motion series. Her other writing and producing credits include "Angelina Ballerina" for PBS; "Ni Hao Kailan" for Nick Jr; "Bill & Ted’s Excellent Animated Adventures" for Fox; "Arthur" for PBS, and the animated feature film "Trumpet of the Swan", based on the book by E.B. White She has written lyrics for over 200 televised songs for children and is currently developing projects for Apple TV+, Peacock (NBC) and Hello Sunshine.

Rothman has also gained fame as an author of satire for adults. Her LATimes bestselling book, "The Neurotic Parent’s Guide to College Admissions" was an offshoot of her viral blog.

Prior to her writing career, Rothman was an executive on the team that launched the Disney Channel, a producer at Disney Educational Media, Latin American liaison for the Sundance Institute, and an adjunct professor of ESL at Hunter College in NYC. She grew up in Brooklyn and holds bachelor’s and master’s degrees in education and linguistics from the University of New Mexico, where she taught remedial freshman English and founded a language school as her master’s thesis. She has lived and taught in Mexico and Venezuela and is a frequent guest lecturer at USC’s Graduate School of Cinematic Arts and the Universidad de los Andes in Santiago, Chile.

Eliseo "Cheo" Torres just recently retired as vice president of Student Affairs from UNM, and is now a part-time faculty teaching traditional medicine, Curanderismo, courses each academic year. Torres regularly lectures and offers a two-week summer class and two online courses on the history, herbal remedies and rituals of Curanderismo to audiences ranging from scholars and students to people hoping to become knowledgeable about alternative and traditional medicine, including lay people and medical professionals. Before coming to New Mexico, his most recent role was vice president for Student Affairs and professor at Texas A&M University-Kingsville.

Torres has published seven books on his life in and research on his subject area. His most recent books include: "Curanderismo: The Art of Traditional Medicine without Borders," and "Curandero: Traditional Healers of Mexico and the Southwest" published by Kendall Hunt Publishing Company, and previously published: "Curandero: A Life in Mexican Folk Healing," and "Healing with Herbs and Rituals: A Mexican Tradition," both available from the University of New Mexico Press.

Dr. James Besante is a proud second-generation Lobo who received his Bachelor of Arts in Sociology from UNM in 2011 and a Doctorate of Medicine from UNM School of Medicine in 2015. He then completed post-graduate medical training in internal medicine at Mount Auburn Hospital, a Harvard affiliated residency program, and addiction medicine specialty training at Mount Sinai Hospital in New York City.

In Manhattan, Besante helped create the telemedicine start-up company Monument, a leading online treatment platform for anyone looking to change their relationship with alcohol. Monument has been featured on numerous media platforms and offers therapist-moderated support groups, video therapy and physician-prescribed medications in 18 states and counting. He remains in an advisory role with the company.

He currently serves as director of the Carle Regional Substance Use Disorders Leadership Center, which coordinates the development of addiction services focused on prevention, treatment and long-term recovery across central Illinois. In this role, Besante is working to build treatment capacity in rural communities. He is also the director of a Project ECHO® fellowship program in Illinois that trains primary care providers in underserved communities to treat addiction. Besante holds an appointment as a clinical assistant professor at the Carle Illinois College of Medicine, the nation’s first engineering-based medical school.

Katya Crawford is an associate professor and chair in the Department of Landscape Architecture, UNM School of Architecture and Planning.

Crawford is an associate professor and chair of UNM’s Department of Landscape Architecture in The School of Architecture and Planning, and is former president of The Council of Educators in Landscape Architecture. Crawford's research focuses on ephemeral landscapes and their power to engage and reveal social and environmental justice systems. Crawford’s work has been exhibited and published both nationally and internationally. Most recently Crawford and two of her colleagues placed 3rd in the international design competition Hornachuelos, and placed 1st in the ideas competition “What’s Up Paris?”

Crawford was born and raised on an organic farm in Northern New Mexico. She has lived and worked in Italy, Spain and Australia but missed the sublime landscape and people of the Southwest. Since 2001, she has dedicated herself to learning and teaching at UNM in the Department of Landscape Architecture. Her primary goals are to foster learning through trust, collaboration and curiosity and to support her students in the quest to design a more sustainable, equitable and beautiful world for all inhabitants.

Katie Witkiewitz, Ph.D., is a regents’ professor of psychology and a scientist at the Center on Alcohol, Substance use, And Addictions (CASAA) at the UNM. The underlying theme of her research is the examination and treatment of substance use disorder, with an emphasis on harm reduction, recovery processes and applying advanced quantitative research methods to better understand changes in alcohol and drug use behavior over time.

Witkiewitz is also a licensed clinical psychologist and has worked extensively on the development, evaluation and dissemination of mindfulness-based relapse prevention for substance use disorder. She trains clinicians in the delivery of mindfulness-based interventions for substance use locally, nationally, and internationally. Her research has been supported by grants from multiple grants from the National Institutes of Health, totaling more than $40 million in research funding since 2004. To date, she has authored six books, more than 260 peer-reviewed publications and book chapters; she has given over 75 presentations and invited talks.

She is currently editor of "Psychology of Addictive Behaviors and Field Editor for Alcoholism: Clinical and Experimental Research." Witkiewitz prioritizes mentoring and has mentored numerous early career faculty, postdoctoral fellows, graduate students and undergraduate students. Her mentees have received numerous accolades, including awards from UNM, National Institutes of Health training fellowships and research grants, and awards and grants from the Research Society on Alcoholism and other scientific societies.

William Baker, after an honorable discharge from the U.S. Army at Sandia Base, Baker graduated with a Bachelor of Science in pharmacy at UNM in 1968 and a Master of Science in padiopharmacy from University of Southern California in 1971. During his residency at Bowman Gray Medical School, Wake Forest University, he learned the art of compounding nuclear pharmaceuticals, the benefits of detailed record keeping system, and saw the potential for centralized Nuclear Pharmacy services.

As an assistant professor at UNM's College of Pharmacy, Baker and Richard Keesee started a centralized nuclear pharmacy that served New Mexico. As the first nuclear pharmacy to be licensed by a Board of Pharmacy, this program at UNM in the early 1970’s was the genesis of centralized nuclear pharmacies throughout the country. He accepted a faculty position at University of Utah College of Pharmacy where he established the Intermountain Radiopharmacy serving the entire state of Utah and several surrounding states. While at the University of Utah, he was actively involved in research and developed a system to label leukocytes for clinicalimaging, and worked closely with the team that developed the first artificial heart. He has served as president of the Intermountain Nuclear Medicine Association, president of the Rocky Mountain Chapter of the Society of Nuclear Medicine, secretary treasurer of the Radiopharmaceutical Science Council, chairman APPM section of Nuclear Pharmacy,  founding director, treasurer, and executive secretary of the National Association of Nuclear Pharmacies, CEO of Pharmaceutical and Diagnostic Services, and president of the Utah Pharmaceutical Association.

He is a distinguished alumnus of UNM and an honorary alumni and professor emeritus at the University of Utah. He volunteered for many years at the 4th Street homeless pharmacy and was awarded the Bowl of Hygeia from the American Pharmaceutical Association in 2003. In 2020, Baker was awarded the Briner Award by APhA for contributions to nuclear pharmacy. He is a longstanding member of the Zambia Mission Board of Directors and has traveled to Africa three times to assist with and encourage their mission.

Manuel D. V. Saucedo was born and raised in Lordsburg, New Mexico, where he lives today.  A first-generation American and the first in his family to attend college, Saucedo earned a Bachelor’s in Business Administration from UNM in 1957.  He served in the U.S. Army, IX Corps Headquarters, Ryukyu Islands (Okinawa), Japan.  Saucedo was honorably discharged and embarked on an accounting career with the Kennecott Copper Corporation in Hurley, New Mexico, and, thereafter, in the company’s corporate headquarters in New York City.  Saucedo returned to UNM in 1974 to pursue his dream of becoming a lawyer and earned a Juris Doctor in 1977.  After law school, Saucedo served as chief assistant district attorney for the Sixth Judicial District (Grant, Luna, and Hidalgo counties) and then served as legislative assistant to Senator Jeff Bingaman in Washington, D.C.  Saucedo returned to New Mexico and served as a Sixth Judicial District judge, including a term as chief judge.

After leaving the bench, Saucedo was in private practice serving Hidalgo, Luna and Grant counties.  He was often appointed guardian ad litem for neglected and abused children and protected adults.  Saucedo has also served his community on the Lordsburg School District Board of Education, the Lordsburg City Council, the New Mexico Border Authority, New Mexico First, the Board of Directors of Hidalgo Medical Services and the Lordsburg-Hidalgo County Chamber of Commerce.  Saucedo actively serves his parish, diocese and wider faith community through appointments to his Parish Finance Council, the Las Cruces Diocese Foundation Board of Governors, the Bishop’s Finance Council and the National Advisory Council to the United States Conference of Catholic Bishops. In recognition of his service, the Bishop of Las Cruces nominated Saucedo for appointment to the Papal Equestrian Order of the Holy Sepulchre of Jerusalem of which he is Knight Grand Cross.

The award recipients will be honored at a reception and awards dinner.