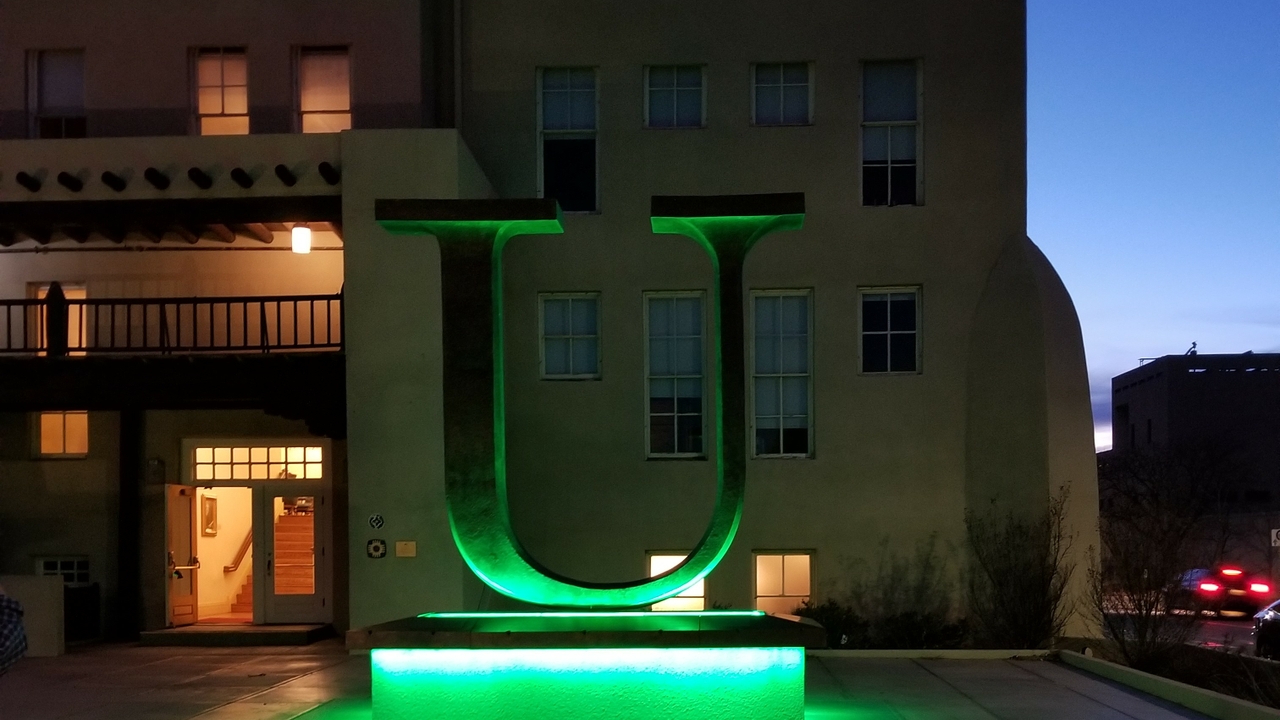 The developing Irish Studies initiative at the University of New Mexico was recently highlighted by the Consulate of Ireland for the U.S. Southwest.

“Thank you to all of our communities for making this year’s Tourism Ireland’s Global Greening campaign a great success yet again,” said Consul General Adrian Farrell, in the consulate’s April newsletter. “Landmarks in Albuquerque, Austin, Cedar Park, Corpus Christi, Dallas, Denver, Houston, Little Rock and New Orleans were among those that were greened to celebrate Ireland’s national holiday.”

In March, the Irish Studies faculty requested UNM Alumni Association turn the ‘U’ statue outside Hodgin Hall green for a St. Patrick’s Day photo opportunity. The picture was featured prominently in the newsletter, alongside photos of other iconic architecture including the Mercedes-Benz Superdome in New Orleans and the Colorado Center Bridge in Denver.

"This recognition is really exciting for us because it helps to put the UNM Irish Studies program on the map,” said Sarah Townsend, assistant professor of English and co-founder of the UNM Irish Studies initiative. “The Consulate has also been a great supporter of our efforts on campus, including our inaugural Mary Power Lecture in Irish Studies earlier this year, so we are glad for the chance to contribute in return to their Global Greening initiative. It's an honor to represent UNM and the southwest in this campaign."

Around the world, more than 300 landmarks in 50 countries were illuminated green as part of the initiative. The annual Global Greening campaign is organized by Tourism Ireland. It’s come a long way from its humble beginnings in 2010, which included only the Sydney Opera House and Auckland Sky Tower green.

“This is the ninth year of Tourism Ireland’s Global Greening initiative and it’s bigger and better than ever this year,” said Niall Gibbons, CEO of Tourism Ireland. “There were some wonderful new additions like the Luxur Obélisque in Paris, the San Mamés stadium in Bilbao, Tower 42 in London and the Mario M. Cuomo Bridge in New York.”

St. Patrick’s Day marks the beginning of the tourism season in Ireland, and the country’s tourism department says it’s capitalizing on the popularity of the holiday.

“Our St Patrick’s programme spans Mainland Europe, North America, Great Britain, Australia and New Zealand, as well as emerging tourism markets like China and the Middle East,” said Gibbons. “We are using every opportunity to capitalise on Ireland’s heightened profile.”