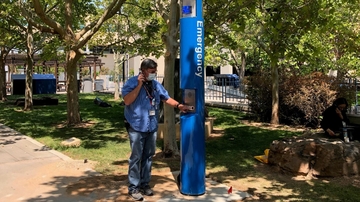 Also, Verizon recently announced expansion access to its 5G Ultra Wideband network to customers in several cities including Albuquerque giving them access to the unprecedented speeds and capabilities of the world’s fastest 5G.** This includes the Code Blue-Verizon small cell nodes recently upgraded on the UNM campus. Customers in 64 cities can now experience ultra-fast wireless speeds, allowing them to download and stream movies and TV shows in seconds, videoconference and collaborate remotely in near real-time, and take advantage of new immersive customer experiences never before available wirelessly.

“This project is a two-fold win for The University of New Mexico," said Mark Reynolds, IT Voice associate director. "First, the emergency phones in the designed locations will be replaced with a new blue pole structure, lights, and faceplate. Secondly, the addition of the small cell technology will be deployed at the twenty-five sites across the main, north, and south campuses where Code Blue poles have been located.”

The agreement, which incorporated feedback from various UNM departments including information technologies, real estate and legal, brings the small cell network to campus to improve overall wireless coverage along with other technological benefits. Moreover, the UNM campus will benefit from the new Code Blue poles that will be installed as part of this project.

“With data usage growing exponentially each year, densifying our network with small cells helps meet the capacity demands of today and tomorrow,” said Desmond Jackbir, director of Network Engineering, Verizon Wireless. “It’s fitting that we are upgrading the Code Blue stations. We build reliability into every aspect of our wireless network to keep customers connected when you need it most.”

“The benefits from this project will enable the University to be better served for cellular coverage for the thousands of visitors, staff, faculty and students. From the safety aspect, this will allow better triangulation for 911 and first responders, city police and the University Police. Having the cellular signal closer to the handset will assist the dispatcher in GPS coordinates for location information in the event of an emergency.”

** Global claim from May 2020, based on Opensignal independent analysis of mobile measurements recorded during the period January 31 – April 30, 2020 © 2020 Opensignal Limited.