In the three short years since the Indigenous Design + Planning Institute (iD+Pi) was established at the University of New Mexico School of Architecture and Planning, the institute’s faculty, staff and students have completed two major projects – one at Ysleta del Sur and the other at Nambe. Additionally, a project for New Mexico Main Street at Zuni is in final draft form and a comprehensive master plan for Taos pueblo is just a few months from completion.

Not only do the projects, faculty and communities offer students hands on experience, but the students also revel in the joy of providing meaningful community service.

The need for iD+Pi’s services is matched only by the desire of the institute to meet community needs. Under the leadership of Ted Jojola, Distinguished Professor and Regents’ Professor of Community and Regional Planning, iD+Pi is making inroads with indigenous communities in New Mexico and beyond.

The Navajo Nation
“We are in the midst of negotiating a service contract with the Navajo Nation that will serve as a template for future projects,” Jojola said, noting that approval is expected by September.

That doesn’t mean, however, that Jojola is waiting for the ink to dry before actively engaging Navajo communities. “We are working on a Chaco Canyon assessment plan. We are in contact with chapters in the area to look at the economic development potential that tourism provides in the area,” he said.

At Cochiti pueblo, iD+Pi is developing a plaza preservation plan. Amanda Montoya, iD+Pi program specialist from Taos pueblo, said that they developed an architecture and children program by “training the trainers” – in this case the teachers who work with children.

“They learned to talk to the children about plaza revitalization and helped them to express what they want to see in their plaza,” she said. A Keres language component was included, which was a challenge since the language is not written.

“The Keres word for ‘window,’ like many other architectural terms, were replaced by Spanish or English,” Montoya said. “Through these workshops they rediscovered the real Keresan phrase to describe these things.” 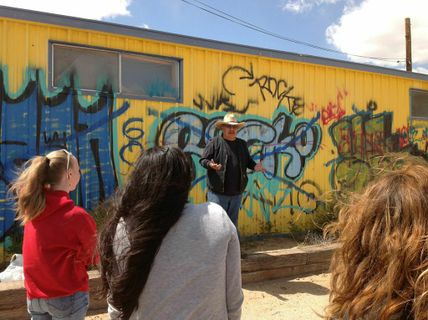 Jojola said that during a debrief with Kevin Lewis, Cochiti pueblo education director, they learned of the disconnect between abstract architectural terms and the scope of the Keres language.

A wonderful thing happened. “It provoked conversation. It caused the summer staff and kids to talk to their parents and their parents’ parents about the words and phrases that are true to the native language rather than adaptations, like the word ‘ventana,’ which is the word for window borrowed from Spanish,” Jojola said.

“The project captured a lost part of the language through these buildings. It brought up values, meanings and symbolism that was unexpected,” he said.

During the Cochiti Summer Youth Language Program, children started learning other words in Keres. “They explored the language beyond colors and food. It allowed abstract-minded kids an opportunity to grow in the language,” Jojola said.

And whereas before, the children looked at the plaza with disdain, wondering why old buildings weren’t torn down, now they wanted to know why they couldn’t be rebuilt.

Montoya said that Cochiti pueblo is working with Tony Atkin of Atkin Olshin Schade Architects (AOS) in Santa Fe on the historic village area. “They asked iD+Pi to hold community meetings to get feedback on the way they want to revitalize the plaza.”

Jojola said an exhibit will be developed and put on display in the post office. It will show the findings from AOS, which will be useful to for the upcoming community meetings. “The goal is to develop consensus on restoration of the plaza area.”

Nambe Pueblo or Nanbé Owingeh
What started as a request from the National Park Service to assess the condition of the buildings around Nambe plaza became much more. “If no intervention takes place in the next 10 years, the buildings will be gone. The adobe is destabilized because of moisture,” Jojola said.

To understand why the degradation occurred, iD+Pi had to look at social, physical and cultural causes, Jojola said. Nambe has a rich agricultural history. Fields were cultivated around and adjacent to the plaza. “The life of the community was growing crops that provided for the community,” he said.

Students used aerial imagery to reveal the extent of agricultural land use in and around Nambe pueblo. “Over the course of history, especially after World War II when they went to a wage economy, the infrastructure that supported agriculture declined,” Jojola said. 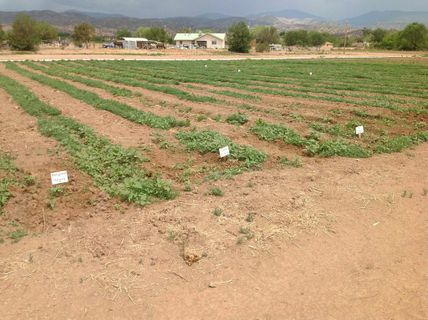 Agriculture is part of Nambe's heritage.

Nambe ancestors were adept at using a ditch network to divert surface water to fields and away from the plaza. “After the people stopped planting, the ditches weren’t maintained. The main road that went into the plaza became an inadvertent watershed,” Jojola said. The runoff traveled along the roadway and straight toward the plaza. Montoya added, “It is eroding the traditional plaza buildings.”

It is clear that the ditches need to be reestablished for drainage before work can be done on the buildings. “Ultimately, farming projects need to come back to the plaza,” Jojola said.

Visiting Professor Lynn Paxton brought her students from Iowa State to develop designs for one building at the pueblo. “Many of the students had never been west before,” she said, adding that they came up with lots of ideas.

iD+Pi also created three, three-dimensional models of Nambe: past, present and future. “Those models are to the be a centerpiece of a new museum at Nambe. Nambe pueblo is working with the IAIA [Institute of American Indian Arts] on that,” Montoya said.

Another challenge for Nambe is that the sense of ownership has changed. “Yards, fences and barriers affect the communal nature of the plaza. Building consensus is harder now,” Jojola said.

Planners Plan
As a growing, vital institute within the University of New Mexico, Jojola, Montoya and their collaborators are hard at work on a strategic plan that will guide them.

“We engaged all our affiliates – tribal, academic, student and professional. We brought in people from Ysleta del Sur and Nambe to get feedback on their experiences with iD+Pi.

They established strategic directions that guide them to strengthen their core identity, widen the circle and share the knowledge.

Their greatest challenge is financial resources. They plan to go the State Legislature again next year, working with UNM’s priorities as well as those of the Native American Caucus.

And they know there are people out there who recognize iD+Pi’s good work and want to be a part of it. To donate, visit: Indigenous Design + Planning Institute .