“I’ve tried to help people understand that they are preparing to be leaders, not simply to make money or have a job, but to change lives,” said Hrabowski in an interview before his visit to UNM.

Growing up in Birmingham, Ala. in the 1950s and 1960s, Hrabowski got a firsthand look at the Civil Rights Movement happening around him, even participating in the Children’s Crusade of 1963. Now, decades later as a University president and renowned educator, he said it was those experiences that led him to develop programs aimed at boosting educational success in science, technology, engineering and math (STEM) for African American students and others.

“When you’re looking at health disparities, we’re talking about multi-billion dollar challenges where all the research is being done by people who are not from the [minority] groups. If anything tells you the challenge we face in our country, it’s that.” – Dr. Freeman Hrabowski, III

In 2012, President Barak Obama named Hrabowski chair of the newly created President’s Advisory Commission on Educational Excellence for African Americans. That same year, he was named one of Time magazine’s “100 Most Influential People in the World.” Hrabowski, a mathematician by trade, has been honored by the American Academy of Arts & Science and has received the prestigious McGraw Prize in Education. He was also recently featured on CBS’s 60 Minutes, for his university’s continued achievements in innovation and excellence. 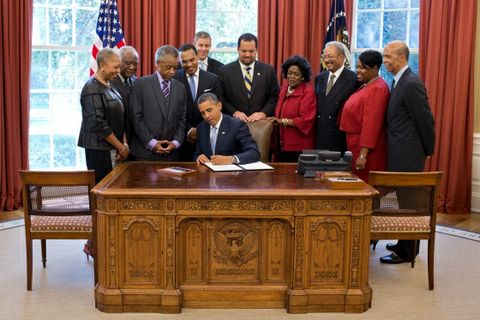 Freeman Hrabowski (fourth from the left) pictured with President Barak Obama during the signing of the White House Initiative on Educational Excellence for African Americans Executive Order.

“When you’re looking at health disparities, we’re talking about multi-billion dollar challenges where all the research is being done by people who are not from the [minority] groups,” said Hrabowski. “If anything tells you the challenge we face in our country, it’s that.”

He said while the statistics are shocking, he does believe change is possible.

“It’s a multi-dimensional approach,” Hrabowski said. “It’s working with the whole culture in America to get people to stop thinking, ‘math and science is not for me.’”

Along with an emphasis in self-belief, the longtime educator said society must do a better job improving reading skills among elementary aged children. Hrabowski said, many times, people think the key to success in STEM is the specific science, technology, engineering or math, when in fact it’s reading and comprehension skills that truly help students succeed in the STEM fields.

For minority groups, Hrabowski said exposure to future possibilities is also extremely important. He said many African American children, for example, have never seen an engineer or a researcher that looks like them, something he thinks needs to change.

“Most importantly, besides the sense of self, it’s about what we call at UMBC ‘grit,’” Hrabowski said. “We make the mistake of saying, ‘oh, he’s smart in math.’ I mean, I finished my math major at 18, but it doesn’t mean I’m any smarter than anybody else. I was just working hard. I still work hard.”

Hrabowski met with UNM administrators as well as University and Albuquerque Public School students during his visit. He also took time for a book signing of his new book, Holding Fast to Dreams: Empowering Youth from the Civil Rights Crusade to STEM Achievement.

For more information on a variety of other events celebrating Black History Month, click here.