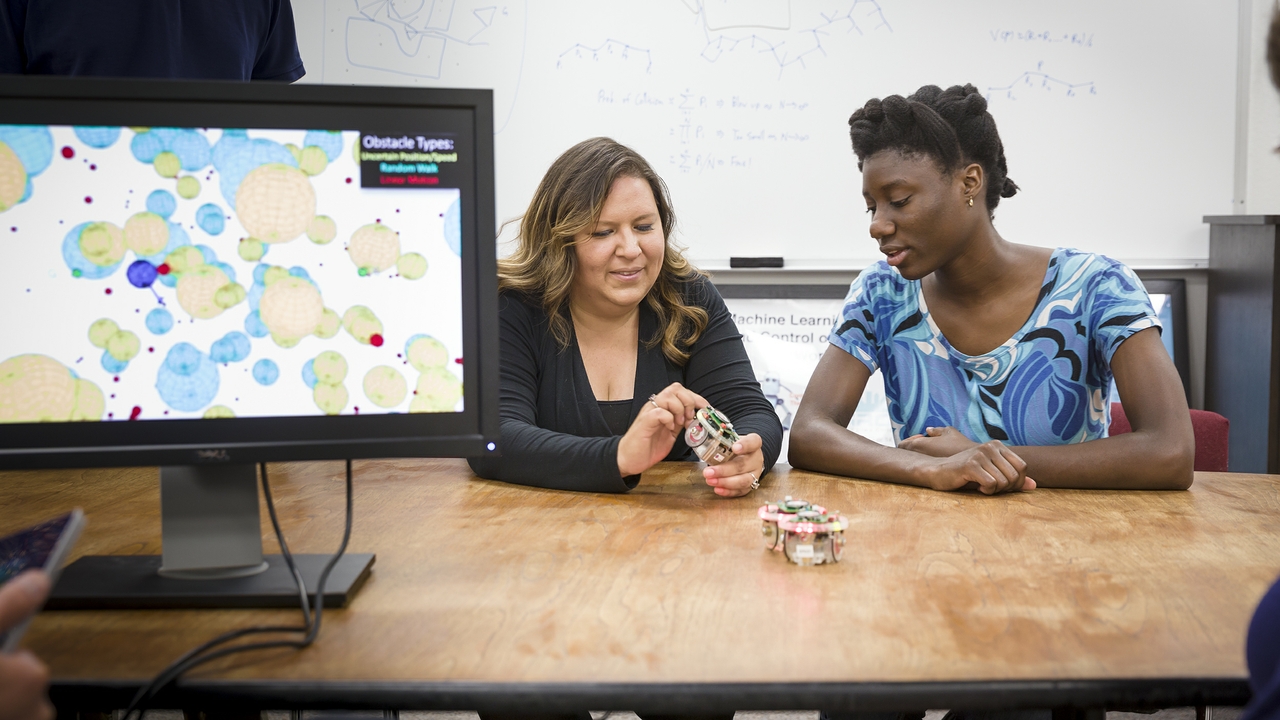 UNM modeling the future of diversity in computer science

The University of New Mexico School of Engineering’s department of computer science is leading the transformation to a more diverse landscape for faculty in the field.UNM has significantly more female faculty than average departments across the country, according to data from a national study.

“UNM is creating an environment of inclusion.” - Christos Christodoulou, Jim and Ellen King Dean of Engineering and Computing

While the national average of women faculty at CS departments hovers around 20 percent, the UNM department of computer science faculty is 40 percent female. In addition, 25 percent of UNM computer science faculty are women from underrepresented minority populations, compared to only 1 percent nationally according to the 2016 Computing Research Association Taulbee Survey, released in 2017.

The female faculty at the UNM department of computer science include tenure-track faculty, lecturers and research faculty, all serving as models for students thinking of choosing computer science as a career.
CS isn’t the only program increasing diversity at UNM.

“With the ADVANCE at UNM initiative and outreach programs like CSforAll, which connects diverse populations around the state to teach computer science fundamentals, UNM is creating an environment of inclusion that is attractive to females as well as those from diverse backgrounds,” said Christos Christodoulou, Jim and Ellen King dean of engineering and computing. “Computer science is one of the fastest-growing fields and essential to ensuring our place in the economic pipeline of the state and preparing citizens for the workforce of 2030.”

UNM’s CSforAll is a National Science Foundation-funded project designed to teach both high school teachers and their students the value of computer science and how to use it to solve problems. The effort, led by Melanie Moses, associate professor of computer science at UNM, has been particularly effective in reaching young women and students from cultural backgrounds that are not often in the computer science field. CSforAll was also added to the UNM core curriculum as CS108L. More than 1,200 undergraduate and high school students have taken the course, and over 70 percent of them are women or underrepresented minorities, Moses said.

Also, in 2016, UNM was awarded a 5-year, $3.3 million National Science Foundation grant for an initiative called the ADVANCE Institutional Transformation Program to recruit, retain, and advance women and minority STEM faculty. ADVANCE supports faculty and collaborates with UNM leaders to change processes and policies that impact women and minority faculty in STEM. The program aims to enhance the recognition of scholarship by all women STEM faculty at UNM.

The female faculty have led the organization of several organizations and events to outreach to underrepresented minorities in computing, including women. Estrada organized IEEE International Parallel and Distributed Processing Workshops, Tapia organized the Robot Guru professional development workshop series, and Moses organizes the NASA Swarmathon robotics programming challenge. Tapia and Moses are steering committee members and speakers for the Computing Research Association (CRA) Graduate Cohort mentoring program for underrepresented minorities and persons with disabilities, and Tapia has served as a speaker for several years at the CRA Graduate Cohort for women and founded the Lobo Women in Computing group, which Estrada now manages. Collectively, these programs support thousands underrepresented students across the nation.

In addition, Albuquerque itself is becoming known as a tech-friendly place for women. According to a recent study by Smartasset, a personal finance company, Albuquerque ranks fifth in the nation as the best cities for women in tech. The study considered four factors: gender pay gap, income after housing costs, women’s representation in the workforce and percent growth in employment.

The Taulbee survey, conducted annually, documents trends in student enrollment, degree production, employment of graduates, and faculty salaries in academic units in the United States and Canada that grant the Ph.D. in computer science, computer engineering or information.