Pedro Javier Rodriguez, a United States Marine Corps Captain and Naval ROTC instructor at the University of New Mexico, is headed to Los Angeles to be a contestant on the TV show American Ninja Warrior.

The popular reality show is a sports entertainment competition in which contenders try to complete a series of challenging courses which increase in difficulty, called stages.

Rodriquez was selected as a contestant on American Ninja Warrior from over 3,000 video submissions. He’s a marathon runner but is the first to admit that being in good shape is not enough to make it through the four stages of intense obstacles presented to competitors.

“It takes an extreme amount of training to learn all the required techniques, not to mention honing mental acuity and courage,” Rodriguez said. “You’re tackling these obstacles at sometimes great heights, jumping and swinging your entire body from one pole to another or hanging on narrow ledges by your fingertips. A lot of the positions are unnatural to human movement.”

Monday through Friday, 11 a.m. to 2 p.m., Rodriguez can be found preparing for the upcoming event at Ninja Park, a training center in Albuquerque that houses obstacles similar to those seen on American Ninja Warrior. He works with coaches on different obstacles such as the Warped Wall, Salmon Ladder, Spider Jump and Laches. A couple of the coaches were contestants on the show.

Born in San Juan Puerto Rico, Rodriguez is no stranger to competition. He had to compete against dozens of high ranking officers to be selected for ROTC faculty at UNM, where he currently teaches Amphibious Warfare and the Evolution of Warfare. 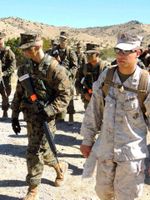 “Students come to me as freshmen, most with no military background,” Rodriguez said. “I take them from civilian status and get four years to make them into officers. That’s a rewarding experience for me; to see them grow in leadership skills, physical fitness and command presence. Because I want them to lead by example, I try to lead by example. That’s a major reason I’m doing Ninja Warrior. My pupils are 15 years younger than me, on average, so I strive to outperform them wherever I can. My intention is not to make them feel bad, but to show them what can be accomplished.”

A Marine for 16 years, Rodriguez served two tours in Afghanistan and countless deployments where he functioned as an air support officer, the guy responsible for the assignment and integration of aircraft employment as needed on the battlefield, which includes close air support, assault support and medevacs.

He credits his wife, Alma, for keeping him grounded and running a tight ship at home. “When I deploy, she’s there with the kids and the dog holding it all together. She’s one of my biggest supporters, in everything I do. I’m a lucky man,” Rodriguez said.

The program Rodriguez will be competing in is a special “Military episode” scheduled to air Monday, June 29 on NBC. It is being taped aboard the 45,000 ton battleship USS Iowa anchored in San Pedro Harbor.