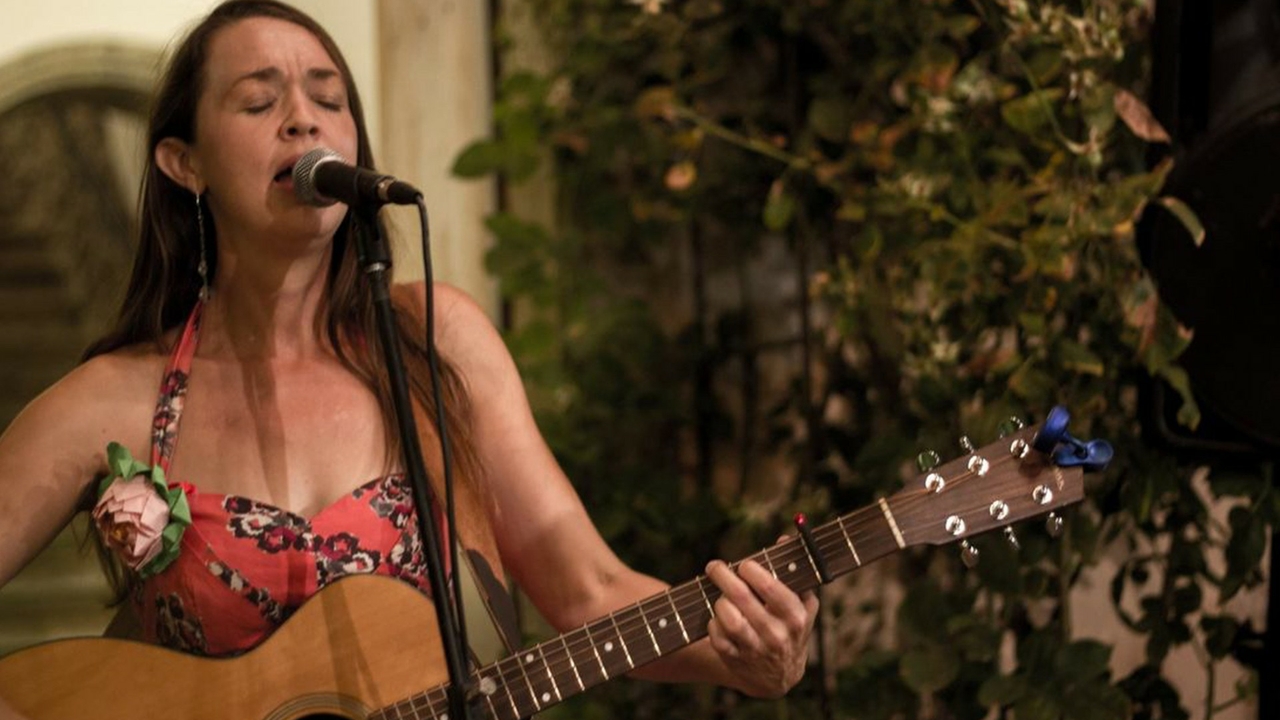 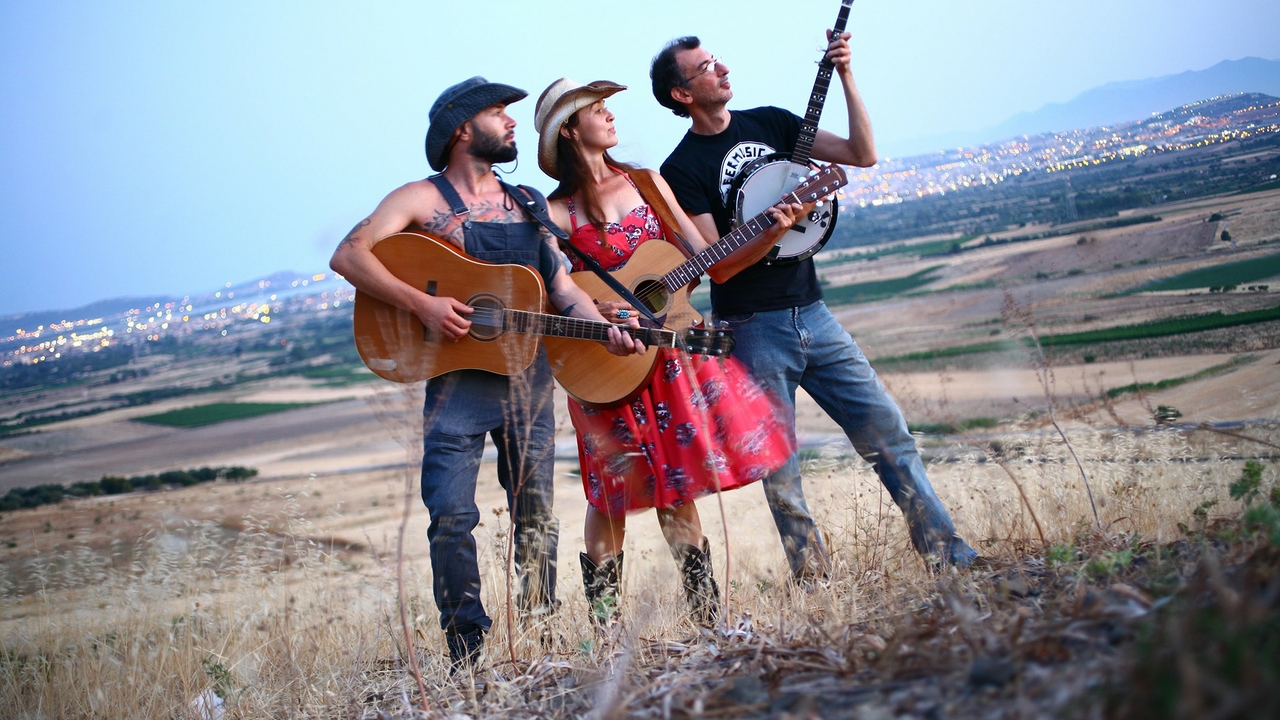 Kristina M. Jacobsen, UNM associate professor of Ethnomusicology, performs with musicians in Sardinia as part of her Fulbright award research.

“This grant allows me to live in Sardinia, Italy, for one year to do ethnographic fieldwork for my next book project. It also provides me an affiliation with an Italian university, in this case the University of Cagliari’s Department of Literature, Languages and Cultural Heritage, where I will be hosted as a Visiting Researcher for the fall 2019 semester,” Jacobsen explained.

Sardinia is an island west of Italy in the Mediterranean Sea. Jacobsen noted that the culture has surprising similarities to the Diné culture in New Mexico.

“I have had the incredible privilege to live on the Navajo Nation, on and off, for almost 20 years, and, more recently, to work as an anthropologist in that place. My entry into that world was through language and wanting to learn Navajo as a teenager. Arriving in Sardegna, some 18 years later, I have been struck by the many connections shared by these two places,” Jacobsen observed.

Many Sardinians and Diné people were, and still are, sheepherders, have survived multiple eras of colonization – including by Spain– and practice languages that are currently at risk due to hegemonic languages from outside that are imposed on these places and on these communities. So, language reclamation and revitalization are key in both places, she said.

“In addition, Sardinia has ‘autonomous region’ status in Italy, or the ability to self-govern in key ways. This is very similar to the sovereign status of federally recognized tribes in the United States and the complicated entanglements this creates between Indigenous nations, states and the federal government, including the Navajo Nation. So, there is a tension built into the legal relationship between these places and the larger nation-states that surround them, whether that’s Italy and the United States,” Jacobsen noted.

Jacobsen is splitting her time on Sardinia learning the languages, writing songs, performing and teaching.

“In Sardinia, I am dividing my time between a small mountain village and the city of Cagliari. In the village, I am focusing on learning Sardo, or Sardinian, a language completely separate from Italian and which boasts four mutually unintelligible variants, becoming a part of daily village life, including performing at the village Saint’s Day celebration on August 20 (La Festa di San Lussorio), jamming with local musicians, and attending music and language events across the island. I have also begun writing songs with Sardinian songwriters in order to create musical connections across the island but also as a form of collaborative fieldwork methodology, where I’m using the cowriting of songs as a sort of open-ended interview with each of my fieldwork interlocutors,” Jacobsen said.

“In the city, at the university, I will be giving guest lectures and offering workshops in ethnomusicology, collaborating with colleagues on new publications and research projects, and hopefully also participating in a weekly laboratorioon learning to sing in the cantu a cuncordustyle, an a cappella, multipart singing style unique to this island and designated by UNESCO as a form of Intangible Cultural Heritage which is excruciatingly beautiful. So, I’m learning how to have beginner’s mind, learning from scratch, where everything (even doorknobs!) is new, unknown, and each new success, however small, feels like a major victory,” she continued.

The Sardinia experience will help Jacobsen in her UNM classroom when she returns, and she hopes some of the musicians she meets will come to New Mexico.

“As an ethnographer, I always bring pieces of what I’ve learned from the field —methodologically, anecdotally, and in terms of material covered — into the classroom. This keeps the teaching experience alive for me, and for my students, as well. One course I am considering developing when I return, based on my fieldwork experiences in Sardinia and in mainland – Il continente– Italy, is a course of Mediterranean music, to include traditional and popular music of Sardinia, Corsica, Sicily, and the south of Italy.

"This course would also include a strong field methods component, drawn directly from my own fieldwork experiences acquired this year while I am here, where students learn how to document the worlds around them through recording, video, field notes, photography, sketching and other, more culturally-specific forms of documentation. And, I’m excited to invite the many musicians and scholars I’m meeting.

“This Fulbright grant is invaluable in its ability to provide research support at a crucial stage in my own professionalization as a recently-tenured associate professor. Often, anthropologists and ethnomusicologists are only able to have one, deeply immersive fieldwork experience, which typically becomes the dissertation and first book project, and then go on to write more theoretical works after this first project based on other forms of research.

"In my case, I have the luxury of fully developing a second fieldwork-based project in order immerse deeply (one of the key tenets of anthropological fieldwork) in a small mountain village where Sardinian is the primary language known for its singing traditions, and then using these ethnographic experiences as the foundation for my next book and musical recording project, tentatively titled Sing Me Back Home: Songwriting, Language Reclamation, and Italian Colonialism in Sardinia,” Jacobsen concluded.

A bluegrass song Jacobsen cowrote with a Sardinian musician sung and written in the Sardinian Campidanese language.

Jacobsen is one of over 800 U.S. citizens who will teach, conduct research, and/or provide expertise abroad for the 2019-2020 academic year through the Fulbright U.S. Scholar Program. Recipients of Fulbright awards are selected on the basis of academic and professional achievement, as well as record of service and demonstrated leadership in their respective fields.