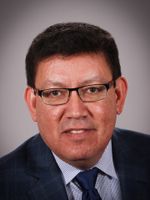 Previous experiments show that positively charged poly(phenylene ethynylene) (PPE) and oligo(phenylene ethynlene) (OPE) could attract and kill the bacteria. That left the collaborators with a layer of biofilm debris attached to the surface.

The technical problem in this research was to effectively detach the bacterial debris from the surface for disposal.

That involved constructing a useful surface. That was done used interference lithography, a technique in which lasers are used to carve tiny channels in a surface. The technique was initially developed by another UNM researcher, Steve Brueck for use on computer chips.

The researchers report the technique “was used to create nanopatterns of initiators, which were then used to initiate atom transfer radical polymerization of the polymer poly(n-isopropylacrylamida) or PNIPAAm.” Ista and López had previously determined that this polymer could release attached bacteria and biofilms after undergoing a change in temperature. After the nanopatterned polymer was formed, PPE was then introduced into the “valleys” between the polymer chains. The combined materials was able to repeatedly attach, kill and release bacteria.

“In a medical setting, say you have a countertop that you wanted to keep clean. If this system is incorporated into a countertop, then you could collect and kill the bacteria at room temperature, then come by with cold water and wipe it off,” said Ista.

In human terms, the surface could be applied to the biofilm that forms on a urinary catheter. It could be washed with cold water to release the accumulated bacteria and slow or prevent the fouling that leads to urinary tract infections. Or the surface of the catheter could be constructed in in a way to release bacteria after a PH shift, such as when a person urinates.

The National Institutes of Health reports that there are more than a million urinary tract infections in the U.S. annually so the research could eventually be applied in the health field.

This is basic research and could be used in many ways. A different way to use the technology might be in applying a coating to the hulls of ships to hinder fouling. In another, bacteria could be captured and killed and then released into a detection system, which would have a direct application to detecting biological warfare agents.

Because the researchers were able to attract bacteria to a surface, kill them and release the bacteria debris multiple times this system would be resettable, and usable more than once, an important consideration on a battlefield or in mobile response units, where space for sampling devices is limited.

This paper is the culmination of a five-year research grant from the Defense Threat Reduction Agency (DTRA).