For the University of New Mexico’s LOBOMotorSports team, it’s been a sweet few years. The team did well at the Formula SAE competitions, and seemed to do better each year. In 2014, the team placed 11th overall. In 2013, they took 12th place, and the team recorded a 10th-place finish in 2012.

But at this year's Formula SAE competition in Lincoln, Neb., the team placed 33 overall out of 80 international entries, lower than their performance in recent years.

John Russell, director of UNM’s Formula SAE program and Halliburton Professor of Mechanical Engineering, said the team’s overall finish was not what they were hoping for, but it’s all part of the up-and-down nature of racing. 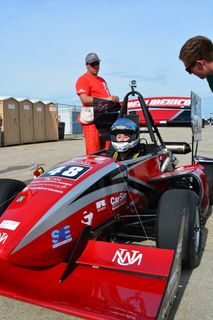 “We’ve had three lucky years, but this year, there was a horrible sequence of events — things broke and we got behind all the time,” Russell said. “But hey, that’s racing.”

As Russell explains, one setback or problem cascades throughout the rest of the competition. For instance, lost time caused problems in the skidpad event, where the team wasn’t able to fix a problem before time ran out, costing them 50 points. A failure in the endurance event was due to engine failure, and not finishing the event costs 400 points.

“Before the failure, we were running highly competitive lap times,” Russell said. “If we projected those lap times and completed the event, we would have finished in the top 10 overall.”

There were some bright spots in some of the individual competitions: the team scored fourth place in business presentation and 15th place in engineering design.

Russell commends the efforts of mechanical engineering student Kelsey Johnson, who wrote and presented the highly-ranked business presentation. She was also the program’s first female driver in the competition.

Although Russell said he and the team were discouraged about the setbacks this year, the program is a learning experience that ultimately benefits students.

“What they see when they get out there is real engineering,” he said. “While winning is one of my goals, it’s not the primary goal. My primary goals are for them to learn project management, learn systems engineering, and learn to work on a team, and they do all those things.”

Russell said another goal for the 2016 team is to finish the car much earlier, which would give them time to test and correct problems before competition.

He’s optimistic and ready to get to work on the next year’s car.

“The team gets tremendously disappointed sometimes, but life goes on,” Russell said. “We try to take the mistakes and learn from them.”

Russel started the LOBOMotorSports Formula SAE program at UNM in 1998 by Russell. It has evolved into a three-semester program in which students take three courses worth 10 credit hours: Racecar Design and Dynamics, Racecar Build Lab, and Racecar Test Lab, culminating in the Formula SAE international competition each June in Nebraska.

Recarnation donates use of vehicles to UNM engineering programs