A reception opens the event from 6 to 7 p.m., followed by Younger’s presentation at 7 p.m. and a Q&A session after the talk. The event is free and open to the public. To register visit, Global Security Distinguished Lecture Series. 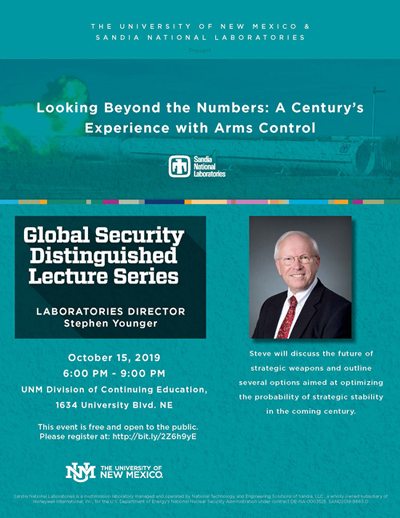 The United States has a century’s worth of experience with strategic arms control. Starting with the naval treaties of the 1920s and 1930s, national leadership struggled to reduce the probability of future conflict by limiting the number and types of weapons.

A combination of rapid technological development, combined with clashing national ambitions, overcame the best efforts of the arms control community. During the latter half of the 20th century, treaties limited the numbers of nuclear weapons and limited their spread to a handful of countries. However, technological advances and new international tensions raise new concerns about the future of strategic weapons.

Younger, who is the director of Sandia National Labs where he provides leadership and management direction for the safe and secure implementation and execution of all Sandia missions, will discuss how theses treaties succeeded in their near-term objectives, but failed to prevent the Second World War. He will also outline several options aimed at optimizing the probability of strategic stability in the coming century.

Younger is a Fellow of the American Physical Society and has published extensively in atomic theory, plasma physics, anthropology and national security.