Three University of New Mexico students, Joseluis Ayala, Anthony Chavez and Christina Faris, are on their way to Washington, D.C. to participate in the U.S. State Department’s highly-selective internship program.

Ayala and Chavez will be interning in the Bureau of Diplomatic Security, and Faris in the Bureau of Oceans, International Environmental and Scientific Affairs during the ten week summer program.

The U.S. Department of State Student Internship Program is an unpaid, intensive internship which offers U.S. citizen undergraduate and graduate students a chance to witness and participate in the formulation and implementation of U.S. foreign policy.

Interns work closely with representatives of the U.S Department of State’s Foreign and Civil Services. The program is both professionally and academically beneficial, providing participants with hands-on experience in a federal agency setting, and insight into the substance and daily operation of U.S. foreign policy.

Also in attendance were former Ambassadors Edward Romero (1998-2001, Spain) and Ambassador Will Itoh (1995-1999, Thailand), both Albuquerque residents. They shared brief histories and memorable anecdotes of their time serving the U.S. as ambassadors.

State Department internships are offered three times a year, and students have the option of interning at overseas embassies and consulates. Recent graduate C.J. Aragon, who also attended the reception, shared his experience as an intern in 2013 at the U.S. Embassy in Buenos Aires. Current UNM student Tacarra Lake is wrapping up an internship at the U.S. Embassy in Warsaw.

“I couldn’t be happier that these three outstanding UNM students are off to Washington, D.C.,” said Anne Callaghan, UNM Diplomat in Residence. “This is a great opportunity for them to see diplomacy in action, and I hope that this inspires them to pursue careers in international affairs. We want our diplomats to represent the dynamic diversity of America, and the State Department has a Diplomat in Residence in New Mexico for just this reason. I'm spreading the word on what we do and looking for talent for our internships, fellowships and careers.” 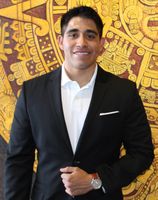 Joseluis Ayala
Ayala is a junior studying International Studies conflict, peace and diplomacy in Eurasia and Foreign Languages: Arabic and Russian. He is a first generation American; Spanish is his first language. He was a distinguished member of UNM's Naval Reserve Officer Training Corps, earning the American Legion military excellence medal. He is also a scholar in UNM's National Security Studies Program and a recipient of the coveted IIE Boren Scholarship.

"This opportunity is exciting, and I am thrilled to see what I will do with it."

Anthony Chavez
Two years ago, Chavez faced one of the hardest decisions of his life: re-enlist in the United States Marine Corps or discharge honorably to return to college and complete his degree. He chose the latter.

“The University of New Mexico has given me the educational tools necessary to pursue a career in government,” Chavez said. “I have served my country in military operations and now I have the opportunity to serve it in diplomacy, as an intern with the United States Department of State. Whether it’s serving my country in a uniform or a suit, I will continue to serve in whichever way life takes me.” 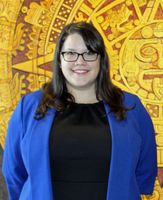 Faris, a native New Mexican, is currently in the Master of Science program in the Department of Geography and Environmental Studies. Her research focuses on human-environmental geography and natural resources management. She received both of her undergraduate degrees from UNM in creative writing and international studies.

Upon completing her graduate studies, Faris hopes to work directly with government agencies or international organizations with similar ideals emphasizing sustainability, environment and culturally sensitive goals. Her intention is to pursue public and community improvement efforts to advocate for the sustainable management of environmental resources and equal representation across all inequalities.

“I am incredibly thrilled and honored to intern with the U.S. Department of State Bureau of Oceans and International Environmental and Scientific Affairs,” Faris said. “This internship opportunity is critical for my professional development and will be tremendously helpful in preparing me for a federal or state-level career in natural resources management.”