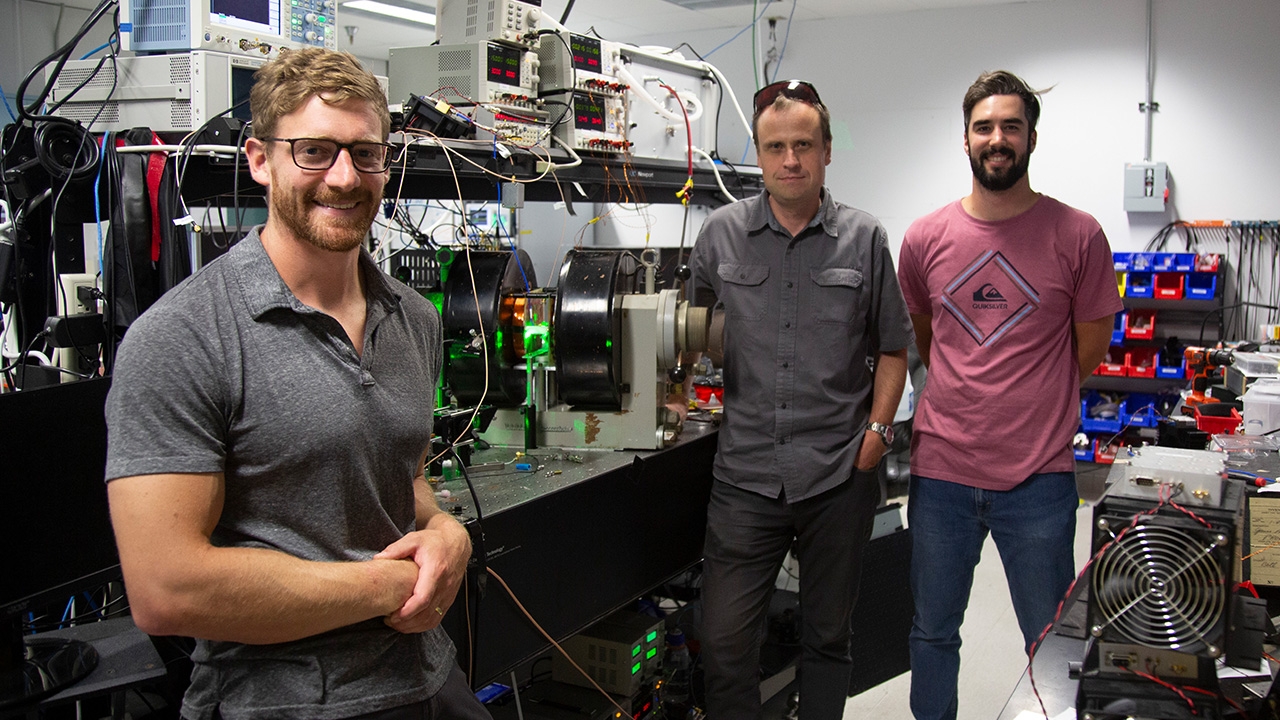 A team of researchers from The University of New Mexico and its Center for High Technology Materials (CHTM) recently published a new paper in the journal Science Advances detailing their work in developing a quantum sensor for determining the chemical composition of trace quantities of samples.

The paper is titled Two-dimensional nuclear magnetic resonance spectroscopy with a microfluidic diamond quantum sensor. The technology could have a big impact on numerous scientific fields, ranging from analytic chemistry to single-cell biology.

The team is led by Victor Acosta, assistant professor in the Department of Physics & Astronomy and CHTM, in conjunction with Andrey Jarmola, University of California, Berkeley Department of Physics, and CEO of ODMR Technologies Inc. The co-first authors are graduate student Janis Smits, who is affiliated with UNM and the University of Latvia Laser Center, and CHTM post-doc Joshua Damron.

Acosta compared the nuclear magnetic resonance (NMR) technology to MRI machines used to scan a whole human body. A key difference is the diamond quantum sensor NMR technology his team is developing can detect and identify tiny, trace quantities of molecules in fluids (or even individual cells) as small as one picoliter – one-trillionth of a liter.

"NMR is like a single pixel in an MRI, except it gives more quantitative information about the molecules that are present," he observed.

The sensor is comprised of nitrogen-vacancy defects in diamond, a quantum system that can be used to optically detect the magnetic fields produced by the nuclei in molecules, Acosta explained. Different molecules have specific magnetic resonance properties that are converted by the sensor into different fluorescent intensities of red, which can be detected and then identified by the device.

As they report in their paper, the researchers integrated a diamond quantum sensor into a microfluidic platform that shuttled fluids between a strong permanent magnet – “like refrigerator magnets,” he explained – and a carefully-controlled electromagnet. They were able to register NMR spectra of picoliter-volumes of fluids with a higher sensitivity and spectral resolution than was possible in previous work. This allowed them to perform, for the first time with diamond quantum sensors, two-dimensional NMR spectroscopy, an important technique for quantifying the molecular composition of complex bodily fluids and identifying the structure of proteins.

NMR spectroscopy is of great interest to numerous researchers and industries. The development of new NMR methods has garnered six Nobel prizes in the fields of physics, chemistry, and medicine, Acosta said, adding “That’s how important it is.”

*** This study was funded by a NIH National Institute of General Medical Sciences award 1R41GM130239-01 and a Beckman Young Investigator award. Smits received support from the Latvian Government (A5-AZ27, Y9-B013).