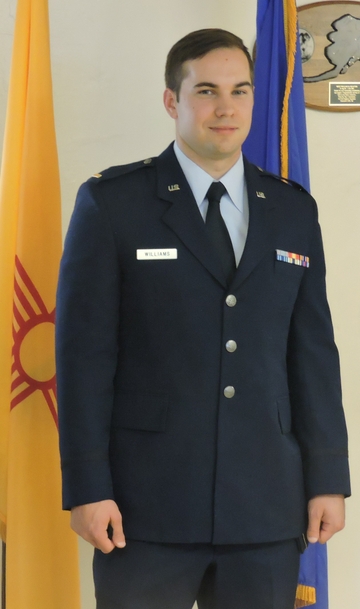 The U.S. Space Force (USSF), founded in 2019, is organized as a military service branch within the Air Force, one of the three military departments within the Department of Defense.

Williams graduated last month from The University of New Mexico with a bachelor’s degree in mechanical engineering.

“When I first enlisted into the Air Force, I felt honored to join the long-standing legacy of airmen who served before me,” he said.

As a Space Operations Officer, Williams will help direct the entire system utilizing satellites that enhance our communication and tracking and will also oversee space surveillance.

Williams said his interest in space began after researching different degrees he could pursue in the field.

“I saw information about an astronautical degree program,” Williams said. “It led me to find out that the Air Force has a space component.”

Initially, that space component was called the Air Force Space Command (AFSPC).  However, last year the AFSPC was re-designated as the U.S. Space Force. It remains the smallest U.S. armed service within the U.S. Department of Defense.

“Having now earned my commission into the USSF, I feel a sense of pride and responsibility knowing that I will have a role in the newest branch during its infancy,” Williams said. “Part of that role will be assisting the USSF in maintaining and enhancing the competitive edge of the Department of Defense in space while adapting to new strategic challenges.”