It is often said that UNM is a “city within a city.” The New Mexico Environment Department agrees, and has designated UNM as a “large water system” due to over 40,000 people using UNM’s water consistently. Because UNM is a “large water system,” it is bound by the same regulations as the City of Albuquerque with regard to purity, cleanliness, testing  and licensure.

With drought expected to continue in the southwest well into the future, proper stewardship of groundwater is imperative. Water is the most precious and limited resource in the southwest and the Physical Plant Department (PPD) is responsible to ensure that campus water is clean and usable. PPD takes great lengths to conserve this resource and continues to be committed to reduce water waste on campus.

The University installed groundwater wells in 1903 to have a clean and usable water source on campus. This water is used to irrigate the landscaping and golf courses, provide potable water for drinking and cleaning, and for student housing and research labs. There are only a few buildings on campus that are connected to the city water system.

“Climate changes pose challenges for an already parched region that is expected to get hotter and, in its southern half, significantly drier. Severe and sustained drought will stress water sources, already over-utilized in many areas, forcing increasing competition among farmers, energy producers, urban dwellers, and plant and animal life for the region’s most precious resource.” – National Climate Assessment

Back in the mid-1990s, during the department’s renewed emphasis on energy conservation initiatives, PPD began looking at where water resources were being used on campus and found that 40 percent of the water being pumped from the UNM wells were used for irrigation. The PPD Grounds and Landscaping division began looking at the irrigation infrastructure and the design of the landscape and decided that a significant amount of water could be saved if they invested in upgrading irrigation systems and landscaping. With the removal of over 20,000 square feet of turf in small beds and planters, and the installation of programmable and efficient irrigation systems, there was a 39 percent reduction in irrigation water usage by 1999.

The PPD Utilities division also uses well water to heat and cool the campus. Massive boilers create steam to heat the buildings, and chilled water is used to cool the buildings. At the Ford Utilities Center, large cooling towers are located at the top of the building, acting like an enormous swamp cooler, “raining” water through pads that cool the water. Visiting these towers is spectacularly beautiful and essential to creating a hospitable environment for occupants of UNM’s buildings.

White circular fans sit above the cooling towers at the Lomas Chilled Water Plant. Water vapor leaves the towers caused by the system rejecting heat that is absorbed from campus.

In the early 2000’s, PPD Utilities engineers began looking at how their boilers operated with regard to water usage. PPD Utilities operates high pressure boilers that produce steam for heating campus buildings. To generate steam, many gallons of water are used in the boilers. The steam that is generated from the boilers are sent to campus where it is later condensed and returned to the Ford Utilities Center as hot water, or more commonly known as “condensate.” When a boiler is blown-down, the water and boiler chemicals are sent down the drain accounting for a 30 percent water loss from both the returning campus condensate and this blow-down process.

In 2007, PPD Utilities began looking at ways to save water and chemicals used in the steam process. When steam leaves the boiler, residual hardness and metals are suspended in the water left behind in the boiler. As more and more of the water is boiled off, the suspended impurities continue to be left behind, increasing the concentration in the boiler water. This water must be drained to avoid a scale build-up inside the boiler tubes, which would reduce the heating efficiency of the boiler.

In 2008, Utilities purchased a reverse osmosis (RO) system to replace the water softener used for the condensate makeup.

“Before the reverse osmosis was installed, water was recycled through the boilers about 12 times, but now it can be used up to 50 cycles, saving a significant amount of water,” said Ray Dimas, supervisor for Water Systems at PPD Utilities.

With this change, there was an immediate monthly reduction of makeup water by 13.5 percent or an average of 3.5 million gallons per year and a decrease in chemical costs by $6,000 per year. As an additional benefit, it was discovered that the RO supplied water reduced the carbonic acid in the condensate returning to the plant thus reducing the corrosion factor in the underground iron piping. This change is expected to increase the life expectancy of the condensate system piping for many years. 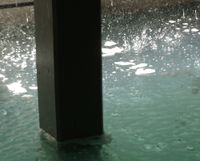 Utilities purchased a reverse osmosis (RO) system to replace the water softener used for the condensate makeup. UNM PPD can recycle water through the system up to 50 times.

Much has been accomplished to reduce UNM’s water usage: low-flow toilets and urinals have been installed throughout campus, and to date, a total of 40,000 square feet of turf has been removed for more sustainable landscape. Many electricity saving efforts assist in reducing water usage when buildings are shut down when they are not in use (weekend/holiday shut downs, Thanksgiving and Winter Setback Programs).

Last year, The National Climate Assessment was released. It discusses droughts in the southwest as being the major culprit in contributing to decline of our water resources.

“Climate changes pose challenges for an already parched region that is expected to get hotter and, in its southern half, significantly drier.  Severe and sustained drought will stress water sources, already over-utilized in many areas, forcing increasing competition among farmers, energy producers, urban dwellers, and plant and animal life for the region’s most precious resource.”

Overall, UNM has been successful in reducing the amount of water used on campus consistently since the early ‘90s.  In 1993, UNM pumped approximately 397 million gallons compared to 2013 when approximately 296 million gallons were pumped.  Over that 20 year span, UNM consistently saved millions of gallons of water per year due to the diligence of PPD and their stewardship to protect New Mexico’s environment through proper stewardship of the Southwest’s most precious resource: water.