Welcome to Albuquerque, and UNM

LoboScape, an installation featuring the latest visual arts technology, welcomes travelers as they exit the revolving doors leading from the terminals at the Albuquerque International Sunport to discover the University of New Mexico.

“On behalf of UNM, we are proud to be a part of your destination,” said President Robert G. Frank, “whether you are a first time visitor to the Land of Enchantment or returning home.”

Traditional advertising doesn’t allow for a meaningful expression about UNM that was necessary in a venue as distinctive as the Sunport.

UNM Chief Marketing and Communications Officer Cinnamon Blair said, “With the Sunport as a major entry into the city and the state, we need to create an ad that fits their aesthetic with a ‘you have arrived’ message,” she said.

“We do not want to just advertise, but create an experience. LoboScape represents and promotes UNM and the programs that created it.”

Blair and Marketing Director Argy Maniatis turned to the School of Architecture and Planning (SA+P) and the College of Fine Arts (CFA) because “they are in the design business.”

The Fabrications Lab in the SA+P and the Art, Research, Technology and Science Laboratory – ARTS Lab – in CFA collaborated on LoboScape, making it “singular in the world.”

“On behalf of UNM, we are proud to be a part of your destination. Whether you are a first time visitor to the Land of Enchantment or returning home.”  – UNM President Robert G. Frank

Matt Gines, who runs the “Fab Lab,” said that Blair and Maniatis both approached him over a year ago to design an airport display to showcase key UNM features.

“We got together a team of undergraduate and graduate students. We agreed that traditional signage is too static and must be changed out often. We wanted to create something that people would pay attention to,” he said.

Gines and the students determined that projection that highlights UNM achievements and events would be interesting. “ARTS Lab worked on projection for the multi-faceted and triangulated surfaces we created. We did all the fabrications,” he said.

Assembling a section of the LoboScape frame.

They pondered the use of a vacuum-formed shell system that is clean, light and easy to project onto, which could also withstand the impact from people in the airport. The material they settled on is polystyrene.

“I worked a lot with two students – Nick Nuccio and Taylor Horger because they have lots of fabrication experience,” he added.

Horger was the graduate assistant on the project. He said, “My role was to help design and develop different iterations for the airport project. Once a final design was chosen, Nick Nuccio and I were responsible to transform idea that only existed in the digital realm into something physical. I used our CNC router – or a robotic drill – to cut out pieces made from fiberboard, that were then assembled like giant puzzle pieces to create large molds.”

He said that they created seven different types of molds, which, when put together, formed the shape of the design. The molds were then sent off to California to be vacuum formed, which involves heating sheets of plastic and forming them around molds to make a copy of the “skin.”

“Once those were sent back to us, Nick and I then focused on constructing the frame out of aluminum, which would then support our installation. Once everything was finished we delivered to the airport for installation,” Horger said.

Both Horger and Nuccio said that the project taught them about working with clients, as well as deadlines and budgets.

“When you are in school, normally you don’t have clients or budgets which usually give you unlimited constraint on your design intentions,” Horger said. “This project quickly taught me that I could not go to crazy with the design and that I could not use certain materials due to the time and money constraints.

“It was a process of learning how to adapt to the situation, which provides myself a greater understanding of how things may work in an actual job instead of a school setting.” 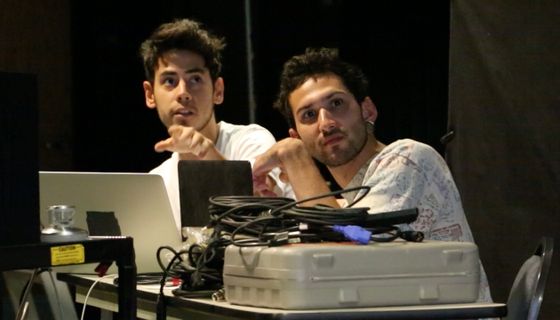 Tim Castillo's students in ARTS Lab put finishing touches on one of the video segments for LoboScape.

Being a part of LoboScape allowed Nuccio to “push boundaries of my skill level. It also gave me an opportunity to see actual design become a reality, which is important for a designer.”

Tim Castillo is an associate professor of architecture and director of ARTS Lab. The software on which they used to create the audiovisual show is called “Millumin.” “We looked at four layers of general content – campus life, research, athletics and what’s going on at UNM,” he said.

The general story is being developed with video shot by UCAM’s videographer, Ryan Montano.

“It will run in a three-and-one-half minute loop that is visually compelling. We recognize that people will walk by it in about 20 seconds, but the geometric shape of the display, coupled with compelling video, should make people want to stop and give it a longer look,” Castillo said.

Because the faceting, images and content “can fluctuate between the articulating geometry,” Castillo said, the three-dimensional space on which images or video are projected offer a distinctive effect.

Thinking about LoboScape’s impact, Castillo said, “I want to visually stimulate and inspire people as they come through the airport gate. I want them to think about the opportunities that exist at UNM – and to do so quickly.”

The design and software allow for another dimension – interactivity. “We are using Connect, a Microsoft camera and laser program to allow people to interact with the screen,” Castillo said, adding that this feature will not be included in the original installation, but added later.

Checking out and testing the projection capabilities of LoboScape.

Castillo’s colleague at ARTS Lab, Senior Program Manager David Beining, demonstrated how Connect projects objects on a screen and when someone stands between the screen and camera, he or she can move around, moving the objects on the screen.

“We are looking at using UNM logos in this feature,” Beining said. He added that the initiative has been a “great interdisciplinary project that includes videography, fabrication and marketers – all of whom speak the common language of design.”

The project provided learning opportunities for students and faculty. “This is the first time we’ve done anything like this. Creating the timeline for the project was difficult, but once we understood the geometry created in the Fab Lab, we knew we needed the most compelling video content that would work well with it,” Castillo said.

Blair added, “LoboScape showcases the holistic experience of coming to UNM. Once here, you don’t just come to a campus. You come to a state and to a community – that’s what makes the experience valuable. The UNM adventure is not just academic. It is an open door to the many opportunities to explore, to grow, to be a part of a distinctive place that takes ahold of one’s heart and head. We want to reflect that through LoboScape.”