“He assessed the state of the equipment in the facility as dated, unsafe and some of it, non-functional,” Wilson said. Student Wilson asked Professor Wilson, “What would it take to create a safe, productive environment for sculptors?” Robert Wilson worked with Kathleen Shields at the Hammersley Foundation and was successful in attracting a $50,000 grant for equipment.

“It was a generous and kind act. He set his mind on the future knowing that the gift would impact the quality of work for generations,” said Assistant Professor Randall Wilson. “The contribution will help students dream.”

Wilson has already purchased around $40,000 of equipment for the sculpture studio. “This allows the students to create works that reflect who they are, where they come from in an efficient way.” The condition of the studio environment speaks to the commitment the College of Fine Arts has to its students. “We have to demonstrate that we are providing the best we can with our limited resources,” he said.

“We have Route 66, the Camino Real, trains, the Space Port and balloons. Travel and dreaming go together – they are connected physically and metaphorically." – Assistant Professor Randall Wilson

Changing culture and environment
“Through this grant, we have created change in Art and Art History,” Wilson said. “Our eyes are open. We see what needs to be done and are taking action accordingly. Functionality is a pedagogical shift from the past.”

His efforts toward excellence in education have been acknowledged – he has won multiple awards for his teaching excellence. In 2013, the publication Design Intelligence listed Wilson in the top 30 most admired professors in the United States. “My artwork has been featured around the world on CNN and featured in the Wall Street Journal," he said. 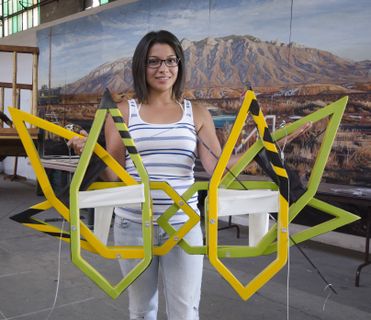 Lucia Flores prepares to hang her plane at the Wheels Museum. Her design was influenced by snowflakes.

“At UNM, there is huge potential in people, but work has to be done to elevate the standard of quality, and then to seek venues for exhibitions," he said. His recent spring semester course, “Cycles of Expression,” created an exhibition where students explored the aesthetic of bicycle transportation.

“Cycles” was also exhibited at 516 Arts, in downtown Albuquerque, featured the largest reception ever held at the gallery with nearly 1,500 people in attendance. The exhibition has now found a forever home at the Wheels Museum. Leba Freed, the director of the Museum of Wheels, welcomed the work to be exhibited as a permanent part of the collection.

“Cycles” is part of Wilson’s larger transportation project, which includes “Cars” and “Wings.” All include work of UNM students and will be part of the permanent exhibit at the Wheels Museum. Wilson and Wheels Museum have been going around for a while.

“When I was 15-years-old, I worked at the largest museum of its kind – the Forney Museum of Transportation. It was family owned by a generous millionaire who collected cars, planes, trains and automobiles,” Wilson said.

Why UNM?
Wilson has deep roots in New Mexico, which is why he left a much more lucrative position in California. “My great-great-grandfather was Milton Gentry. He drove Conestoga wagons from St. Louis to Santa Fe. He married Estefanita Hurtado, from one of the original Santa Fe families," he said. Hurtado’s ancestor was Captain Serrano, who brought settlers up from Mexico City to Santa Fe. 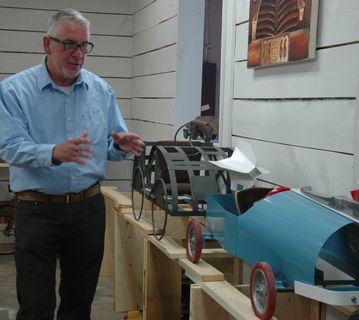 Wilson describes his fascination with transportation and the designs of automobiles.

Transportation is critical to the New Mexico story. “We have Route 66, the Camino Real, trains, the Space Port and balloons. Travel and dreaming go together – they are connected physically and metaphorically."

Art: Form and Function
Wilson believes that the art world can learn from Apple Computers, “In Cupertino, the conversation is about the value of creativity. It’s not enough to have designers who are able to work on computing, they need to understand the physical world as well. The connection to sculpture is profound in that way. I see us developing creative athletes at UNM – creative people who have the ability to make real their visions.”

Wilson said that functional art increases the potential of making a living as an artist. “Art galleries are like thrift stores – they get their products for free. Artists produce on speculative financial terms. When we incorporate functionality, the number of buyers increases dramatically. Our students need to understand business – price, production, distribution and marketing.”

With the newly renovated sculpture labs, Wilson believes that with this generous gift, his students can excel in the world of art. “Education is an investment in people. It is a privilege and a responsibility to be an instructor, I am thankful for the opportunities presented to me.”