Wireless internet picks up speed at the SUB

Recent renovations to the wireless internet network at the University of New Mexico's Student Union Building (SUB) are already showing large improvements in the network’s strength and reliability. Slated as a model for future wireless internet renovations across campus, the recently-completed project added 121 new wireless access points to the SUB, six times the previous number of 20 access points, and tripled internet speeds in and around the SUB.

The project, which took place over the summer, cost approximately $250,000 and was funded by student fees. The project was spearheaded by UNM Student Affairs, the Associated Students of UNM (ASUNM), the Graduate and Professional Student Associate (GPSA) and Information Technologies (IT).

Led by Walter Miller, associate vice president of Student Affairs, Gil Gonzales, IT chief information officer, Rachel Williams, ASUNM president and Texanna Martin, GPSA president, project leaders envisioned an overhaul of the wireless connectivity across campus. Not only has the speed increased with the installation of more access points, but 14 additional, new ‘switches’ were added to handle the increased bandwidth as well as dual connectors at each access point that help remedy faults and handle extreme loads for when the network is very busy.

Williams and Martin, as leaders of the student body, helped spearhead the project because a lot of complaints about the campus internet’s reliability and speed have been made by students. As the project expands across campus in the coming years, the idea is to cut such complaints and provide speeds that are akin to physically plugging into the network campus wide (i.e. very fast).

Students are already seeing the changes in the SUB, Nicolas Meyer, student and employee in the SUB basement, said, “We’re definitely noticing improvements in the reliability of the network. In years past the internet would cut in and out which was extremely annoying, but thanks to the renovations those issues have gone away.”

Gonzales, whose department provides all the data on wireless internet to each building, is pleased to have been able to get this project done despite some of the red tape involved.

“The project was green lit through necessary collaboration and IT’s recommendation to the Student Fee Review Board (SFRB), a subset of ASUNM, to allocate funds for it,” Gonzales said. “The department made clear that, although they can provide data and suggestions, at the end of the day it’s up to the students.”

All of the changes were made to keep up with the societal trends of the continually increasing internet use by students, faculty and staff. Most people in the college community own at least two and sometimes in excess of five internet connected devices. One of the main goals of the renovation was to enhance the network’s ability to not only handle current devices on the network, but also be ready for new devices to be added. The IT department says they are seeing multiple devices added to the network every hour. 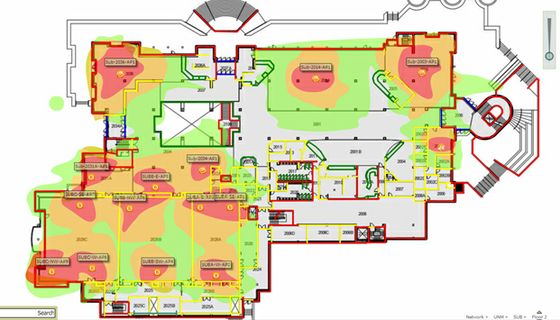 Going further, as the SFRB decides their budgets in coming years, Gonzales hopes they will continue to recognize the importance of improving the wireless internet on campus. Challenged by President Robert Frank to create a next generation wireless system, Gonzales sees one of the biggest changes that should be made is rethinking the building-by-building model that is currently employed. As of now, each building controls its own wireless internet budget, and wireless is geared for in the building use.

Gonzales would like to see that model changed into a zoning or district model which would take the responsibility out of the building heads hands. Mentioning the Duck Pond as an example, he said, “We want to provide strong internet across campus where students want to do their work. That isn’t always in a building.”

Overall the project has been successful thus far in terms of accomplishing what the group set out to do.

“I think when you look at the mapping of the network, we’ve taken a major leap,” Miller said. “We’ve already heard feedback with people exclaiming, ‘Wow, what’d you do?’ I believe we’ve hit the target in a positive and major way.”