Katie Witkiewitz, an associate professor of Psychology and scientist at the Center on Alcoholism, Substance Abuse and Addictions (CASAA) at the University of New Mexico, was recently awarded a Presidential Citation from the American Psychology Association (APA) for her early career accomplishments, dedication to advancing the science and treatment of addictive behaviors, and service to the field.

Witkiewitz was one of two to receive both the early career award and also in the area of substance abuse, and one of 60 awardees overall. The award is given to scientists at varying levels of their career. She was nominated for the award by leaders in the field of addiction and was selected by a peer committee who reviewed the nominations.

Witkiewitz works with patients who have addictions and in many cases, multiple difficulties including poly-substance abuse and mental health problems.

“The science I conduct is in many cases more difficult because of the struggles encountered by the population I work with, but it can also be very rewarding,” Witkiewitz said. “To receive recognition for this work at such an early stage of my career validates both my work in the area of addiction, and also from the APA is really meaningful because addiction  is often considered a medical disease, but psychological/behavioral treatments are often very effective in helping people struggling with addictive behaviors.” 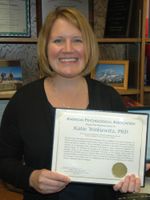 Witkiewitz has emerged as an enthusiastic leader, mentor and colleague, with exemplary service to the APA as the program chair/co-chair for Divisions 12 (Society of Clinical Psychology), 28 (Psychopharmacology and Substance Abuse) and 50 (Society of Addiction Psychology), and as associate editor for the journal Psychology of Addictive Behavior.

Like her mentor, Alan Marlatt, who was a professor of Psychology at the University of Washington and director of the Addictive Behaviors Research Center, Witkiewitz is a trailblazer in the study of addiction. In 2004, she proposed a dynamical systems model of relapse which has since been supported by empirical studies and lauded by clinicians. She has challenged conventions in the analysis of alcohol treatment outcomes by incorporating newer quantitative methodology to better understand mechanisms of behavior change.

Witkiewitz is also an inspirational role model for her students and an excellent research collaborator among her colleagues. Her research focus areas include mindfulness-based interventions for substance abuse disorders where she has conducted extensive research involving treatment to prevent addictive behavior relapse, high reincarceration rates among substance-involved criminal offenders, and unresolved issues in the application of mindfulness-based interventions for substance use disorders.

Most recently, she is a Co-Investigator with UNM Associate Professor Kevin Vowles involving a $654,000 grant from the National Institutes of Health on an integrated acceptance and mindfulness-based treatment for veterans with chronic pain and opiate misuse.

Witkiewitz has been doing mindfulness research with substance abusing and offender populations for over 10 years. Witkiewitz and her colleagues have recently published results from two randomized clinical trials that have found mindfulness-based interventions to be more effective than the existing gold-standard behavioral treatments for addiction.

In 2013, Witkiewitz attended a conference of the Mind & Life Institute in Dharamsala, India with the Dalai Lama. Research collaborator and colleague Sarah Bowen presented their research on mindfulness-based interventions for addiction to the Dalai Lama.