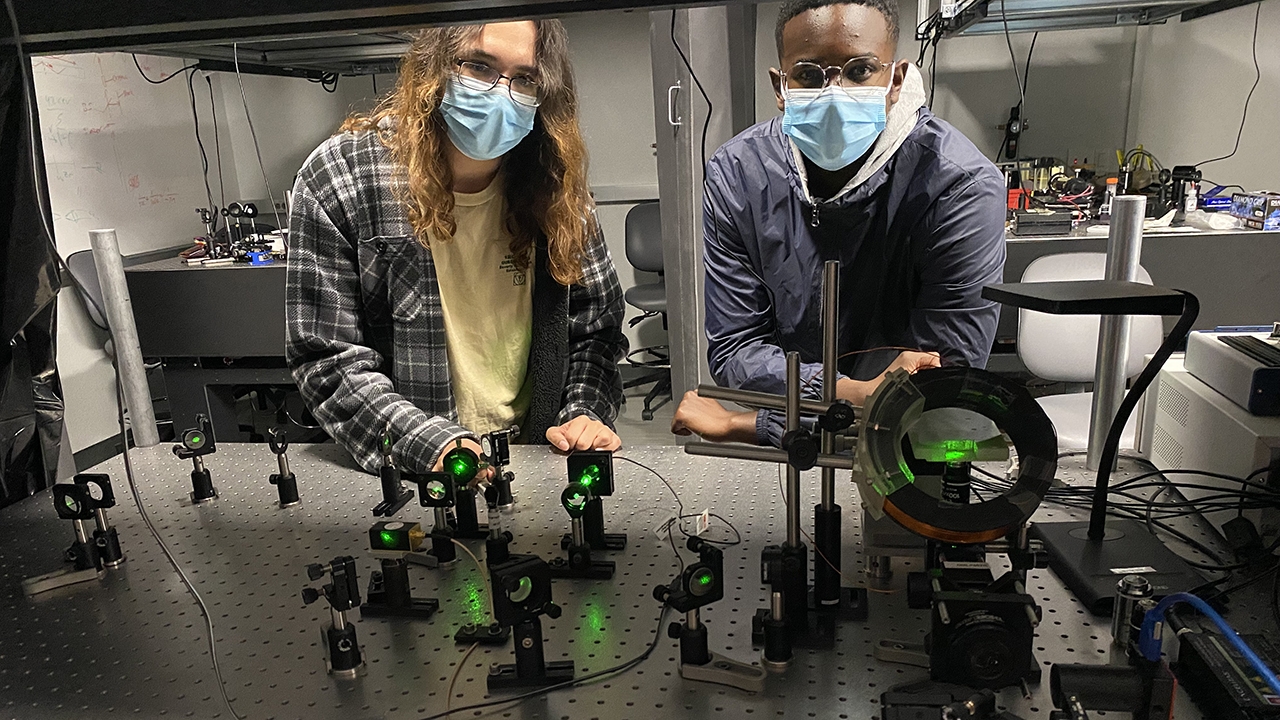 research partners Andrew Gilbert and Roberts Ituah worked on quantum sensing by analyzing the fluorescent and magnetic qualities of Nitrogen-Vacancy centers in diamond. 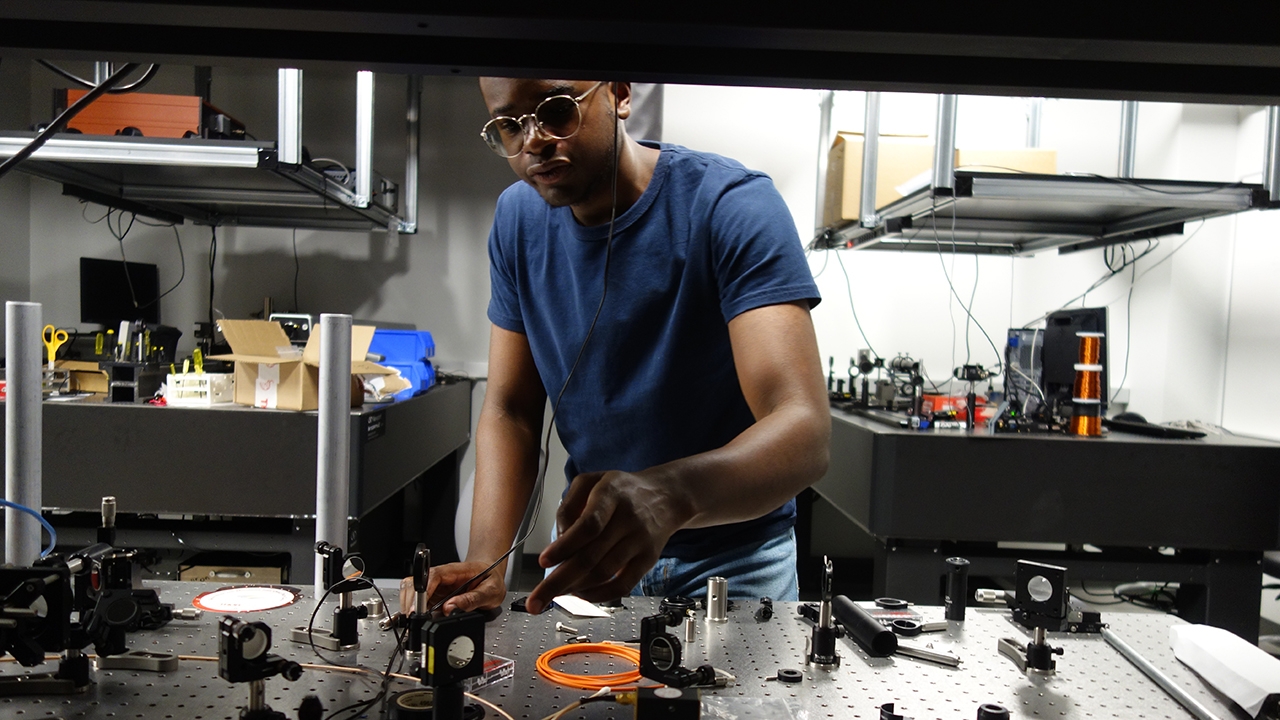 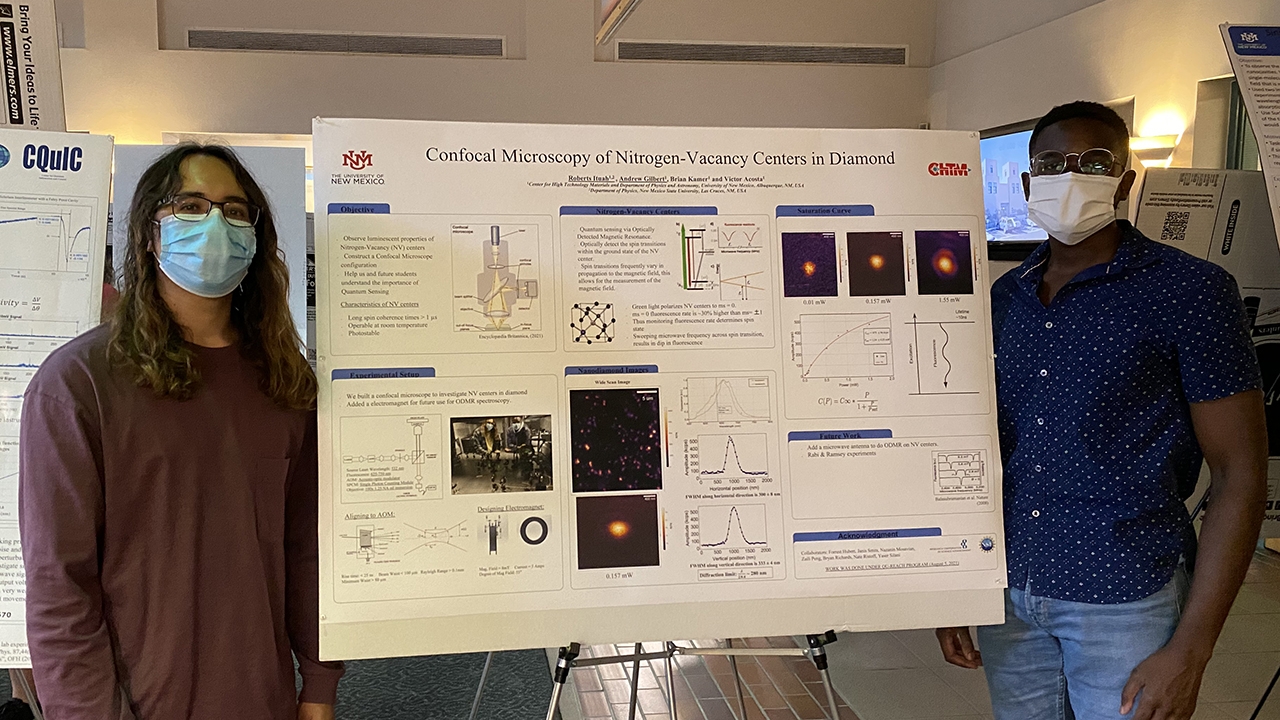 Andrew Gilbert and Roberts Ituah display their professional-style poster, which was a requirement as part of the QU-Reach Program. Each group presented their poster at the end of the 10-week session. 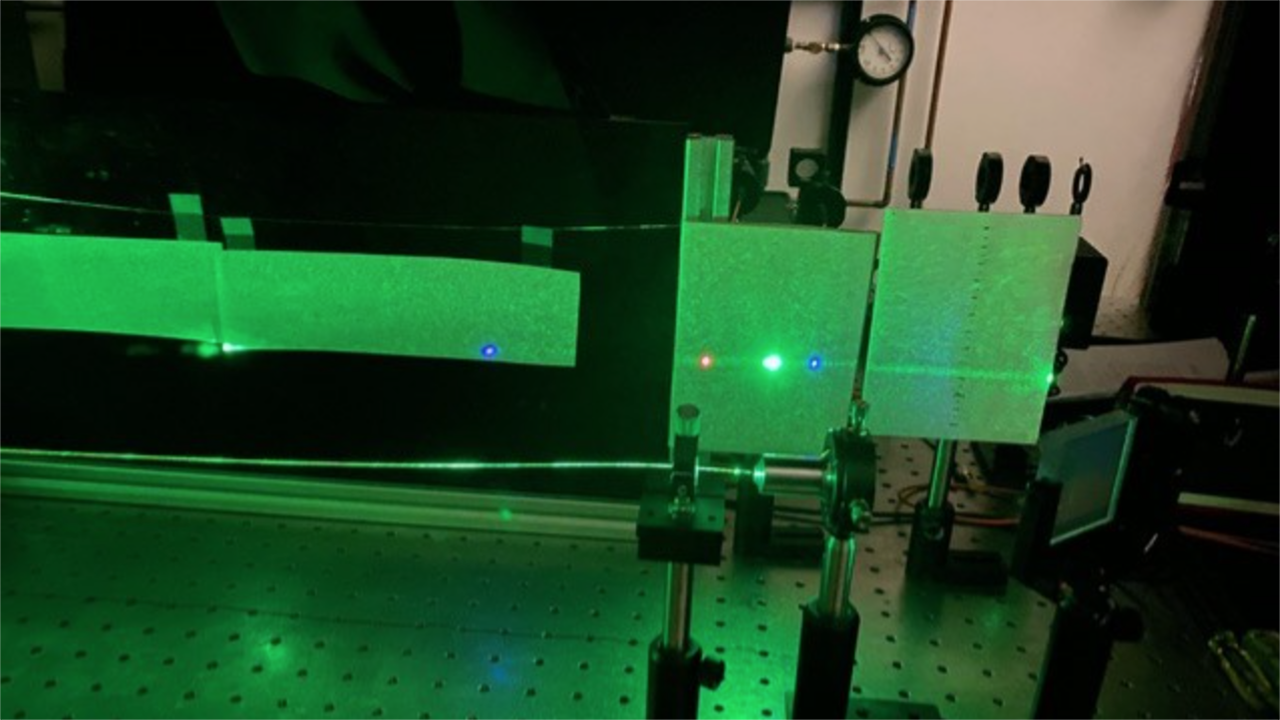 student researchers including Sara Nguyen created four-wave mixing through an optical fiber. Four-wave mixing is when two green photons annihilate each other to create a blue and red photo as seen in the image. 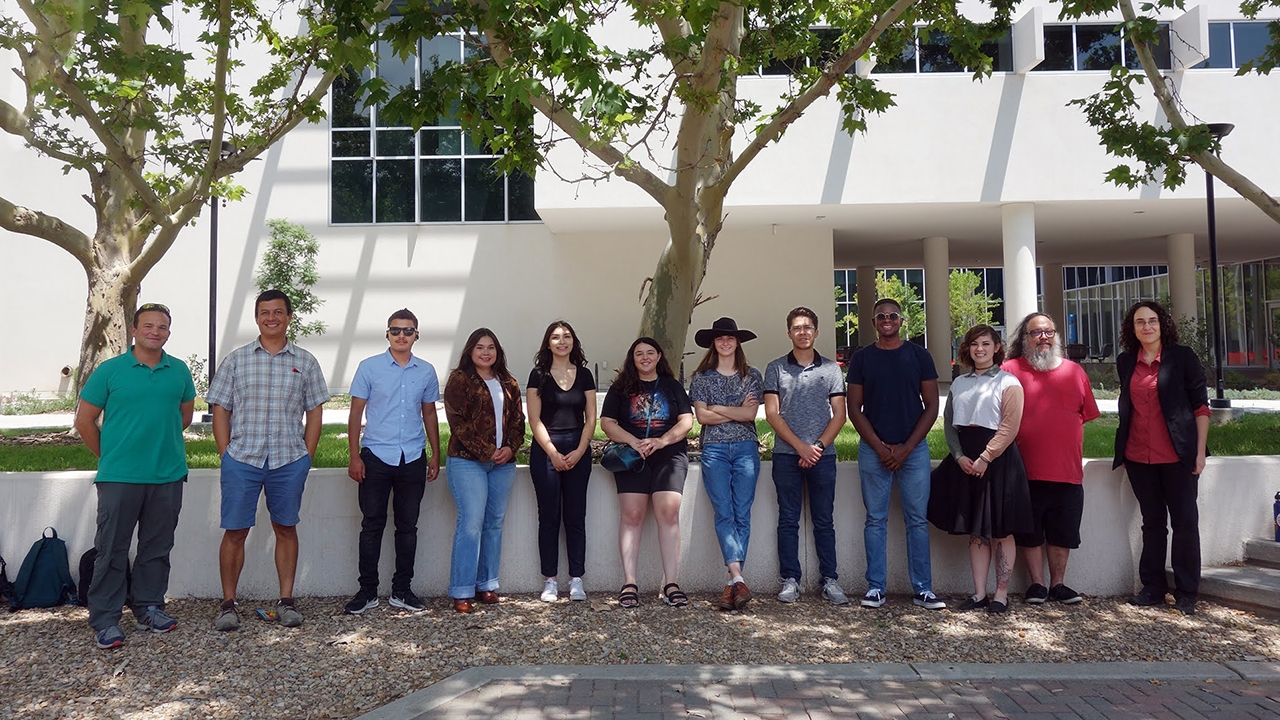 Quantum Technologies hold the promise to revolutionize future technologies in computing, communication, and sensing and deepening our understanding of the universe. They harness the unique features of quantum mechanical systems for devices such as laser systems, transistors and semiconductor devices and other devices such as MRI imagers.

The program is designed to foster and leverage the longstanding and growing research infrastructure in quantum technologies at UNM, particularly at dedicated research centers such as the Center for High Tech Materials (CHTM) and CQuIC. The program provided students statewide in New Mexico’s four- and two-year higher education institutions with an early hands-on undergraduate research experience in Quantum Technologies.

“Our goal is for QU-REACH to serve as the launching point for New Mexico students to pursue further Quantum Technologies research and related careers in academia, industry, and national labs,” said Department of Physics and CHTM Associate Professor Victor Acosta. “We designed the program so that it could serve the State of New Mexico and the students within the State. We have relative strengths at UNM in the field of quantum technology, and we wanted to help introduce students throughout New Mexico to the field and give the seeds that can grow into future opportunities should they choose to pursue a career in the field.”

Projects were available in a broad range of disciplines including physics, chemistry, electrical engineering, mechanical engineering) related to the three cornerstones of Quantum Technologies which include: Quantum Sensing, Quantum Communications, and Quantum Computing.

"We have relative strengths at UNM in the field of quantum technology, and we wanted to help introduce students throughout New Mexico to the field and give the seeds that can grow into future opportunities should they choose to pursue a career in the field." – Associate Professor Victor Acosta

One of the seven projects available for students to work on this summer was Acosta’s own Quantum sensing with Nitrogen-Vacancy centers in diamond.

“The program was great; it focused mainly on Quantum Technologies and their importance to research and industry,” said Ituah. “It also ensured that participants received hands-on experience with top-of-line science-grade equipment to help visualize and understand the project. Quantum Technologies is split into three main categories: Quantum Computing, Quantum Sensing, and Quantum Communications. My research project focused on Quantum Sensing. We explored this by analyzing the fluorescent and magnetic qualities of Nitrogen-Vacancy centers in diamond.”

Ituah plans on applying to grad school at UNM to pursue a master's in nuclear engineering with a concentration in medical physics. “For me, this research served as valuable experience in topics surrounding optics and quantum mechanics that will benefit me greatly,” he said. “I would like to thank all the faculty and staff for giving me this opportunity to experience physics in a more applicable setting.”

Sara Nguyen, a sophomore majoring in nuclear engineering at UNM, was a student in Mafi's project involving the characterization of light using second-order correlation function. Together they worked on coincidence counting of photons and how this research proves the existence of photons and also allows them to observe the quantum nature of light. Throughout the 10 weeks of the program, they learned how to optimize their experiments to get the best results and while learning how to analyze the data they gathered.

"I loved the program, I thought it was a very valuable experience and it allowed me to experience what it’s like to work in a lab and to perform experiments," said Nguyen. "I think these research programs are a great opportunity for students to see if the STEM world is truly where they want to be. This was my first step into the scientific world and no doubt, it can be complicated and difficult but the experience was well worth it."
QU-REACH is supported by a combination of grants from the Research Corporation for Science Advancement, National Science Foundation (both individual investigator grants) and the Q-SEnSE Quantum Leap Challenge Institute), and others. Students from historically excluded groups in STEM (including women, Hispanic, American Indian, and Black students) and students who are the first generation in their families to attend college are strongly encouraged to apply.

"Students attended a near-weekly seminar series where they had a chance to get to know some of the leading experts in the field who are faculty at UNM that were not necessarily supervising QU-REACH students in their research directly,” said Acosta. “We have a number of excellent faculty in the field who are really good pedagogically, delivering lectures to diverse audiences. Initially, we started out with basic topics, like introduction to quantum technology and qubits, and then extended out to different areas of active research.

“We concluded the program with a poster session, which was widely attended, where students printed out a professional conference-style poster and presented their research to the faculty, students, postdocs and other researchers in CHTM, Electrical and Computer Engineering, Chemistry and Chemical Biology and Physics & Astronomy.”

Quantum technologies are a rapidly expanding field and the basis of numerous worldwide efforts to accelerate science and technology, including the National Quantum Initiative, which was signed into law in 2018. The law gives the U.S. a plan for advancing quantum technology, in particular, quantum computing. The NQI provides an umbrella for several government agencies to develop and operate programs related to improving the climate for quantum science and technology in the U.S.

Last year, The University of New Mexico benefitted from a pair of grants that helped the University establish itself as a quantum technologies hub. UNM’s Center for Quantum Information and Control (CQuIC) was part of a $115 million, five-year Department of Energy grant to the Quantum Systems Accelerator (QSA), a new research center led by Lawrence Berkeley National Laboratory (Berkeley Lab). UNM was also part of a $25 million National Science Foundation (NSF) award to launch a new quantum information science and engineering research center led by the University of Colorado-Boulder.

Additionally, CQuIC was recently awarded a $3 million grant from the NSF to expand New Mexico’s standing as a QIS national hub. CQuIC will be spearheading an effort that will not only lead to new advances in QIS but new educational opportunities for the next generation of scientists as well.

Led by Regents Professor Ivan Deutsch, CQuIC is a highly interdisciplinary research Center dedicated to the advancement of education and research within QIS.

“UNM continues to grow as a leader in QIS, building on the pioneering efforts established by CQuIC and its predecessors over 25 years,” said Deutsch. “The broad range of cutting-edge research and education initiatives, like QU-REACH, will extend opportunities to diverse communities across New Mexico, as we establish ourselves as a national hub for the quantum technologies of the future.”

For more information and to learn more about the program, visit QU-REACH.