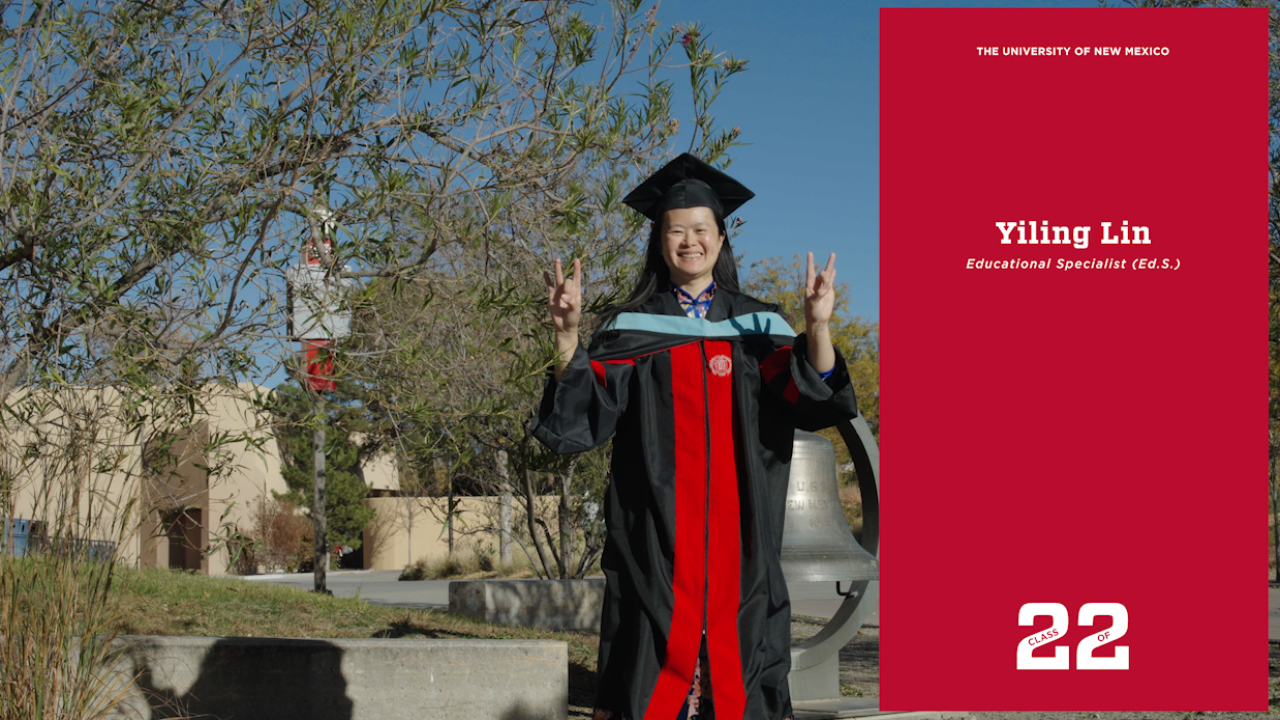 She speaks Taiwanse, Mandarin Chinese, English, and is learning Japanese and Navajo. It’s no secret Yiling Lin is a master of all trades.

This fall, she is earning her third degree in 12 years from the University of New Mexico. The Educational Specialist Licensure in Educational Leadership, comes out of the College of Education and Human Sciences (COEHS).

Lin has made it her mission to serve New Mexican students with the most need. Her passion and dedication to teaching has led her to fall in love with special education, as well as tribal communities.

“I really want to help Native American students and keep thinking what I can do better,” she said.

Her son, Cian Liu, was the key for all of this, over a decade ago in Taiwan. Although she did not know it at the time, Cian had autism.

“At that time he had been diagnosed with Asperger's syndrome. I had no idea what that meant. The teacher didn't either because he has a normal IQ, and his academic performance was awesome,” Lin said.

When Cian began to get bullied not just by his classmates, but his teacher for who he was, Lin sought answers.

“There was a time that I felt like, what can I do to help my son?” she said.

A friend and Lobo at the time recommended degrees at UNM, which would allow her to learn more about autism and special education as a whole.

So, she, her husband Yung-Hsin Liu, Cian, and her daughter Jhen Liu, packed their bags and left Taiwan for the Land of Enchantment.

“I was really amazed by the campus and also UNM as a whole. I was so grateful that I was admitted to the special education program,” Lin said.

Since embarking on UNM’s campus, Lin has earned her master’s and doctorate degrees in special education. Her husband also earned his master’s, and her daughter just graduated with her bachelor’s. She believes her son will make his way back to campus, making the family of Lobos complete!

“I know one day he will still come back to  UNM,” Lin said. “I think my whole family really loves New Mexico and UNM.”

Throughout each of these programs, Lin said she found a true group of friends.

“This is truly the first time I feel like I’m part of a family. Me and three other Native American ladies, we formed a clan. We love each other, and we care for each other. They truly made me feel I am a part of the Native American community,” she said.

Not only them, but she attributes her success to a number of professors for their patience and kindness. That long list includes professors Susan Copeland, Ruth Luckasson, Cathy Qi, Russ Romans, Patrick Lopez, William Holmes and Shawn Secatero.

Lin spent the past seven years, throughout the pandemic as well, teaching at Gallup-McKinley schools. Serving Native students, she believed, was her calling.

“There is a lot of disproportion in the need for special education, especially with Native American students being diagnosed as students with specific learning disabilities,” Lin said. “It keeps me wondering, is it truly their disability or is it actually because of the low quality of their education?”

Lin’s current journey has led her through the one-of-a-kind POLLEN program in the COEHS. POLLEN, led by Secatero, develops leadership and Indigenous knowledge so that teachers can earn a separate degree and experience to become a principal in Native-serving schools.

“I kept thinking as a teacher, it seems like I can just only teach a group of students every year. Then I started thinking maybe I should become a principal,” she said.

Lin joined cohort five of the POLLEN program, and has gone above and beyond, according to Secatero.

“I'm glad that I'm a member of POLLEN. This program is truly an amazing program that helped me to think critically and know how to become a more socially responsive school leader,” Lin said.

It’s no surprise Lin wants to fill the dire need for principals in Indigenous communities, serving Native students. In addition to solving inequalities within tribal schools, Lin also has set her sights on becoming a principal to help other teachers. That’s something she has already begun to experience, with her new leadership skills.

“I like to see the teachers when they see their students making gains, and they also feel proud of themselves. That’s the ‘aha’ moment. The kids also feel confident because they now know, yeah, this thing is easy,” she said.

Lin’s bright, unwavering smile and contagious laugh are things she hopes to instill in her career, as well as potentially her own charter school one day.

“That's my goal–just like really having a dream school to myself that all the families and students like to come to with a big smile. That's my dream,” she said.

While she continues to learn and eye another doctorate degree, Lin’s dreams are far from over. UNM is just what she needs to reach them.

“I feel like I still have a lot to learn. I want to be humble, and learn as much as possible before I step in to become a principal,” Lin said. “I can still, you know, dream about my future and I can still try to chase it and also to fulfill it. Nothing is impossible on this campus.”

Her love for learning and hope is one that she has made her mission to spread far and wide, even starting with her current fourth-graders–anything is possible.