Michael Millman is joining The University of New Mexico Press as a senior acquisitions editor. Millman will work towards acquiring books in the subject areas of American, U.S. Western and military history; anthropology and archaeology; environmental studies; Latin American studies; and Native studies. 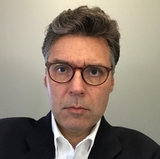 “Michael is a senior editor of exceptional ability, depth and experience, whose editorial acumen will aid UNM Press immeasurably as we build on our categories of strength and enter new scholarly and trade publishing areas,” said UNM Press Director Stephen Hull.

Millman brings an extensive resume with experience across publishing houses, from Viking Penguin in New York– where he oversaw publications for the Penguin Classics, the Penguin Nature Classics, the Viking Portable Library, and the Pelican Shakespeare series– to 10 years as a senior acquisitions editor in American history and literature, world history and biography at ABC-Clio/Greenwood.

Over the course of his career Millman has worked with many award-winning authors and acquired and edited an impressive array of books with notable acclaim, including The Fall of Berlin 1945 by Antony Beevor, Selected Non-Fictions by Jorge Luis Borges, edited by Eliot Weinberger, Salt: A World History by Mark Kurlansky, The Reformation: A History by Diarmaid MacCulloch, and the Viking Centennial edition of East of Eden by John Steinbeck.

“The Press has a long and distinguished history of publishing excellence,” Millman says, “and I am eager to contribute to such a prestigious list.”