This week, art imitates life on New Mexico in Focus. Correspondent Antonia Gonzales sits down with attorney and playwright Mary Kathryn Nagle. Santa Fe’s Lensic Performing Arts Center recently hosted a stage reading of her play, “Sovereignty.” The production is set in both the 1800s and in modern times and tells the story behind a landmark jurisdiction case won before the U.S. Supreme Court by the Cherokee Nation. Nagle explains how her career as an attorney affects her storytelling style. She also explores the continuing struggles in the theater world for accurate representations of Indigenous people and issues.

In this month’s installment of Our Land, correspondent Laura Paskus investigates the recent outbreak of blue-green algae blooms at some New Mexico lakes. Those blooms have caused some closures later this summer because of the health risks to people and pets. Experts help explain more about the risks from exposure to the blooms and what is being done to try and keep the problem from spreading.

Gene Grant and The Line opinion panel discuss President Trump’s plan to divert more than $100 million earmarked for New Mexico military projects to fund a border wall. The Line panelists also debate an idea to create a new permanent fund for early childhood education and go inside the state’s struggles to move from coal to renewable energy sources. 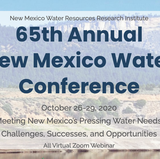