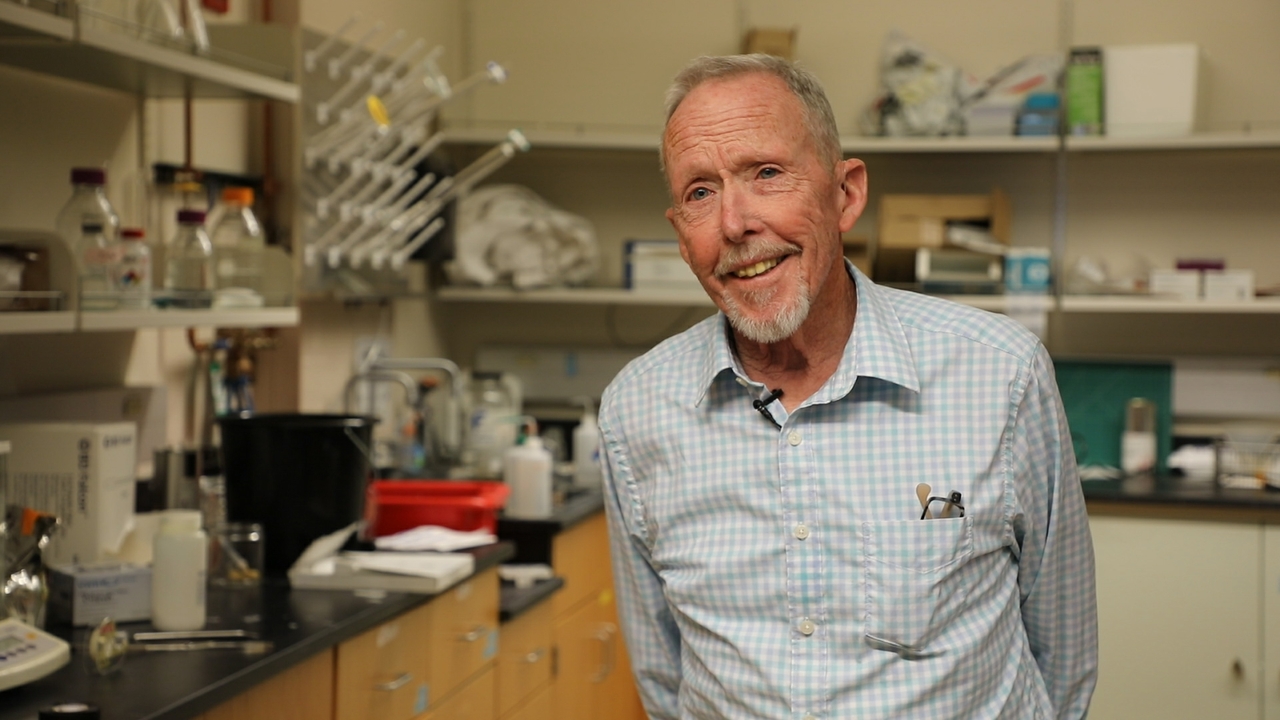 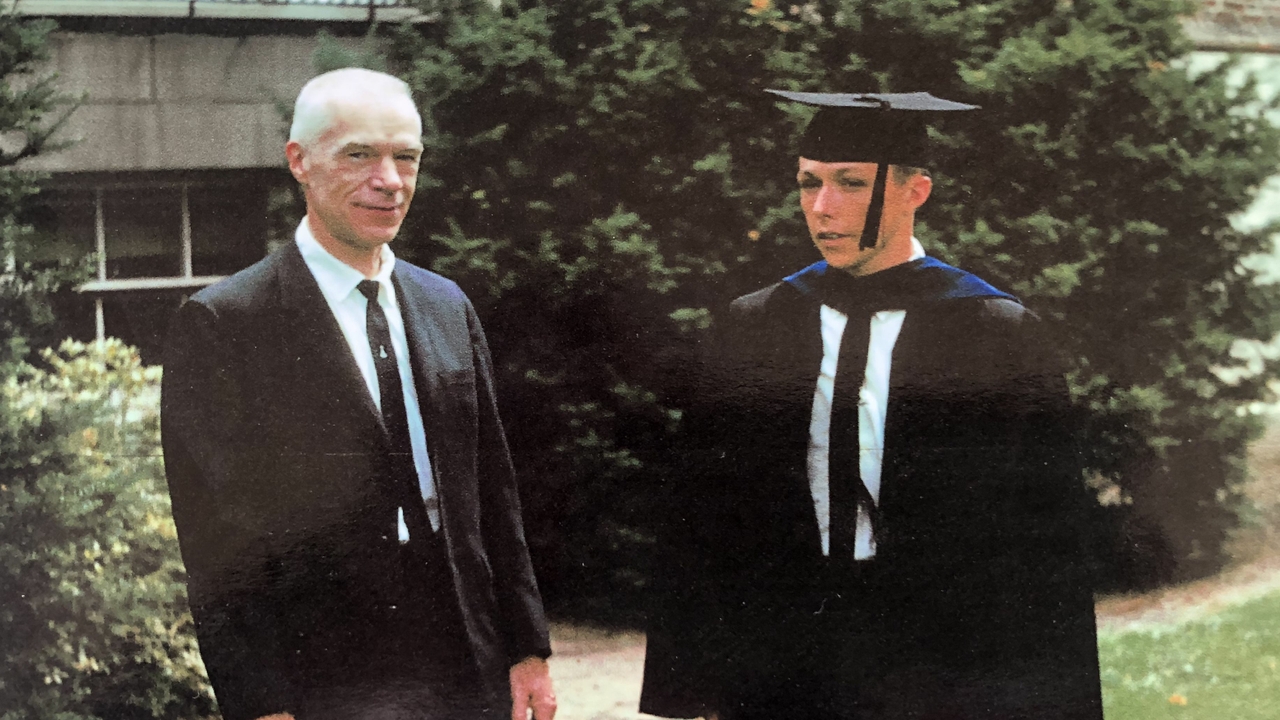 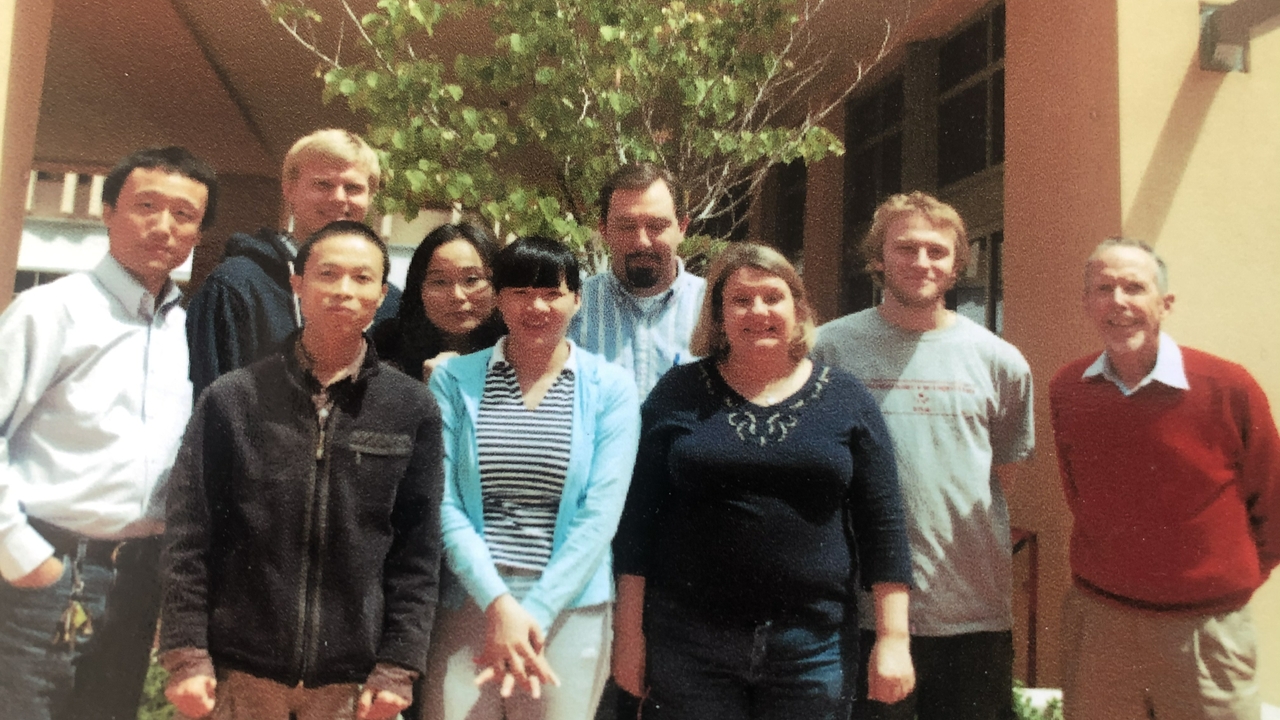 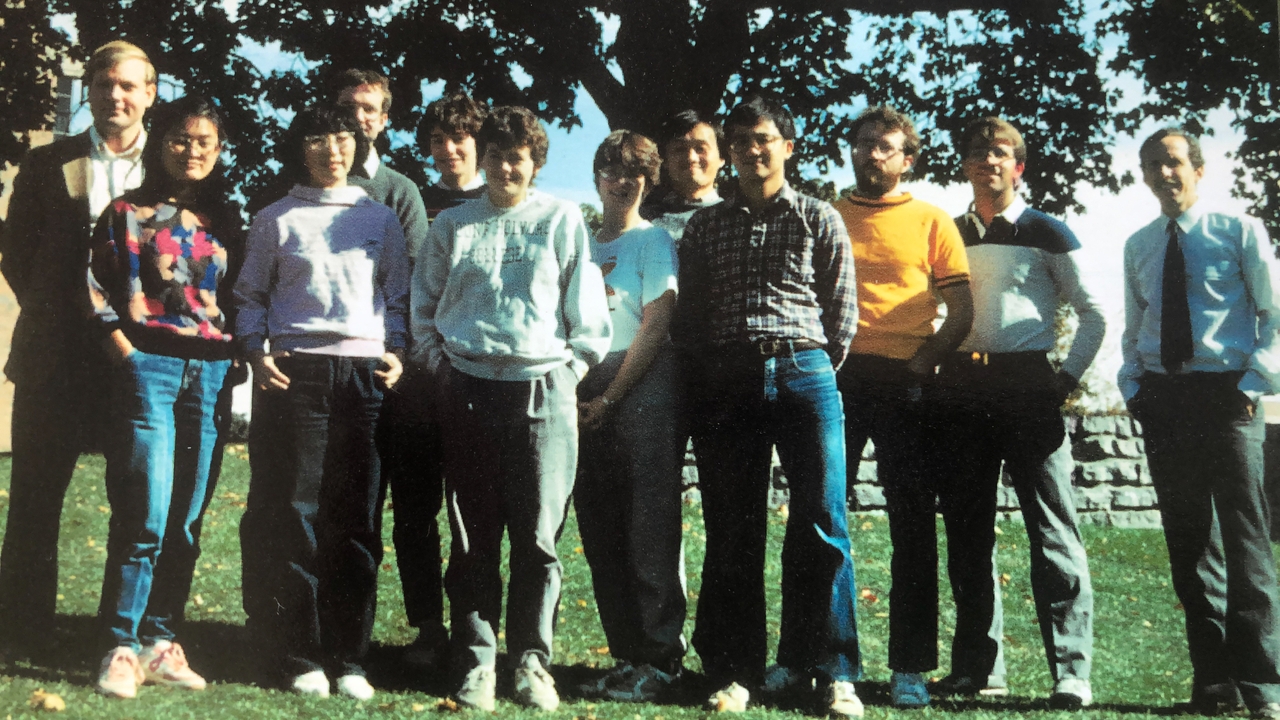 Whitten with a research group at University of Rochester, 1996

UNM Rainforest Innovations (formally STC.UNM) announced its 2020 Innovation Fellow – an individual whose work is not only driven by the pursuit of innovation and knowledge, but also by the objective of positively impacting our society.

David Whitten has more than 50 years of experience as a scientist and an academic. He joined The University of New Mexico in 2005 and has since excelled as an inventor, disclosing 33 technologies and receiving 17 issued patents. He was selected as a Distinguished Professor of Chemical and Biological Engineering in 2016 and is the Associate Director for the Center for Biomedical Engineering. He also serves as Associate Editor for ACS Applied Materials and Interfaces.

Whitten explores the mechanisms by which different compounds function and their potential application as antimicrobials.

When asked why he pursues this type of research, Whitten replied, “Too often I think scientists like to compartmentalize what they’re doing as one sort of thing or another. Like pure research or fundamental research or curiosity driven research – those mean you’re really just looking at for the fun of finding new knowledge. On the other hand, there are people who do this kind of work but are also working towards an application – and I find that more appealing. I really like the idea that something I’ve done can be useful.”

Whitten’s conjugated polyelectrolyte technology combats two of the largest threats to human health and wellbeing in the 21st century; antibiotic resistant bacteria and most recently the spread of infectious disease. The emergence of these significant problems has resulted in a considerable amount of clinical research on the study of different methods of infection control practices. One of the most significant interests has been on antimicrobial surfaces for medical facilities, medical devices and personal residences and household items. These antimicrobial surfaces would be used to reduce the transmission of disease and infection spread from one organism to another through eliminating microbes.

Most microbes can linger on surfaces for several hours and can infect numerous organisms within a short period of time. Scientific research has confirmed that microbes contribute to many infectious diseases, cancers and infections. Although standard disinfection protocols work well for microbes in suspension, they aren’t nearly as effective against microbes attached to surfaces, which account for the majority of bacteria in the world. This has led researchers to instead focus on a different method of disinfection using unique coatings which can trap, capture and kill pathogens.

Whitten and collaborators including Kirk Schanze of the University of Florida have created novel coatings using cationic conjugated polyelectrolytes (CPEs) to entrap bacteria in a dark process and subsequently kill the bacteria upon irradiation with visible light. This remarkable technology not only provides an effective method for killing microbes while displaying a low toxicity to organisms, but also represents a method that should not promote the formation of resistant strains of microbes. These innovative coatings will revolutionize how individuals disinfect medical areas, offices, homes, instruments, clothes and material goods, which will significantly reduce the number of infections and diseases transmitted from microbes.

In partnership with his students and collaborators, Whitten’s innovations and discoveries have the potential of impacting the health of our community and those all around the world. This extraordinary pursuit is just one of the many reasons Dave Whitten was chosen as an 2020 Innovation Fellow. 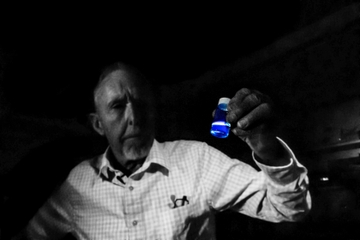 Whitten received his B.A., M.A. and Ph.D. in Chemistry from Johns Hopkins University. After completing his Ph.D. with Alsoph Corwin in 1963, he spent a tour of duty as a U.S. Army officer assigned to NASA doing research at the Caltech Jet Propulsion Laboratory (1963-1965). Following a postdoctoral stay in the Chemistry Department at Caltech with George Hammond (1965-1966), he joined the chemistry faculty of the University of North Carolina at Chapel Hill (1966). He moved to the University of Rochester in 1983. While at Rochester, he was twice department chair and founding director of the NSF Center for Photoinduced Charge Transfer (1989), a pioneering multidisciplinary research center promoting university-industrial collaborative research.

In 1997, he became a technical staff member at Los Alamos National Laboratory and was co-founder and chief science officer of QTL Biosystems, a company developing biosensing and bioassay technology in Santa Fe, NM from 2000-2005. In 2005, Whitten joined The University of New Mexico as a professor in the Department of Chemical & Biological Engineering and is currently a distinguished professor in the department and associate director of the Center for Biomedical Engineering. In 2010, he was elected as a fellow of the American Chemical Society.

Whitten’s professional activities have included serving as editor-in-chief of Langmuir, a peer-reviewed journal published by the American Chemical Society, from 1998-2014. In 2015, he joined the editorial board of ACS Applied Materials and Interfaces as an associate editor.

Along with his family, Whitten has traveled and lived in various parts of the US, Europe, Asia and South America. He was a visiting professor with extended stays in Germany, Switzerland, Japan, Brazil and most recently, Austria. In recent years, he participated in several worldwide outreach activities on behalf of the American Chemical Society in its ACS on Campus program.

Whitten’s current areas of research interest include spectroscopy, molecular assemblies, diagnostics, interfaces, conjugated polymers and antimicrobials. Motivated by a desire to find a better method for disinfection, Whitten and his students and collaborators have developed novel antimicrobial polymers and oligomers (smaller and simpler versions of the polymers), conjugated polyelectrolytes (CPEs) that have unique properties as antimicrobials, killing bacteria, viruses, fungi and biofilms in dark- and light-activated processes. Dr. Whitten’s research focuses on the mechanisms by which these compounds are active and on several potential applications based on their antimicrobial properties.

CPEs can be made into antimicrobial coatings that have the ability to destroy bacteria slowly in the dark or rapidly on exposure to light. Composite materials have been used to self-clean the accumulation of dead bacteria, which allows the coating to retain its biocidal effectiveness through multiple uses–with high toxicity to microbes, but not to mammalian cells. Thus far, CPEs have not been found to promote the formation of resistant strains of microbes and, in cases studied thus far, laboratory strains and antibiotic resistant strains have shown equivalent vulnerability to the CPEs. Perhaps the greatest commercial potential for the CPE technologies are as wipes, sprays and coatings for solids and plastics, such as surfaces in hospitals and public facilities. In December 2015, he joined with colleagues to start a new company, BioSafe Defenses, LLC, to commercialize these technologies.