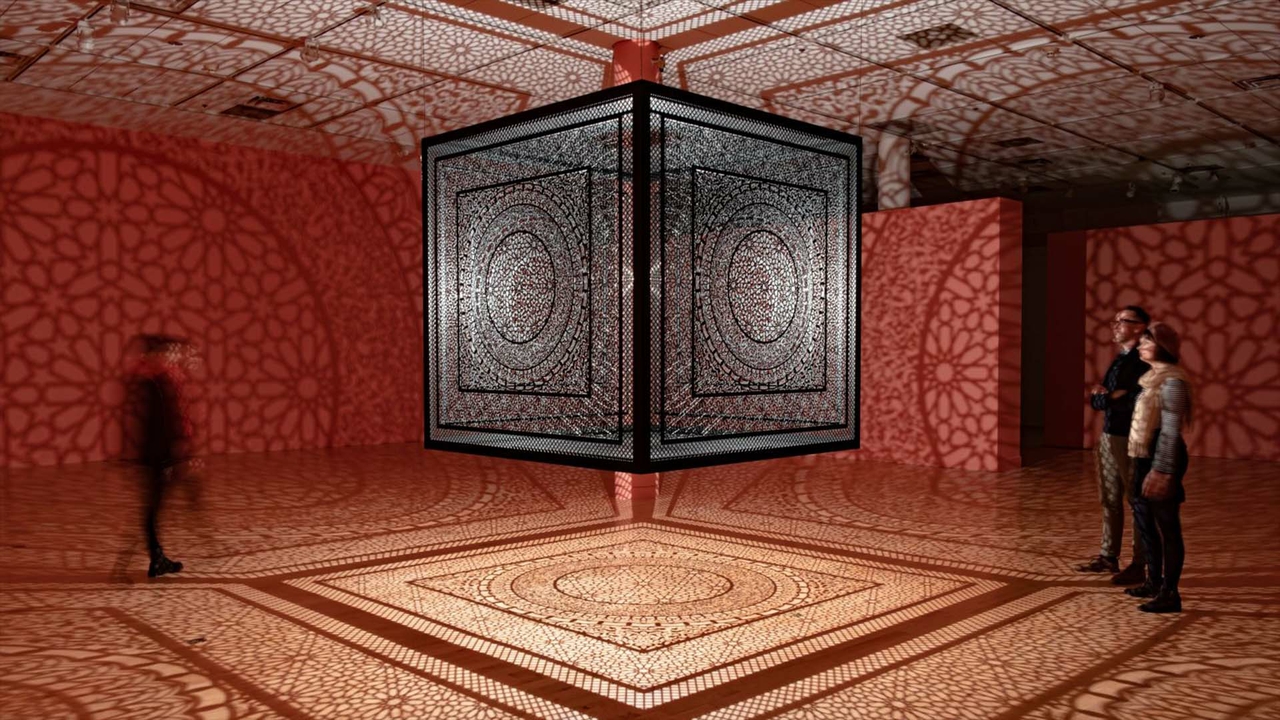 “Mysterious Inner Worlds is a continuation of our efforts to showcase diverse artists,” said Mary Statzer, the museum’s Curator of Prints & Photographs, who organized and curated the event. “To the best of my knowledge, this is the first time that the artwork of a Pakistani-American woman has been featured on UNM’s campus. The work is beautiful and fosters kindness, empathy, and inclusion, which also feels important.”

The artist will discuss her life and work in A Conversation with Anila Quayyum Agha with Statzer on Thursday, March 24.

“Agha immigrated to the United States from Pakistan shortly after 9/11. She speaks from first-hand experience about the challenges of immigration in her work and when talking about her life. We think this content will be interesting and relevant to UNM students who form our core audience,” she continued.

Agha combines forms from Islamic architecture with her own concepts about patterns of sacred and worldly spaces. Her work ranges in scale from monumental installations to intricate embroidered drawings. She is inspired by her personal experiences as a woman and an immigrant from Pakistan, arriving in the US just before September 2001, as well as her concerns about the environment. Agha’s work engages more broadly with the dynamic and contradictory relationships among immigrant experiences as well as the intersectionality of gender, religion, labor, and social codes.

The centerpiece is the award-winning sculpture Intersections, a large steel cube pierced by geometric and floral patterns inspired by traditional Islamic architecture. Suspended from the ceiling and lit from within by a single light source, shadows are cast on the floor, ceiling and walls, as well as on the viewer, making every aspect of the UNM Art Museum’s Main Gallery a part of the artwork. The effect is lush, peaceful, and immersive. Coming out of Agha’s own experience in Pakistan where she was denied access to Islamic sacred spaces because of her gender, she has created a sanctuary that fosters feelings of belonging. The glowing light and ornate patterns are soothing, while the concepts behind the piece are challenging. With Intersections, Agha pushes against binaries of public versus private, religious versus secular, as well as inclusive versus exclusive. In 2014, Intersections won both the Public Vote and Juried Grand Prize at ArtPrize in Grand Rapids, Mich.

Agha, who studied textile design, treats drawings like textiles by embroidering paper with thread and beads sourced from her native Pakistan. These works, inspired by the memory of her mother’s quilting circles, reference women’s labor and the skill of immigrants who have traditionally been excluded from creative expression and undervalued in the artworld. These early experiences started Agha thinking about the plight of women and are the foundation of her feminism. The exhibition will feature seven of her mixed media drawings.

Agha was born and raised in Lahore, Pakistan. She received her BFA from the National College of Arts in Lahore and her MFA from the University of North Texas. She is Associate Professor of Drawing at the Herron School of Art and Design at Indiana University in Indianapolis and is currently the Morris Eminent Scholar in Art at Augusta University in Georgia. In 2021, she received the Smithsonian Fellowship in the Arts and will spend the summer of 2022 in Washington D.C., conducting research for future projects. Agha’s work is in many private and public collections, including the Cincinnati Art Museum in Ohio and the Peabody Essex Museum in Salem, MA.

Mysterious Inner Worlds will be on view in the UNM Art Museum’s Main and Van Deren Coke galleries from Feb. 18 through July 2, 2022.

Immerse yourself in Mysterious Inner Worlds with a session of Mindful Looking. Justine Andrews, Associate Professor of Art of the Medieval Mediterranean, will guide participants through meditations, with Anila Quayyum Agha's work as our focal point.

Masks are required for all visitors regardless of vaccination status.

Over 100 undergraduate Intro to Photography students have photographed the exhibition. A selection of their work will be on display in the Clinton Adams Gallery, opening in late March. Stay tuned for more details about the project.