A rainstorm passing through Albuquerque can frizz your home television satellite signal, and degrade signals relaying data from space or across long distances at the radio frequencies we all use now. But what happens when you use frequencies much farther up the spectrum?

There is a new effort underway to understand some of the problems weather turbulence can cause at those higher frequencies.

The National Aeronautics and Space Administration, the U.S. Air Force Research Laboratory and the University of New Mexico are working together on a project that explore climate impact on unused radio frequencies in the 70 to 80 gigahertz range.

The first step is to understand the effects of atmospheric turbulence near ground level. So NASA sent a team of experts from the Glenn Research Center in Ohio to install a transmitter on Sandia Crest. That transmitter has begun transmitting a continuous beam to receivers atop a building near the Albuquerque Sunport.

COSMIAC, a UNM research center in the School of Engineering leases space in the building and Nick Tarashenko, a graduate student in the Electrical and Computer Engineering Department at UNM helped put together the project and monitors the equipment.

Tarasenko also works at AFRL which has supplied some of the equipment used in the project. Both NASA and AFRL have 24/7 access to the data being collected.

The 23 kilometer beam travels from the crest to the floor of the Rio Grande valley through a grade differential of about 5,000 feet. That allows the researchers to collect information about how rain, snow, and windblown dust particles degrade the signal on its journey. The information will be used to determine the minimum amount of power to assure the beam will reach its destination. 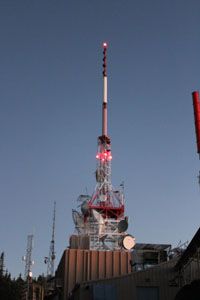 Tarasenko is working with interns to program a data application that records temperature, wind and relative humidity daily at the transmitter and receiver sites and archive it for future use.

The long-term benefit of the experiment may resolve spectrum frequency crowding. “Everyone has phones with cameras that are getting better and better and better. And all these people have demand for video and photos to be instantaneously delivered to them on a cell phone so that increases the amount of bandwidth that each person needs,” said Tarasenko. “So at some point you reach a limit on the available bandwidth there is in general. Extending communication links to higher frequencies is a way to provide more bandwidth.”

UNM Distinguished Professor of Electrical and Computer Engineering Christos Christodoulou notes this is the first attempt at characterization of the atmosphere at this frequency level using different elevations anywhere in the U.S. He expects the experiment to produce very useful information.

Christodoulou said this collaboration, involving program manager Steve Lane at AFRL and James Nessel the principal investigator at NASA Glenn Research Center is a good one for the university. Lane initially envisioned the experiment and was able to bring together private industry and NASA as collaborators.

Initially, the project involves a radio beam from Sandia Crest to the building. That will eventually be expanded to include an optical beam, which can carry even more information, in a more secure way. The experiment is expected to last at least three years.

NASA is involved in the project for its potential benefit for long-range space communication. AFRL is interested in any communication potential for military use. At UNM the benefit allows graduate students to get unique research experience.

For the rest of us, the eventual benefit may be to watch cat videos anytime, anywhere without interference.