Correspondent Megan Kamerick interviews end-of-life planner Gil Rubin, who is the coordinator of the upcoming Before I Die Festival. As the world battles a pandemic, it is especially apt to talk about facing death and dying, a topic many people would rather avoid.

NMiF producer Matt Grubs talks with New Mexico Secretary of State Maggie Toulouse Oliver about how voters should handle absentee ballots in the closing weeks of the election, as well as how county clerks will have a head start – if they take advantage of it – in counting absentee ballots, thanks to a state law that lets those ballots be tabulated much the same as early in-person votes are in the days leading up to Nov. 3.

NMiF began the week by hosting a debate between the three candidates hoping to fill the U.S. Senate seat that will be vacated by Sen. Tom Udall at the end of this year. Vying for the position are current U.S. Rep. Ben Ray Luján (Democrat), former TV meteorologist Mark Ronchetti (Republican) and retired nuclear scientist Bob Walsh (Libertarian). This week’s NMiF contains an excerpt of that conversation. The full hour-long debate, which aired on NMPBS last week Sunday, can be seen in its entirety at the VOTE 2020 page on newmexicopbs.org.

Gene Grant and The Line opinion panelists look at how Gov. Michelle Lujan Grisham continues to try to bring down record-breaking coronavirus case numbers by restricting – but not shutting down – businesses throughout the state. New rules that go into effect Oct. 23 include a 10:00 p.m. closing time for retail shops, and mandatory certification for restaurants to stay in business.

The Line also looks at more fallout over last week’s destruction of a monument on the Santa Fe Plaza. The toppling of the controversial obelisk left the city divided; many had been calling for its removal, while others wanted it left alone. The Line ends with a debate over Attorney General William Barr’s praise of Operation Legend in Albuquerque during a visit last week.

Things to Do Before You Die
Correspondent
Megan Kamerick 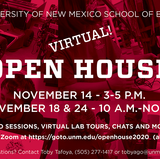