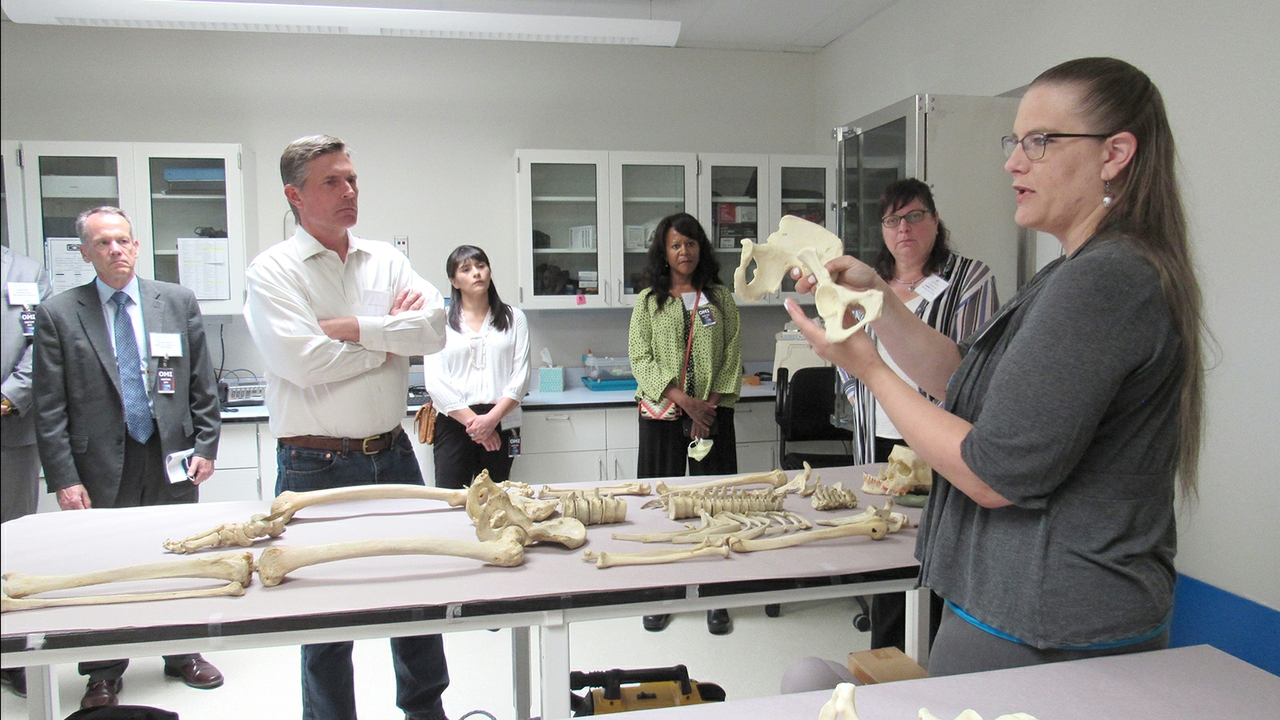 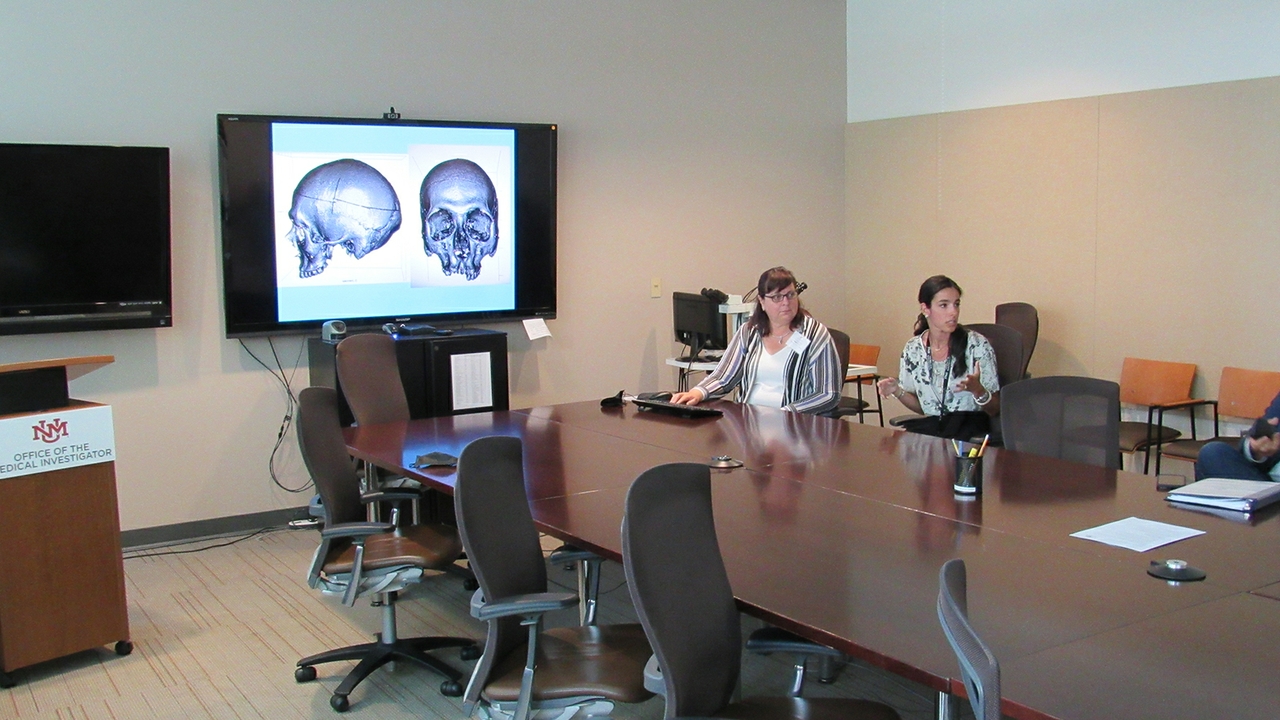 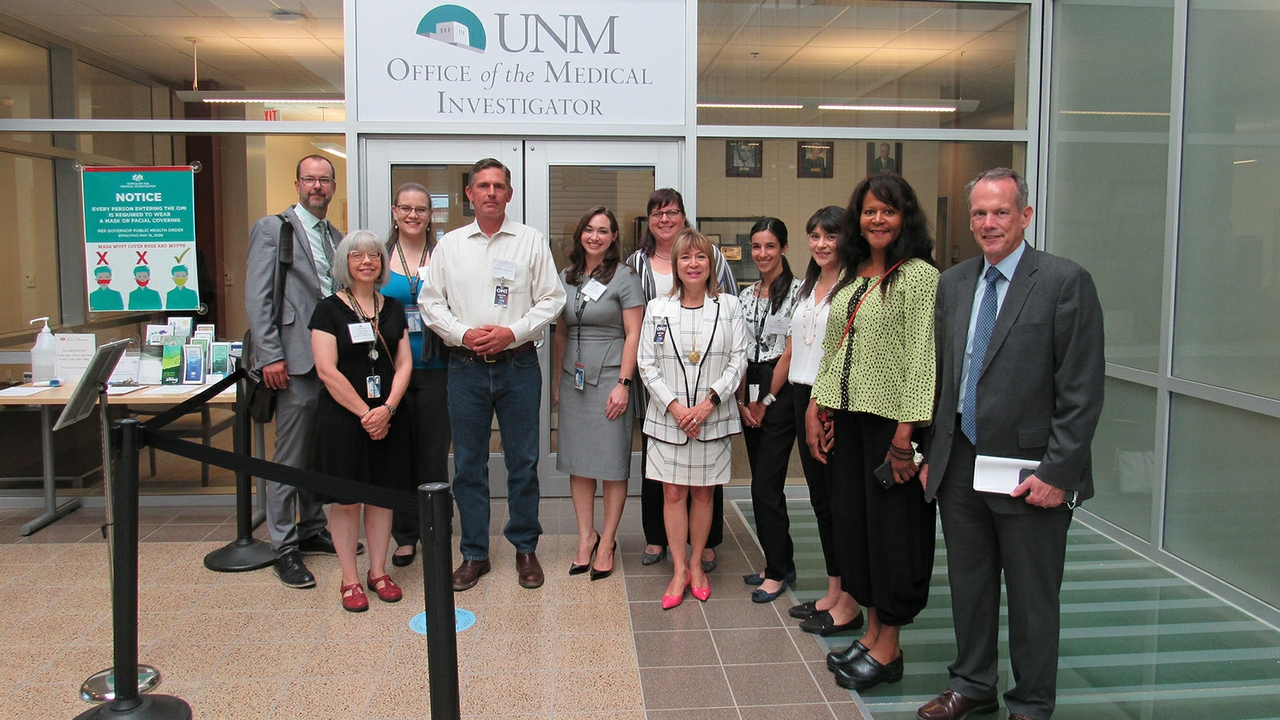 U.S. Sen. Martin Heinrich (D-NM) visited the Office of Medical Investigator (OMI) at The University of New Mexico recently to see the work being done by forensic anthropologist Heather Edgar and her team to improve the identification of Native American remains and resolve missing persons cases.

Edgar worked with many at UNM to create the New Mexico Decedent Image Database (NMDID), which includes thousands of whole-body CT scans. Each scan contains about 10,000 images of a single body. The scans are valuable in many research areas, including developing methods to help make positive identifications of unknown deceased people.  Anthropologists compare unknown individuals to data about known individuals, narrowing the pool of missing persons for comparison using estimates of sex, age, and other characteristics. But in some cases, such as for Native Americans, there is an inadequate comparison sample size, leading to misidentification or delays in identification.

“My hope is that we can reduce the period that a missing person who is deceased remains missing. This work has to potential to shorten the time that families don't know what happened to their family member. It has the potential to increase justice. I can't think of a better result than that."

A primary tool for identification of unknown individuals is the biological profile, Edgar explained. This description of a deceased person includes estimates of their sex, age, height, and population affinity. These factors help limit the pool of missing persons for comparison with an unknown decedent.

Forensic anthropologists develop the biological profile by comparing the remains of an unknown person with data from samples of known people. The reliability of these comparisons are limited by several factors, most importantly, the availability of data from appropriate, large, known samples, Edgar said, noting that traditionally, the data come from studies of donated and other curated collections of human skeletal remains, stored in museums. For several reasons, there is a dearth of these data for several populations, such as Native Americans.

“Working with staff at the OMI, graduate students in my lab, and experts outside UNM, I have developed a project that draws on NMDID, the database my team and I developed over the last few years,” Edgar explained. “Our goal is to use virtual osteological methods applied to the CT scans in NMDID to provide data for comparison with unknown individuals. This will allow us to fill in gaps among the samples, especially Native American and Hispanic/Latinx Americans, allowing for more accurate biological profiles.”

Professor Edgar, Ph.D. student Nikki Appel and Ph.D. candidate Anna Rautman from the UNM Department of Anthropology, Chief OMI Investigator Heather Jarrell, and director of the OMI Center for Forensic Imaging Natalie Adolphi gave Heinrich a tour of the OMI facilities and explained techniques, procedures, equipment, and protocols. (In keeping with cultural sensitivities, no Native American images or bones were used during the tour.)

“We have recruited most of the members for this group already. I hope they will help the research team communicate with tribes and other groups, and also help us steer the research so that we ask questions of interest to the community.  Further, we plan to continue to involve Native American students in all aspects of the research,” she said, adding that a priority of the project is to help promote new opportunities for young Native American and Hispanic/Latinx STEM students and early-career researchers.

Funding for the pilot phase of the project came from UNM ADVANCE and the Department of Pathology. Edgar is hoping to get further funding from the National Institute of Justice and congressionally directed spending.

“My hope is that we can reduce the period that a missing person who is deceased remains missing. This work has to potential to shorten the time that families don't know what happened to their family member. It has the potential to increase justice. I can't think of a better result than that,” she concluded.

** In keeping with cultural sensitivities, no Native American images or bones were used during the tour.

Video by Advance at UNM