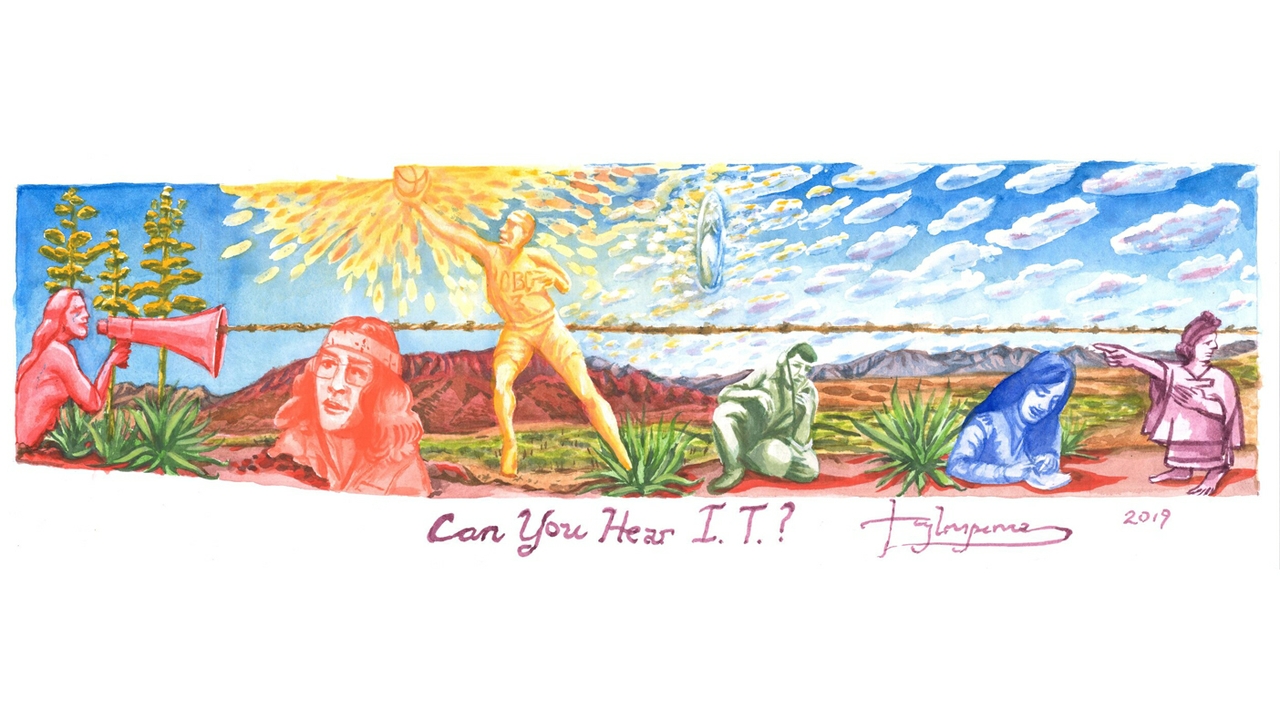 Can you hear IT? 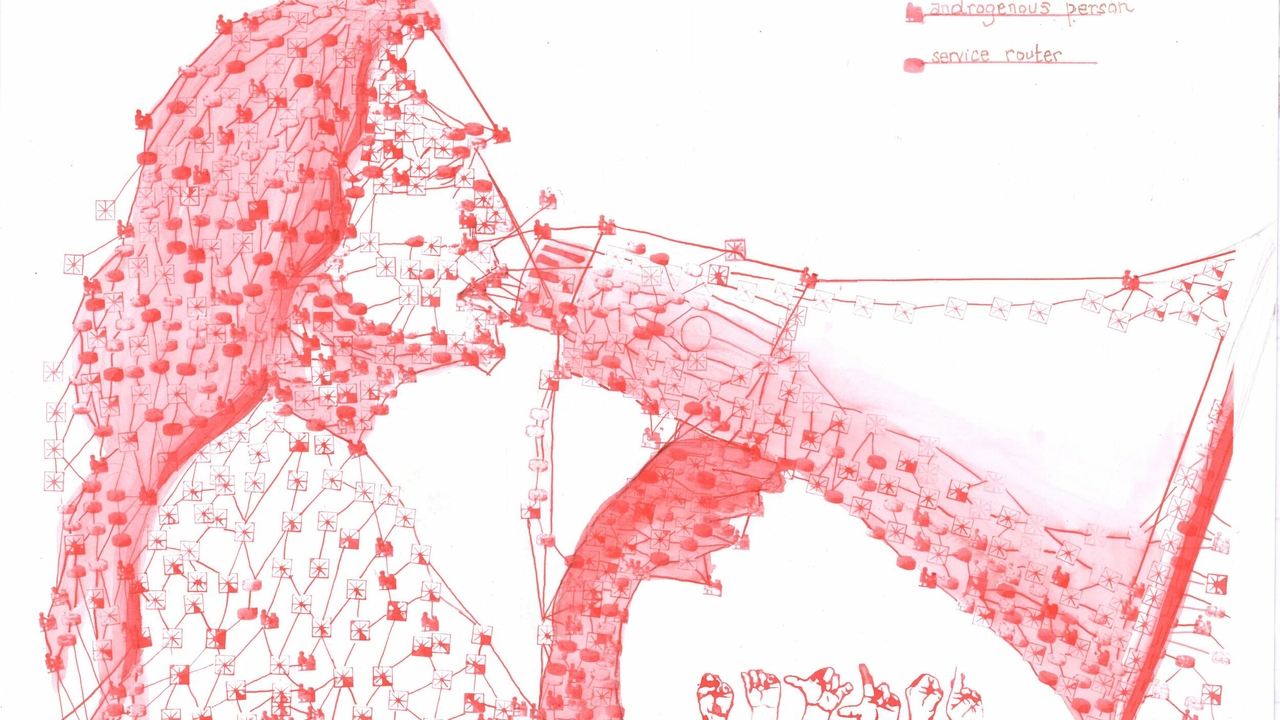 Angel of the Healing Word 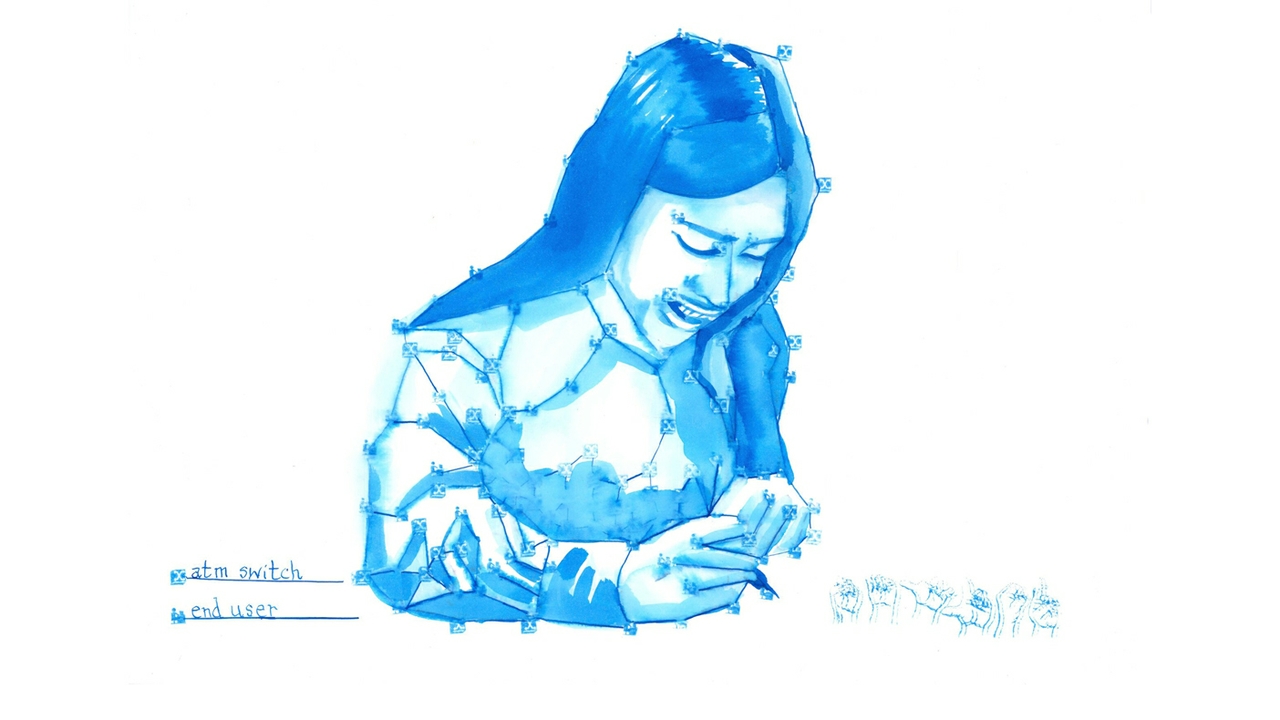 Jeannie Cohen was a student at UNM in 1975 and was artist for UNM yearbook. She represents education and learning, and the students that are brought together by IT.

A new mural being installed at the UNM Information Technology building celebrates the diversity and history of New Mexico, the state’s rich Native American cultural roots, and how they both have contributed to the development of information communication. 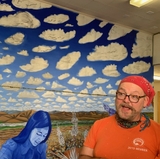 Artist Taylor Spence standing in front of the mural

The colorful 400 square foot oil-on-canvas was envisioned by muralist and UNM Post-Doctoral Fellow of History, Taylor Spence. It is meant to depict the importance of Information Technology (IT) its impact on the growth, evolution and prosperity of New Mexicans.

The piece was inspired by the Pueblo Revolt, which Spence says is an example of one of the earliest forms of mass communication and information technology.

During the Pueblo Revolt, Popé – a Tewa religious leader from Ohkay Owingeh north of Santa Fe – united Pueblo Leaders against Spanish colonists. Popé sent runners to each of the Pueblo leaders who agreed to take part in the revolt. The runners delivered a knotted yucca cord to each leader, with instructions to untie one knot per day. When the last knot was untied, it signified the day the Pueblos were to rise up in unison and overtake the Spanish.

“He timed it so that every rope had the right number of knots so that all the Pueblos would rise up at the same time,” explained Spence. “If you think about it, it’s like a text message or an email. It was not instantaneous; it was a protracted piece of information technology, but it had the same effect.”

Understanding the oldest form of information technology began in New Mexico, Spence said he realized it was the perfect fit for the IT mural theme.

“UNM IT is really dedicated to not just beautifying their building through art and history, but to deepening their employees’ engagement with what they’re doing,” Spence said. “As an artist, I want the mural to not only inspire employees, but to challenge them as well.”

He gained perspective through having listening sessions with IT employees, in order to better understand what their workplace meant to them. In addition to learning more about Star Trek than he ever wanted to know, Spence says he came away from the listening sessions with a greater appreciation for how people who work in Information Technology gain inspiration.

“I tried to understand how I could balance my historic perspective with the IT employees’ vision of the future,” Spence said.

The mural is being funded from IT internal service reserves, specifically out of one-time funds set aside for building improvements/enhancements to IT spaces.

“People, process and technology have played a powerful role in our New Mexico community through the years, removing barriers and enabling different cultures and experiences to come together,” said Duane Arruti, UNM Chief Information Officer. “The role of IT has been especially visible and relevant in 2020. What an amazing time to remember how we got here and to be inspired with what the future holds.” 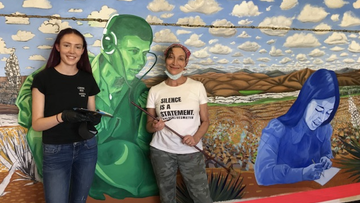 The IT funding enabled Spence to take on a student (Lucinda Poore, a freshman from Albuquerque studying Psychology) and hire an assistant – Los Angeles based artist Kathryn Villeneuve.

Villeneuve, a set painter and member of IATSE local 729 Set Painter and Sign Writers union, brought with her considerable knowledge of how to hang the 10x40 foot canvas as well as much-needed technical expertise. In addition, as a professional artist, she was charged with “rendering” the figures – taking physical or digital images Spence found and recreating them for the mural.

“These are archival images Taylor found in the UNM Archives, so I wanted to honor these historic figures by recreating them as closely as I could,” she said.

“Can You Hear IT?”
Titled Can You Hear IT? the mural includes colorful depictions of seven people, the six Angels of Information Technology surrounding and lifting up the central figure – the Lady in Blue under a bright New Mexico sky. Running through the center of the mural is a knotted Yucca cord, anchored on the right side by the hand of Popé. Elements of the mural are created using symbols that represent IT.

“The images are incorporated with network symbols, which we did using stamps, and then the contours of images are drawn with lines between various aspects of IT, and it replicates IT network diagrams,” Spence explained. “This technique makes the claim that today we are in fact made up of information technology. IT managers see and understand an important truth about the human condition: we are all connected.” 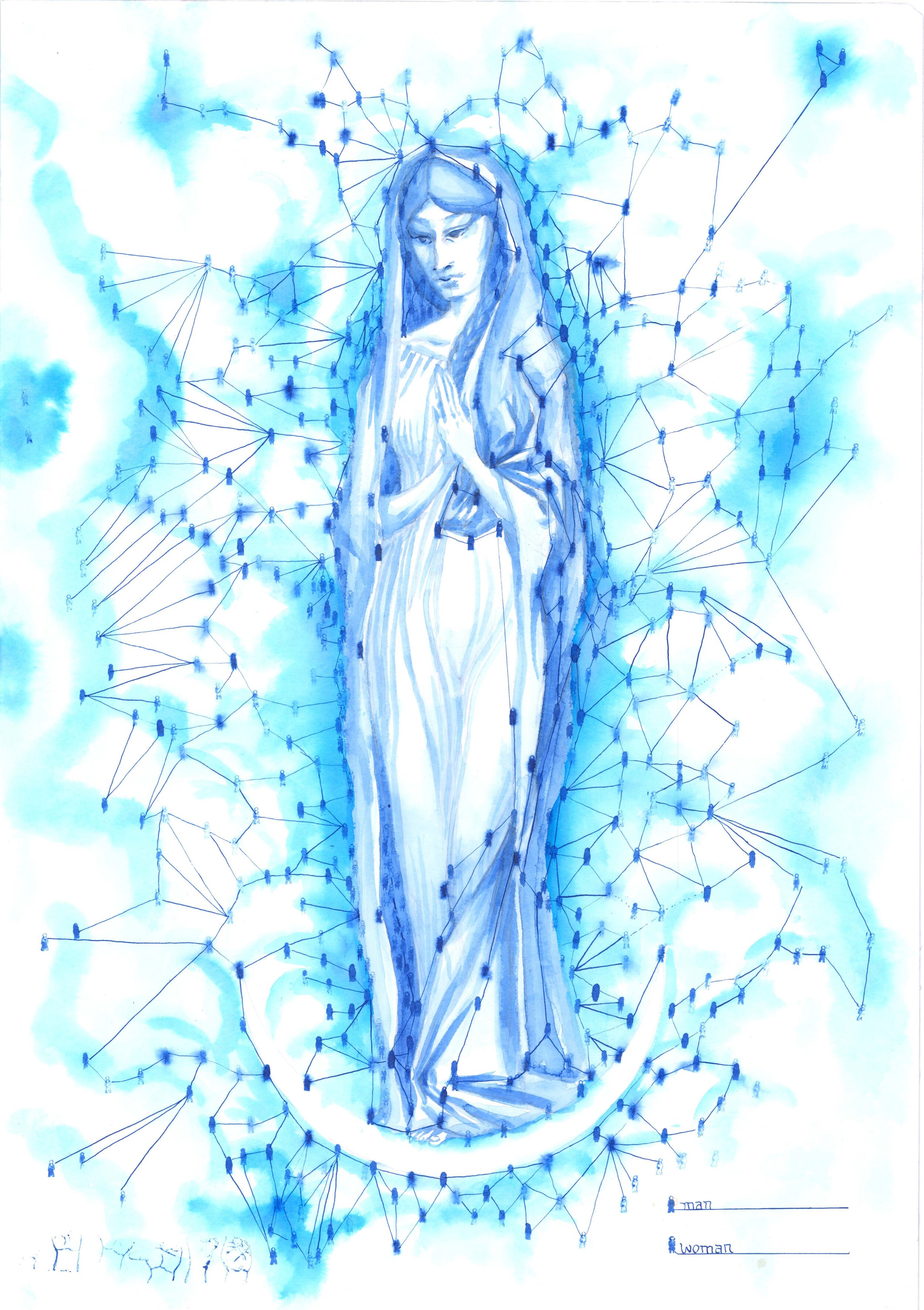 The Lady in Blue
As Spence explains in his blog, “the heart of this mural is the Lady in Blue, New Mexico’s own distinctive Guadalupe. She emerges out of the blue and white of a New Mexican sky; she is sky, and she is also the soil of Spain.”

UNM historian Anna M. Nogar writes that “the Lady in Blue is unquestionably a persistent manifestation of miracle discourse born out of the region, written into the historical landscape.”

She was Sor Maria de Jesus de Agreda, a Spanish nun who lived and died in the Soria region of Northern Spain (1602-1665), and who claimed that six angels enabled her to travel to colonial New Mexico to deliver a message about the Catholic Christ to Indigenous groups. First appearing in the region in 1628, the Lady in Blue was at once a code switcher, a translator and a messenger.

In the mural, Spence chose to depict the Lady in Blue using glow-in-the-dark blue and white paint as a symbol of her benevolent vigilance both day and night.

The Angels of Information Technology
“Every person in this mural is a person of color,” Spence said. “I wanted to identify the role that UNM has played in lifting up and bettering the lives of minority people. That’s what we do and it’s our mission.”

The six Angels of Information Technology that accompany the Lady in Blue each symbolize a specific minority historic figure, but also broader themes of that they represent.

“The idea here is that all human endeavors are the products of social networks,” Spence explained. “Each one of the figures, while they’re historic and important, is the product of a social network.” 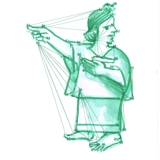 Malinche | Angel of Code Switching
Malinche, on the far right of the mural, is closest to the hand of Popé. She was born in the fifteenth century and played a significant role in the Spanish conquest of the Aztec Empire. Acting as an interpreter, advisor and intermediary for a Spanish conquistador, Malinche was the original American code switcher.

Jeannie Cohen | Angel of Education
Cohen was a student at UNM in 1975 and was artist for UNM yearbook. Spence found her likeness in the UNM archives and was captivated by her smile. She also represents education and learning, and the students that are brought together by IT.

Henry Bake Jr. III | Angel of Cultural Distinctiveness
As a Navajo Code Talker during World War II, Bake was one of the Diné troops who used a secret, unbreakable code to convey troop movements and military information leading to U.S. victory in many major battles.

Keith McGee | Angel of Hope
Lobo Basketball player Keith McGee is placing the sun in the sky of the mural, and is the only living person depicted. The Lobo from Rochester, New York and his amazing physical feats represent the aspiration and courage of the future of Information Technology. 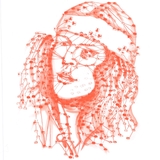 Larry Casuse | Angel of the Just Voice
Diné Activist and president of the Kiva Club, Casuse lead a protest against what he considered immoral actions the UNM Board of Regents in 1972. This is the first mural to memorialize Casuse.

“I think for me Larry represents the passion, power, commitment and idealism of UNM students,” Spence explained.

Dolores Huerta | Angel of the Healing Word
Farm worker activist and New Mexican native, Huerta represents the New Mexican tradition of translating the region’s wisdom. She holds a megaphone to project community power to improve the lives of other people in different locations. The megaphone also holds the other end of the knotted Yucca cord extending across the mural from the hand of Popé.

The mural is slated to be finished in Nov. 2020 and an official unveiling will take place when COVID-19 restrictions allow. It can be viewed in IT Building 153, on The University of New Mexico’s main campus.