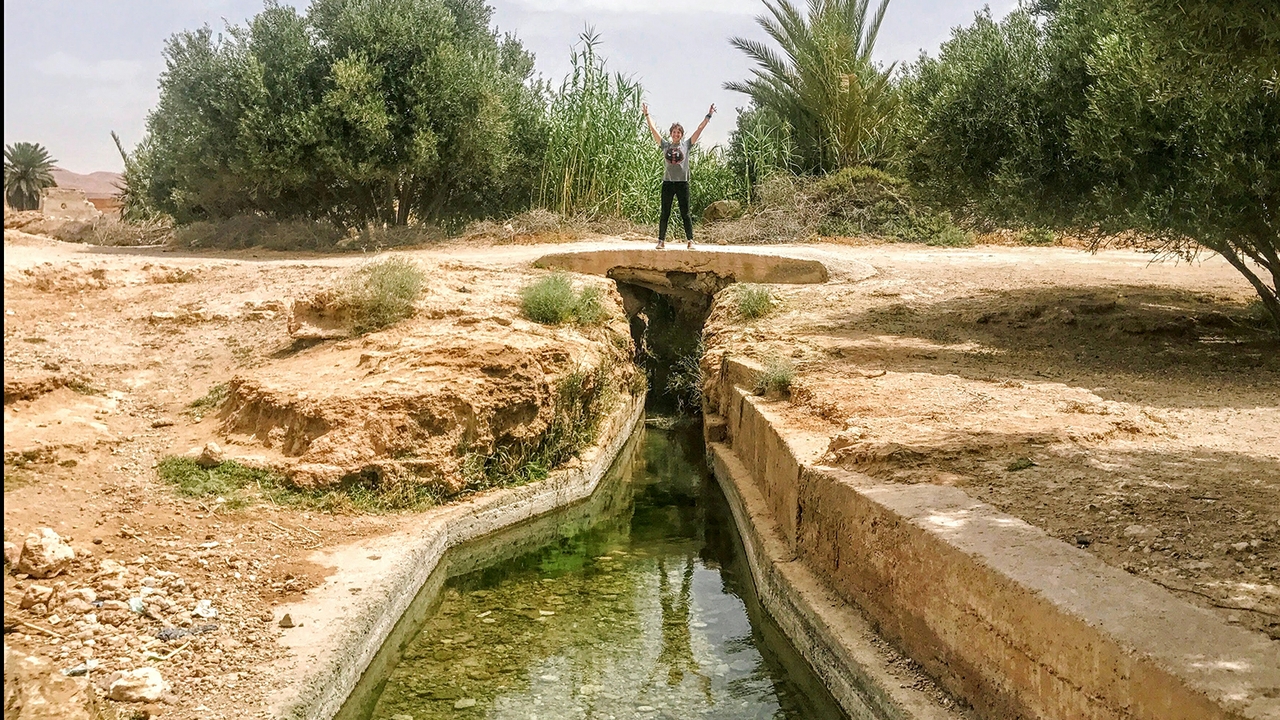 Public Archaeology student Emily Hayes-Rich was standing at the base of a mountain in Santa Fe preparing for a hike recently when she found out she had been selected for a Fulbright Award to support her master's research Old Answers to New Questions: Traditional Water Management as a Solution to Climate Change.

Hayes-Rich will spend the next academic year in Morocco studying the long-term history of the khettara irrigation networks and their resilience through time. She also received an AAUW-UNM Scholarship to further support her work, as well as an American Institute for Maghrib Studies grant. 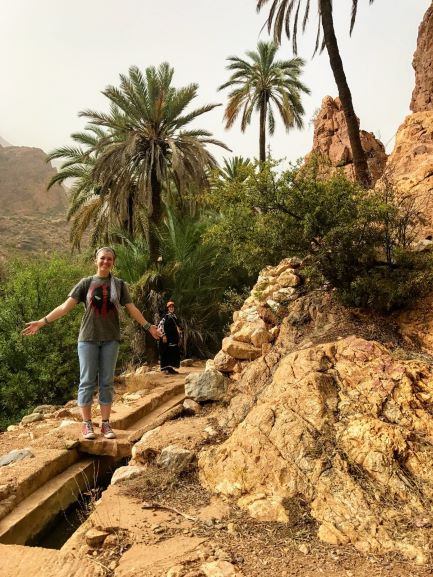 Hayes-Rich is currently a Master’s of Science student in The University of New Mexico Public Archaeology program and is considering continuing on to her Ph.D. after she returns from Morocco.

“I first encountered the khettara irrigation system during a study abroad trip to Morocco with my undergraduate institution, Lewis & Clark. My place on that Moroccan trip was the result of a long and convoluted series of events," Hayes-Rich recalled. "Like any young archaeologist, I had dreams of working in Egypt. Therefore, as I entered college, I eagerly enrolled in Arabic 101 as I thought it would begin my path towards the great pharaohs and pyramids of Giza. Immediately, I fell in love with the language. Still believing that this path was leading me to Egypt, I enrolled in the only Arabic-speaking study abroad program offered through my college, the one to Morocco.”

Once there, she said she experienced a feeling of familiarity.

“I was raised in rural northern New Mexico in a small town called Pojoaque, and the minute that I arrived in Marrakech, it felt like home. As I began my studies, the eerie familiarity only grew stronger, until it reached its peak one early morning at the edge of the High Atlas mountain range and expansive Saharan desert. During this trip to the Sahara, our guide casually mentioned an ancient irrigation system that was crucial to the success of people living in these arid regions. I looked over and saw something I had never really expected to see. An irrigation system that so closely resembled the one that I had been raised with: an acequia. Here it was, 5,000 miles away, carved into the Moroccan dirt,” Hayes-Rich marveled, adding that it sparked a curiosity to find the connection between the New Mexico acequias and the system laid out before her. After receiving a grant, she remained in Morocco and continued to study the khettara irrigation system and finished her Honors thesis.

“By understanding the historical trends that lead to the life and death of the khettara in Morocco, we can better understand how to manage and assist modern day communities struggling under the effects of desertification and climate change... I believe that the khettara irrigation system in Morocco and its cousin, the acequia, here in New Mexico is one way in which the past can be a solution to the future.”

After enrolling at UNM, she applied two more times for a Fulbright to continue her research, only to be “non-selected” and then to come in as an alternate.

“Having come so close yet still not getting it, the idea of applying again was daunting. However, spurred by the cheering of the people around me, and especially by my new advisor at UNM, Dr. Frances Hayashida, I decided to try one more time. I was standing at the base of a hike in Santa Fe when I received the news on April 6, 2021, that I was a finalist for the Fulbright grant,” Hayes-Rich said. “I am so honored and excited to be able to return to continue the work that I started four years ago, sparked by an unlikely connection between Morocco and New Mexico.”

Hayes-Rich said the khettara system is similar to the New Mexico acequias in that they both distribute water through a village and agricultural fields using a complex series of canals. Both are closely intertwined with the values and lifestyles of the community in which they operate. The difference between the two has to do with the source of water. Acequia systems take their water from above-ground sources such as rivers or springs, whereas the khettara system has a complex structure that brings water to the surface from the aquifer. In this way, the khettara system allows settlement in regions that don’t have surface water.

The system itself is known around the world in a variety of different names, likely originating in 6th century BCE Persia. In the Middle East region of Afghanistan, Pakistan, Iraq, and Iran it’s known locally as kariz or karez. It can be found as far east as China and Japan, across North Africa, and in Spain, Italy, and Cyprus. It is also found throughout parts of Mexico, Peru, and Chile. Many of these systems are still used today by local communities, but they are being abandoned.

Hayes-Rich’s research will include surveys of the khettara and their associated qsors  ̶  ancient fortified settlements  ̶ to establish a chronology of abandonment and using historical public records to help establish this chronology, as well as interviews with people impacted by changes in climate. She will also spend time in Marrakech doing intensive language studies of both the Moroccan dialect of Arabic as well as the native Amazigh language Tashlheet. The actual research will take place around the town of Rissani out on the edge of the Sahara and Atlas Mountains. The data gained during her fieldwork will be analyzed using Geographical Information Systems. Using a combination of scientific, historic, and archaeological techniques, Hayes-Rich will help provide a holistic understanding of traditional water systems and their place in the modern world.

She hopes this research will provide answers to historical inquiries, as well as reveal answers to current issues regarding global climate change.

“By understanding the historical trends that lead to the life and death of the khettara in Morocco, we can better understand how to manage and assist modern-day communities struggling under the effects of desertification and climate change,” Hayes-Rich noted. “It is my hope that this Fulbright will continue me on my path of finding ways in which archaeological research not only studies history but looks at the modern application of traditional forms of water management. As archaeologists, I believe we should not only preserve and protect the past, but be ambassadors to ways in which traditional knowledge can provide solutions to modern issues like climate change. I believe that the khettara irrigation system in Morocco and its cousin, the acequia, here in New Mexico is one way in which the past can be a solution to the future.”