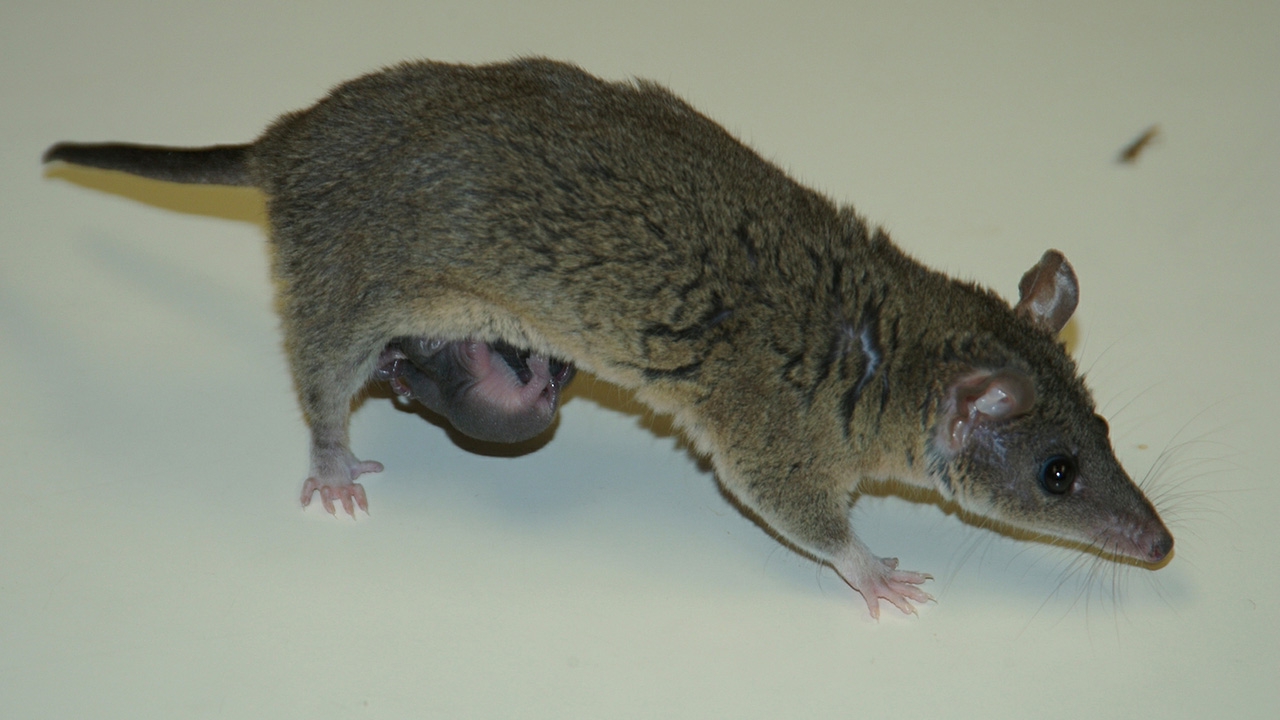 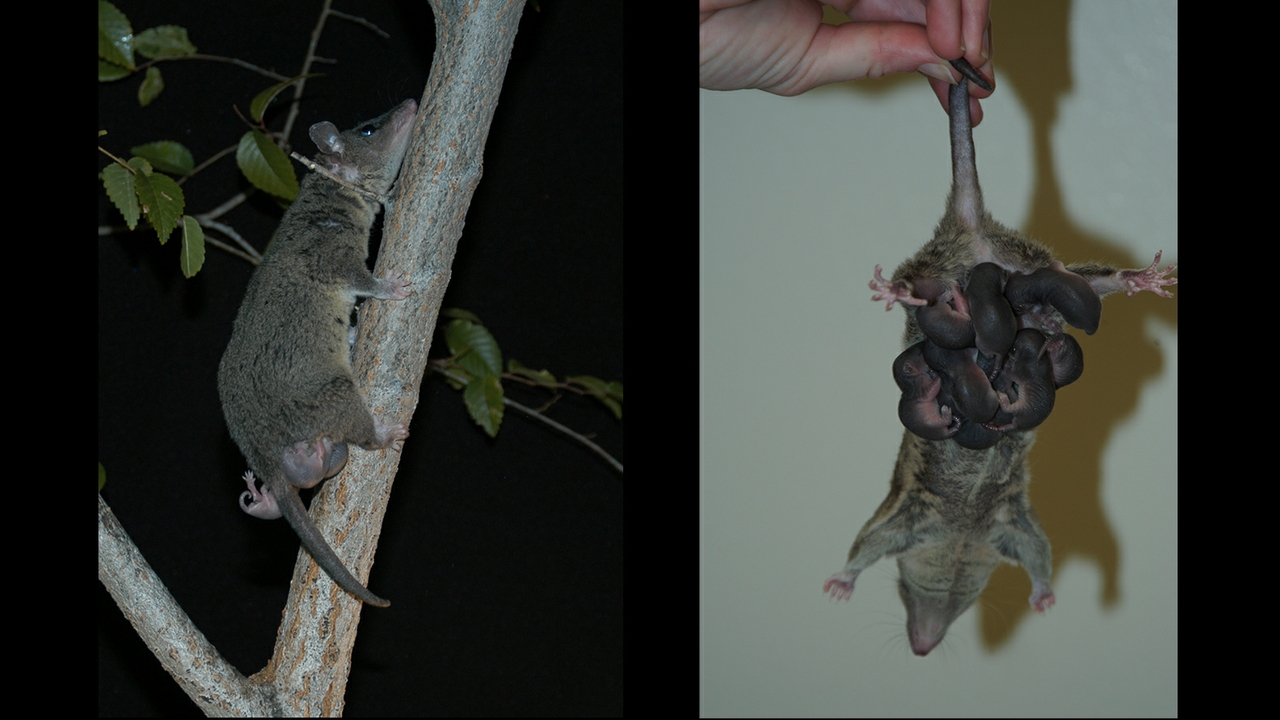 A University of New Mexico Biology professor and second-year Ph.D. student are part of a team of scientists who have examined the immune system of an unusual group of mammals, which includes a small South American opossum, to find solutions that evolution has produced to fight disease-causing pathogens.

In a paper titled The molecular assembly and architecture of the marsupial γµ T cell receptor defines a third T cell lineage published in the prestigious journal Science, an international team of scientists from The University of New Mexico, Monash University in Australia, and the U.S. National Institutes of Health has defined a novel T cell lineage, called γµ T cells, found only in marsupials, such as kangaroos and opossums, and monotremes such as the duckbill platypus.

The co-lead author on this work is Kimberly Morrissey, a second-year Ph.D. student in the UNM Biology program. She is a recipient of an NSF Graduate Research Fellowship. Rob Miller, UNM Biology professor and director of the Center for Evolutionary & Theoretical Immunology, worked with Morrissey on the research.

"Modern genomic tools applied to many species have opened the door to the myriad immunological solutions to fighting pathogens that evolution has produced."

Rob Miller, director of the Center for Evolutionary & Theoretical Immunology

The immune systems of all vertebrates  ̶ including humans  ̶ contain specialized cells, called T cells, that play a fundamental role in protecting against fungal, bacterial, parasitic and viral pathogens, which can cause diseases such as cancer or COVID. For most of the past four decades, it was generally considered that there were two T cell lineages, αβ or γδ T cells.

“T cells are usually one of two types. They either monitor and kill virally infected cells or tumor cells, or they can act as master regulators by activating or suppressing other immune cells. They are a key component in the immune response against specific pathogens and play an integral part in vaccine effectiveness,” Morrissey explained.

Miller explained that there are three types of mammals on the planet: the eutherians, marsupials, and monotremes. Eutherians  ̶  such as humans  ̶  generally have longer gestation periods and give birth to more highly developed young. In contrast, the marsupials have shorter gestation periods and the young complete their development attached to a teat, sometimes in a pouch. They are humans’ most distant relatives that give birth to live young. The monotremes are also mammals but they lay eggs. They are humans’ most distant relatives that are also mammals.

Morrissey and Miller examined the immune system of a small South American opossum species, the gray short-tailed opossum Monodelphis domestica, for their research. This was the first marsupial species to have its genome sequenced, a project Miller participated in, which was completed in 2007. The researchers look for both similarities to humans and differences.

“We study the immune systems of marsupials, like the opossum, to look for both novelty as well as conservation. Novelty would be things that the opossum has that we lack. This gives us insights into evolutionary innovation in some species that are not found in common research models such as mice and rats. Conservation, or ways in which opossums and humans are the same, gives us insight into ancient features that have been preserved over more than 150 million years of evolution and are therefore likely to be fundamentally important,” Miller explained.

“The discovery reported in this Science article is an example of something that is ancient and was present in the ancestor of all living mammals, but for some reason was lost in the placental mammal lineage (like humans). To understand why it was lost, or why we seem to be fine without it, or perhaps we have different cell types performing the same function, we will first need to know what the cell is doing in the species that have it, like the opossum,” he continued.

Evidence for the novel T cells came with the discovery of genes encoding the TCRμ protein while analyzing the first complete marsupial genome sequence of the South American opossum. Oddly distinct from conventional TCR, TCRμ was predicted to share similarity with other important molecules in the immune system, the antibodies.

In addition to characterizing the T cells that use the γμTCR, the investigators obtained a detailed three-dimensional image of the opossum γµ TCR using a high-intensity X-ray beam at the Australian Synchrotron. The γµ TCR has a unique structure, distinct from the conventional αβ or γδ TCRs. Noteworthy is the presence of the additional single antibody-like domain called Vμ with a structure similar to a unique type of antibodies called nanobodies. This discovery raises the possibility that γμ T cells recognize pathogens using a novel mechanism, different from conventional T cells.

The γμTCR has the potential to expand the immunology ”toolbox,” Miller said, adding that nanobodies are useful both for therapeutics and diagnostics and are currently generated using members of the camel family (e.g. alpacas). Marsupials (e.g. opossums) may be an alternative source, one that is smaller, easier and cheaper to maintain than llamas and alpacas.

“The discovery further illustrates the value of exploring the world’s biodiversity for novelty beyond the standard animal research models, such as laboratory mice. Modern genomic tools applied to many species have opened the door to the myriad immunological solutions to fighting pathogens that evolution has produced,” he said.

One of the observations that emerged from my research is that γμ T cells are not found in all tissues in the opossum,” Morrissey noted. “Most notably they don’t appear to be circulating in the blood. Determining where in the animal, what organs or tissues they reside, can give us insights into their role in immune responses to pathogens. One aim of my current research is to determine where γμ T cells are found in the animals and if there are differences among the cells that are related to their location.”

The research is important on many levels, Miller continued.

“In addition to the basic-science value of a discovery of a new type of T cell, it raises the potential of adding to our toolbox of recognition molecules in the immune system that can be exploited for therapeutics and diagnostics. More significant to me is it an important illustration of how studying the immune system of atypical model species reveals there are new discoveries to be made that a mouse or a human would not have revealed.”

Miller affirmed that the international collaborative effort that brought together labs with very different skill sets was of critical importance to the research.

“My lab at UNM is expert in the immune system of marsupials in general and opossums in particular and discovered the first evidence for these novel T cells. Our collaborators at the NIH brought expertise in analyzing T cells at the level of single cells. Our collaborators in Australia brought expertise in protein structure. I should add that the Australian group at Monash University is among the best in the world in solving the structure of these kinds of immune system proteins, not because Australia is famous for its marsupials. This lab normally works on mouse and human immunology,” he remarked.