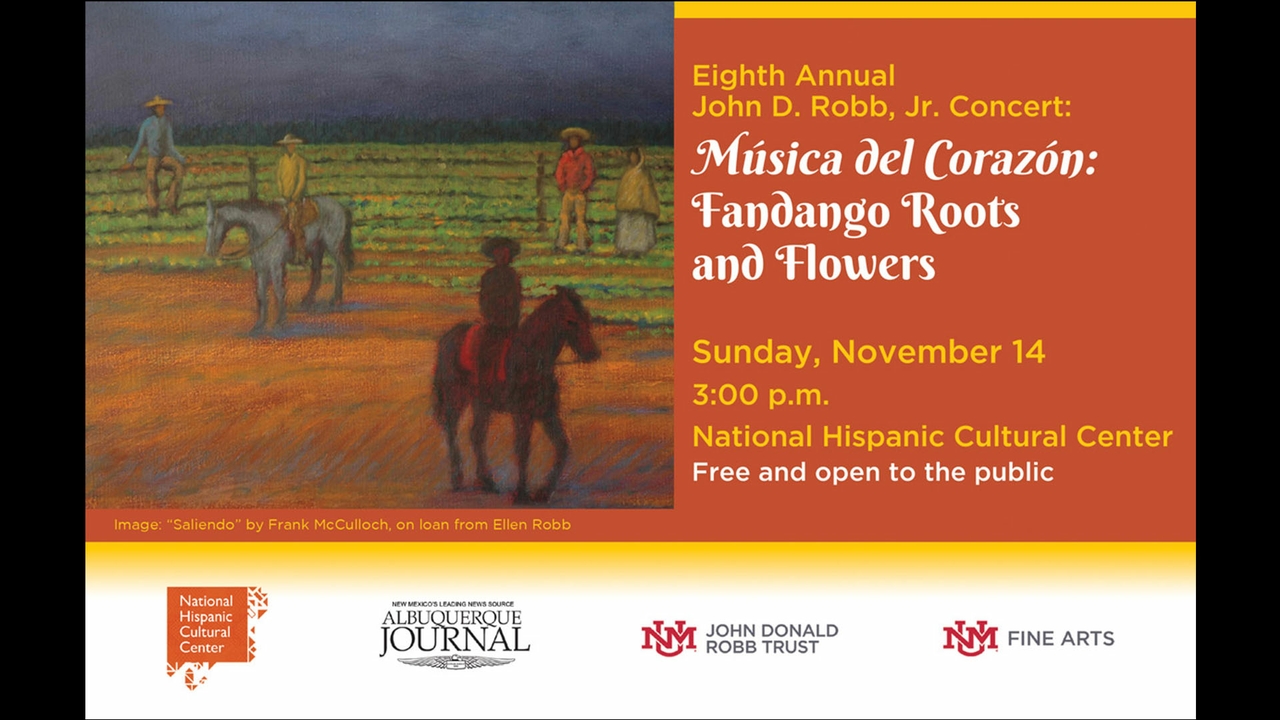 Música del Corazón: Fandango Roots and Flowers will be curated by Professor Emeritus Enrique Lamadrid of the UNM Department of Spanish and Portuguese. Performers include Son Veracruz with Otilio Ruiz and family; Vicente Griego and Marisol Encinias from the National Institute of Flamenco; and performers from the salsa group Son Como Son with César Bauvallet.

Fandangos are an intercultural tradition of intertwined music, lyric, and dance that spread to the most remote corners of the colonies of Spain by the year 1700. The word itself is of African origin, as are the percussive rhythms and energetic dance of the sub-Saharan peoples who lost their freedom, but not their music. The slave trade traveled up the west coast of Africa to Iberian ports to the Americas. Along the way, the musical traditions of Andalusian, Gitano, Afro-Latino, and Native American peoples blended and evolved.

Fandangos are also events, cultural gatherings, and popular dances. In Spain, all social sectors participated, from village fiestas to royal courts. The craze spread to the rest of Europe and was adapted for salons and stages by composers like Scarlatti and Mozart, whose opera The Marriage of Figaro features a fandango. Over the next three centuries, fandangos evolved into venues of resistance, empowerment, and liberation.

Música del Corazón will feature these living traditions. In future concerts, the Robb Trust will explore the musical recovery of the New Mexican fandango and celebrate the Baroque fandangos of New Spain and Europe.

The UNM Robb Trust prides itself in supporting the music and musical legacy of John Donald Robb, to further his inspiring commitment to education, and to advance the understanding of music of the Southwest. The Robb Trust, in partnership with composers, performing artists, educators, students, and audiences, enhances the legacy of Dean Robb by preserving the traditions of Southwest folk music, promoting the music of John Donald Robb, and supporting the composition of contemporary music.