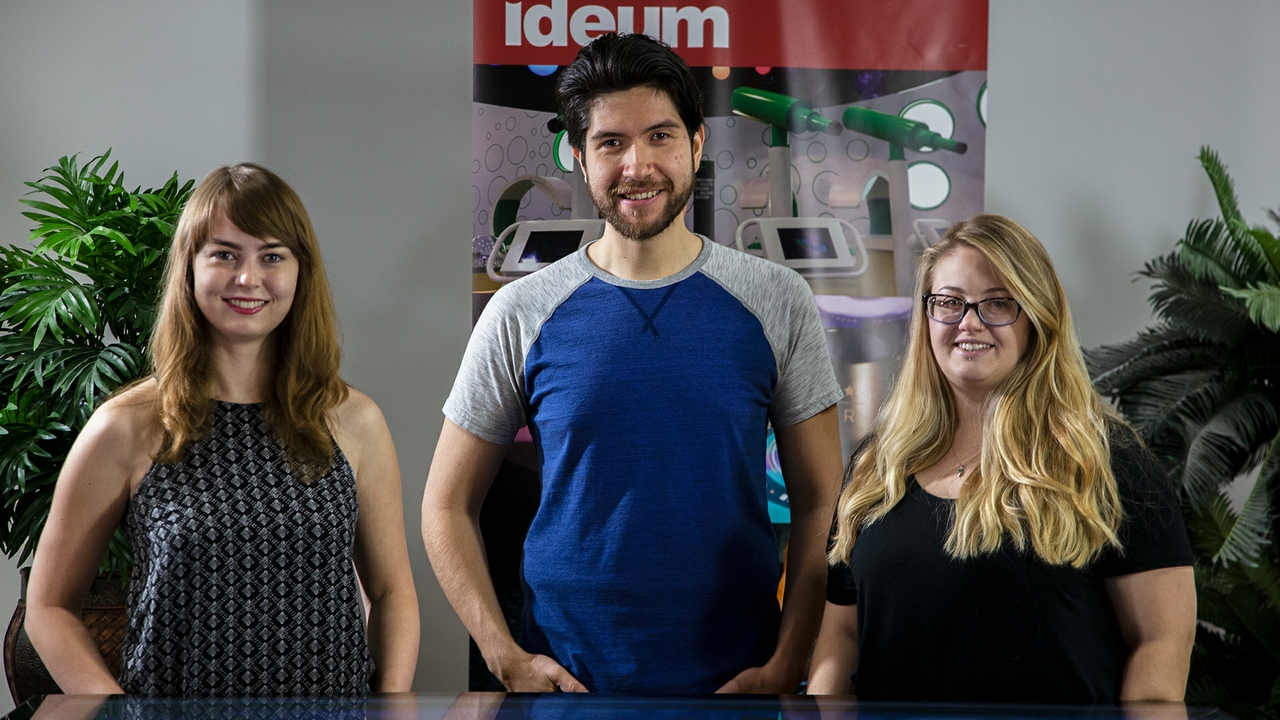 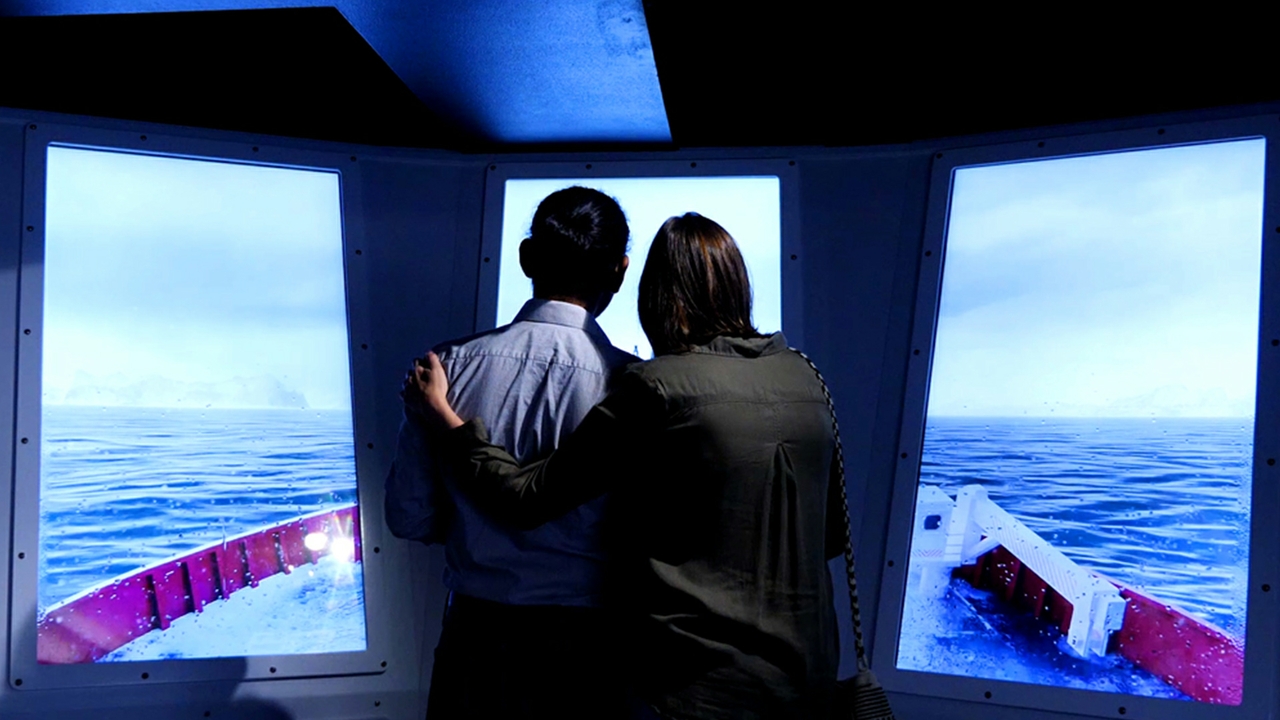 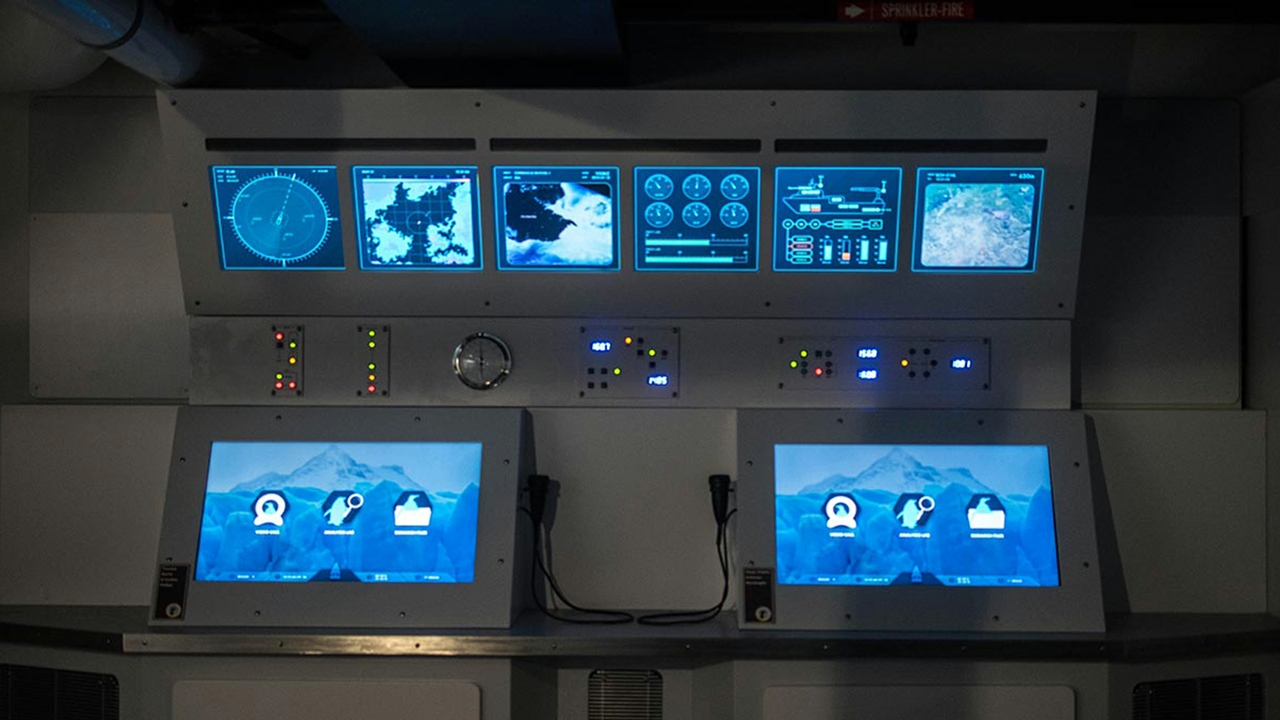 Talk to a researcher

Visitors to the Penguin Chill can have a virtual chat with a researcher on an Antarctic icebreaker ship.  (Photo courtesy of Ideum) 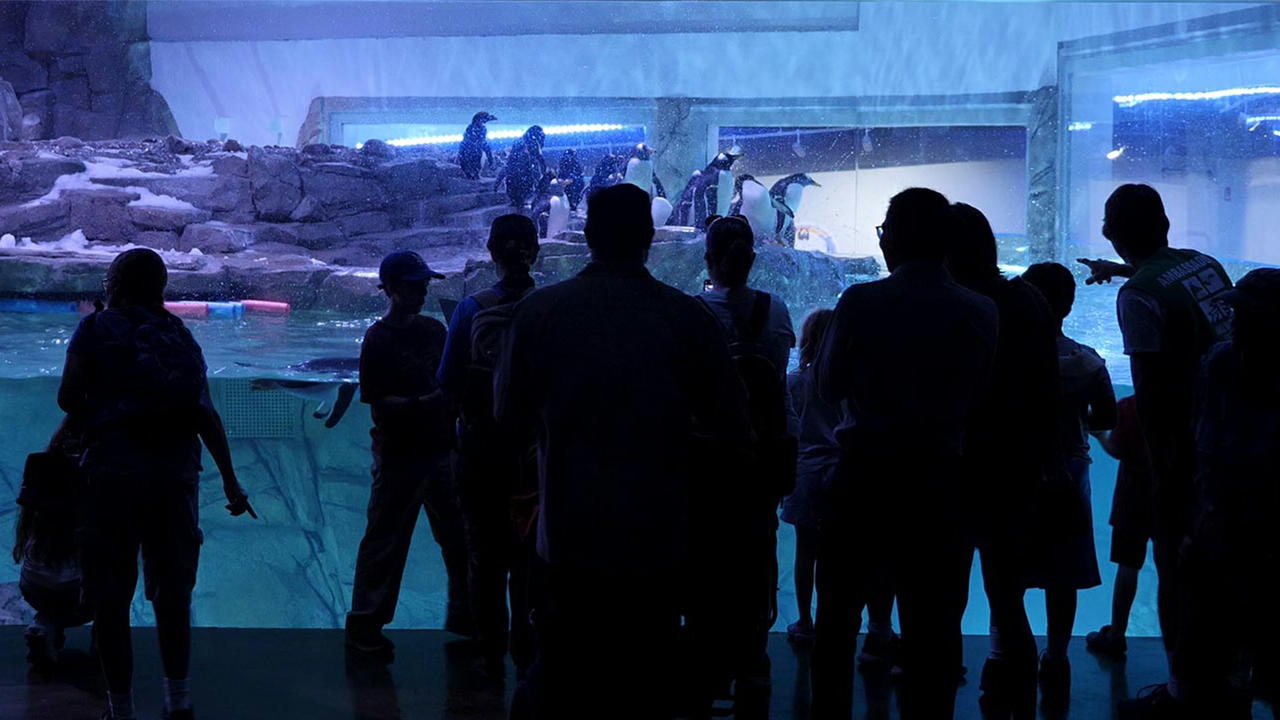 The penguin exhibit at the Albuquerque BioPark was created with the help of UNM alumni on the creative team. 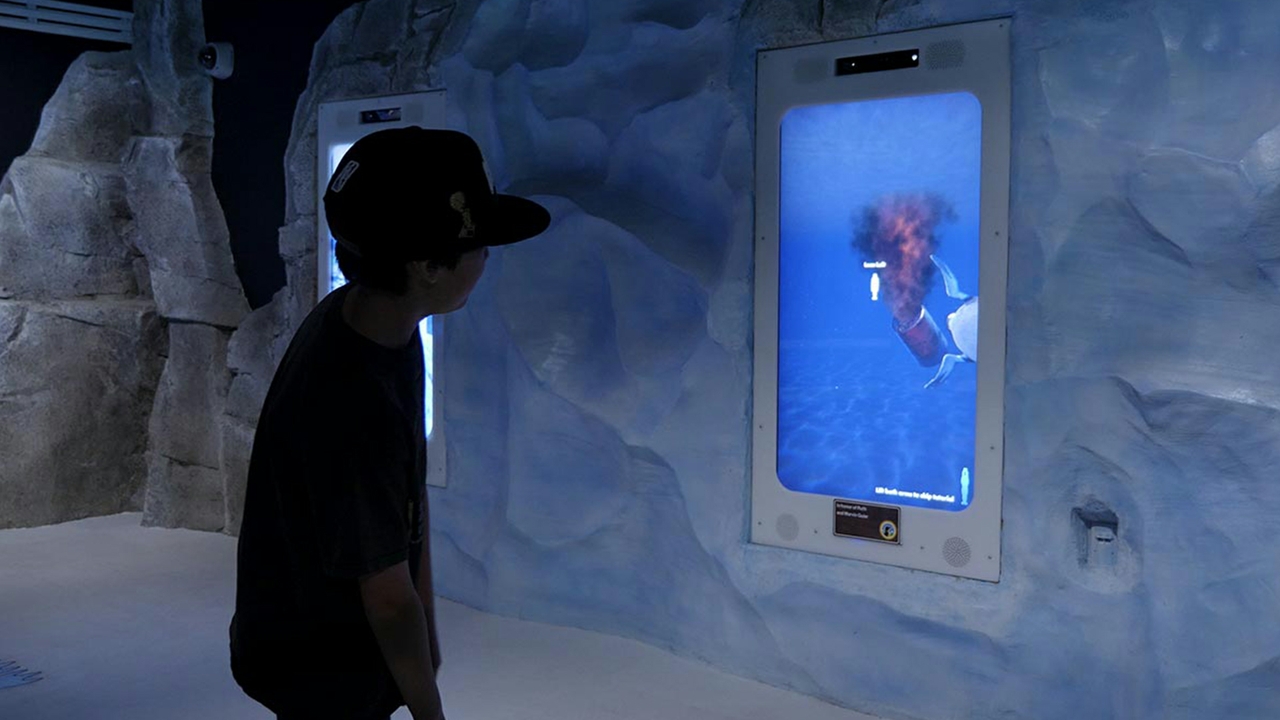 Chow Time lets children swim like a penguin through a number of hazards to catch fish.  (Photo courtesy of Ideum)

Penguins at the Albuquerque’s BioPark were just chilling – literally – one recent morning soon after the new exhibit opened, snacking on fish, and hopping off a rocky promontory to take a dip in the water that fills their glass enclosure. Soon the space in front of the penguin habitat was filled with fascinated visitors, children with noses pushed to the glass and moms and dads just as eagerly watching Albuquerque’s new residents up close and personal.

As sightseers wend their way down from the top of the exhibit to the lower level where they can watch the penguins dart through the water, they are surrounded by interactive exhibits, many created by three alumni of The University of New Mexico.

Camber Arnhart, Ally Goodman-Janow, and James Romero all work for the Corrales-based Ideum, a creative company focused on using emerging technologies to design public installations and products for museums that lead to meaningful and compelling user experiences.

Ideum designed and built exhibits that supplement the penguin habitat-viewing by adding a vivid narrative experience that lets visitors assume the role of scientists bound for the Antarctic. When they first enter, visitors see swirling overhead a simulation of the aurora australis– the Antarctic version of the Northern lights – reflecting data streamed from the National Oceanic and Atmospheric Administration. Along the way, they learn about penguin habitats, sub-Antarctic ecology, climate change, and Antarctic field research. Visitors can stand at the hull of an offshore research ship, swim like penguins to catch fish without being eaten, chat with researchers, and examine an ice core drilled from the Antarctic landscape. Before they leave, guests can learn more about what they can do to help penguins and get a special moving selfie.

“It’s kind of incredible to see people play with your applications. Insane! They get so excited and they say, ‘Wow, this is so cool,’ and I’m like, ‘I made that!’ It’s surreal.”  – Ally Goodman-Janow

Arnhart, Goodman-Janow, and Romero started at Ideum as interns while they were students at UNM. Arnhart and Goodman were computer science students who also spent time in game design classes with Jon Whetzel and Nathan Fabian. Whetzel and Fabian are members of the Sandia technical staff, and adjunct professors at UNM co-teaching game development.

Arnhart is an interactive programmer and concept artist/illustrator at Ideum after completing her bachelor of science degree in computer science, with a minor in studio art, and graduating in 2019. She hadn’t been at Ideum long when she designed and programmed the ice core sample exhibit, where visitors can find out more about the conditions in Antarctica by examining the layers of ice and snow built up over the years.

“It was a great first project to have,” she said.

Arnhart and the team found that children learn a lot from the exhibits but not always what they expect.

“We invited children and their parents visiting Ideum to test out Chow Time. I was part of the surveying crew. We would ask questions to see if the children had learned any information about penguins from the application. I asked one child, ‘What, if anything, is harmful to penguins?’ And the child responded ‘Oil barrels and orcas. Oh also, evil robots!’”

Goodman-Janow is a software developer for Ideum. She has a bachelor of science with a focus on computer science and a minor in interdisciplinary film and digital media. Goodman-Janow programmed the icebreaker exhibit, polishing up her knowledge of penguins to make the exhibit as realistic as possible. The exhibit lets visitors make virtual video calls to real-life scientists to learn more about their research.

Goodman-Janow clearly succeeded in making the experience realistic. She noted that the team has found some visitors show concern for the virtual researchers.

“I saw a child and dad using the icebreaker exhibit and the child started using the prerecorded biologist interview section of the app. The dad stopped his child from using the app, as it was later in the day, and said ‘They're probably sleeping right now, we can't bother them.’ My colleagues and I have since encountered this behavior a few times, where visitors are concerned they might be making real phone calls.”

Romero is a designer and 3D modeler at Ideum. He studied entertainment design and film at UNM. In addition to his contributions to the penguin exhibit, he worked on an interactive exhibit that lets visitors become virtual bugs at the Albuquerque Botanic Garden BUGarium.

Romero animated the Chow Time game, where children swim virtually through the treacherous Antarctic waters, encountering the dangers that penguins face every day. The scenarios can be a bit grim, but he found humor in creating the app.

“While animating the penguins for the Chow Time application, I needed to use a test animation to make sure the penguin models had a good range of motion. I grabbed a random free animation from a stock website to test on the penguins and it turned out to be a kung-fu animation. I couldn't help but post the kung-fu Gentoo penguin to the work channel. After that, I had to see how a penguin would look break dancing so, I downloaded that too.”

Romero said his classwork at UNM with teams of creative people helped him at Ideum.

“Working on teams to overcome large challenges? That’s a day in the life here,” Romero said.

Among the challenges the Ideum team encountered were meeting the goals of making the exhibits educational as well as entertaining, raise awareness of the environmental issues facing penguins and the Antarctic, trying to load the massive file for the ship bow simulation video loop into the exhibit and making the exhibits hardy enough to withstand the constant barrage of children not always gently pushing buttons and manipulating touchscreens.

Ideum invited groups of children into their headquarters to preview the exhibits and the team challenged them to “go ahead, try to break it.” Not only did they create the interactive exhibits, but also the signage and worked with the larger team to ensure the architectural finishes matched the narrative.

“I thought it came together really nicely in that space. It’s kind of incredible to see people play with your applications. Insane! They get so excited and they say, ‘Wow this is so cool’ and I’m like, ‘I made that!’ It’s surreal,” Goodman-Janow said.

“I hadn’t been to the exhibit before. I didn’t realize the scope of what we’d done so when I went I was like ‘Wow this is really a world class exhibit.’ I was proud to be part of it happy to see people enjoying it,” Arnhart said.

“It’s one thing to make a real fun experience and it’s another thing to meet the education requirements and have people walk out of it having learned something. It’s both satisfying and fun,” Romero observed.

The creativity and hard work have paid off for the UNM alums and the rest of their Ideum team. A recent news report revealed that the penguin exhibit has bumped zoo attendance by 80 percent.