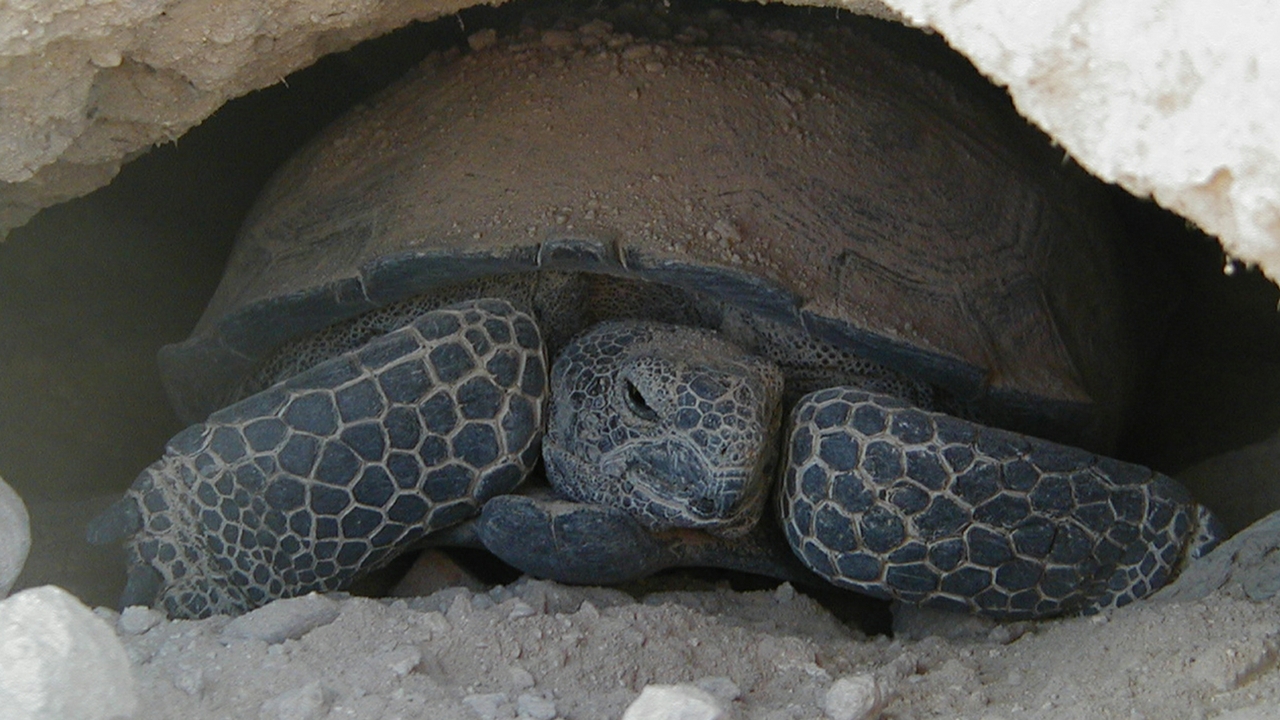 When radioactive materials are released into the environment after, for example, above-ground nuclear testing, they may be then accumulated in various organisms through breathing air, or via ingestion of water, sediments and plants. A group of researchers from The University of New Mexico and Los Alamos National Laboratory (LANL) have received funding to study the shells of desert tortoises to identify if and how radioactive elements are incorporated into their tissues.

The study, enabled with a three-year (2021-2023), $987,000 award through the Laboratory Directed Research and Development funding from LANL, will allow researchers to better map and understand nuclear events in the environment, their effects on animals, and what this could mean for humans. 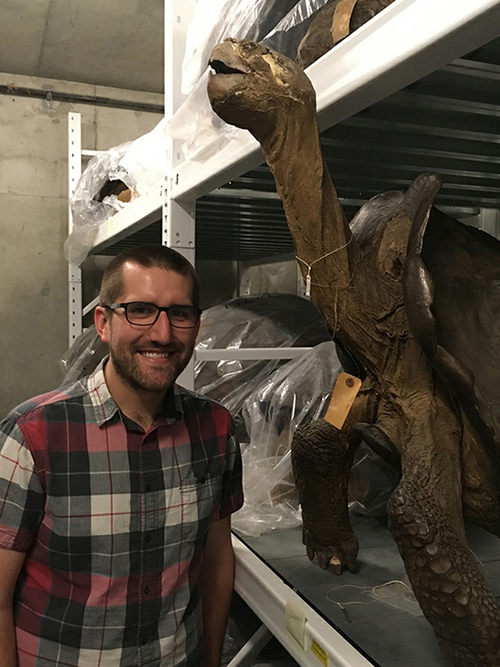 “Our project was selected as an Exploratory Research project titled Long-lived Fauna as Tracers of Anthropogenic Radionuclides. Exploratory research is intended to strengthen capabilities at Los Alamos via discipline focus…Our team is working on this project to better identify and examine long-lived fauna, such as tortoises, as passive collectors of anthropogenic radionuclides in the environment,” explained the project’s Principal Investigator Cyler Conrad.

Conrad is an adjunct assistant professor of Archaeology at UNM who graduated in 2018. His colleague in the study is UNM professor of Biology Blair Wolf. The team also consists of Allison Wende, Jeremy Inglis, Travis Tenner, Jeanne Fair, Shannon Gaukler, and Jeffery Whicker, all of LANL; Washington Tapia Aguilera from the Galapagos Giant Tortoise Restoration Initiative (GGTRI); and James Gibbs from the State University of New York, Syracuse, and GGTRI.

“It’s very exciting to be able to study tortoises, such long-lived and iconic animals, to try and better understand the processes and consequences of nuclear testing around the globe – something which is close to home for us here in New Mexico. We hope that our research helps find new ways to identify and track nuclear signatures in the environment,” Conrad said.

“Some tortoises can live longer than humans and they carry a cumulative serial record of their lives in the keratinized scutes that cover their hard, bony shells. These keratin scute rings provide a unique opportunity to see if tortoises can provide us with a time-stamped record of events such as above-ground nuclear weapons tests," Wolf explained. "Sampling tortoise shells may allow for tracing the global reach of nuclear testing and allow characterizing the specific events by the radio-nucleotide signals detected in the shells and show how these events can penetrate animal populations and communities.”

"We expect this research will have the potential to benefit animal and human populations living in locations with historic or modern nuclear activities." – Cyler Conrad, adjunct assistant professor of Archaeology

“Given my love of tortoises, I’m happy to report that no tortoises will be harmed during this study. We plan to focus our research on museum collections of tortoises during our initial phase of analysis," Conrad noted. "These are all previously collected, and deceased, individuals. Once we begin live-sampling tortoises, our sampling strategy will allow us to collect portions of their shells without harming the animal. A good analogy to this process is cutting your finger-nails. We will be completing a similar step – but on tortoise shell.”

“We are also working with Galapagos tortoises as a baseline population – a set of tortoises which should, theoretically, lack a radionuclide signature from 20th-century nuclear testing. After using museum specimens as a proof-of-concept, we plan to live-sample tortoise populations that are today living in locations with legacy nuclear testing. This will provide us with a long-term dataset to understand the implications of anthropogenic radionuclides in the environment,” Conrad said. 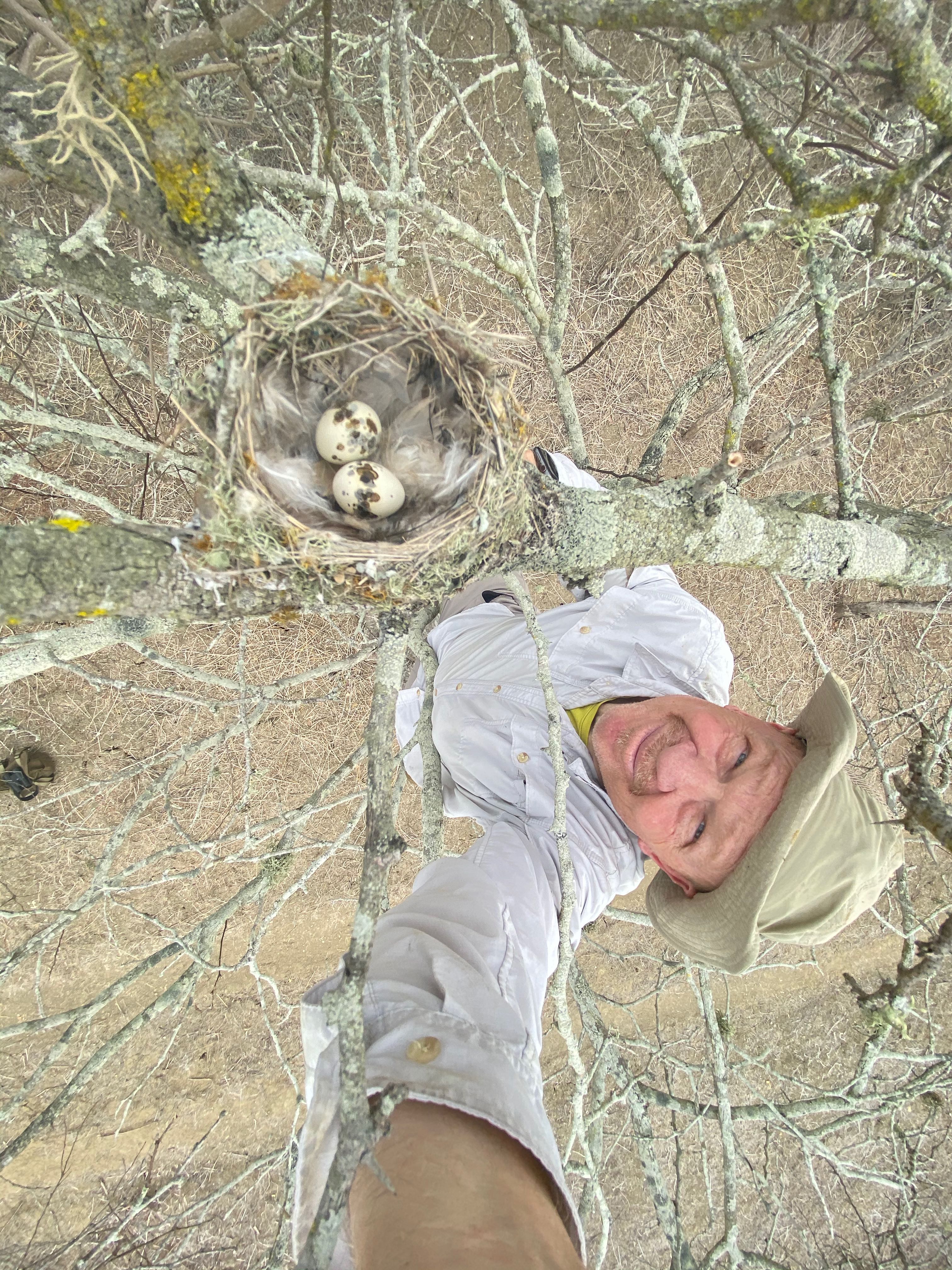 Blair Wolf in the field

Museum collections of tortoises and turtles are from the Nevada National Security Site (formerly the Nevada Test Site) and the Trinity Site in New Mexico, to understand how radionuclides were incorporated into these reptiles during and after historic nuclear testing events during the 20th century. Some samples will come from the Museum of Southwestern Biology at UNM. Live-sampling tortoises will involve fieldwork, potentially in central Asia or elsewhere.

Once they reach the field sampling phase of the project the researchers plan to work with local biologists to understand the location and distribution of tortoises in the environment. They will then survey and track tortoises in their habitat and conduct sampling in the field.

Conrad explained that the research involves sampling individual layers of tortoise shell scute keratin for radioactive elements. Tortoise shells  ̶  the colorful outer layer  ̶  grow like trees in annual layers. Their shells are also composed of tissue similar to human fingernails or toenails. The research will use a variety of mass spectrometry approaches to then analyze and understand radionuclides within individual tortoise shell layers from historic and modern individual samples.

Humans and animals could benefit from the research.

“Our work has originated from a desire to better understand biological signatures of nuclear events in the environment, both so that we may establish a novel sample and analysis process for identifying nuclear activities around the globe, and also to examine the potential environmental and/or health effects of human-derived radionuclides. We expect this research will have the potential to benefit animal and human populations living in locations with historic or modern nuclear activities,” Conrad said.

He added, “We expect to find unique signatures of radionuclides within tortoise shell that match, to the calendar year, historic nuclear testing events within the western United States and elsewhere. This will allow our team to establish a baseline record of radionuclide assimilation in the environment, and provides the opportunity to field-test this approach to understand legacy and/or modern nuclear activities around the globe.”

“Dr. Wolf and the UNM Department of Biology have pioneered studies of tortoises and their shells in the past,” Conrad noted. “This research project is an exciting collaboration to build off of the work Dr. Wolf and his students have already completed, especially on desert tortoise ecology. Our team is excited to be working together on this research, and we look forward to expanding our collaborations at UNM in the future.”