A group of University of New Mexico researchers are working on two Department of Energy (DOE) research grants that investigate the dynamics of spin-polarized electron beams in existing and planned high energy storage rings. Research Professor Klaus Heinemann and Emeritus Professor Jim Ellison of UNM's Department of Mathematics and Statistics have been leading this six-year, $1.6 million project which is now in its second three-year cycle.

“This research relates to the design and commission of the next generation of particle physics machines,” Heinemann said. 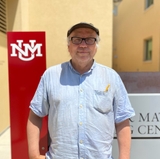 The first grant is titled Re-evaluation of Spin-Orbit Dynamics of Polarized e+ e- Beams in High Energy Circular Accelerators and Storage Rings: Theory and Computation and the second grant is Numerical Optimization for Spin Dynamics in Electron (Positron) Storage Rings. The first grant is funded under DOE's High Energy Physics Program, Heinemann and Ellison are leading the work along with UNM Adjunct Professor Desmond Barber, Postdoc Oleksii Beznosov and a graduate student. Beznosov recently completed his Ph.D. working on the project and his dissertation was nominated for UNM's 2021 Popejoy Award.

The second grant is funded under DOE's Accelerator Stewardship Program and is led by the group of Lobo researchers, along with Georg Hoffstaetter and David Sagan of Cornell University under a UNM subcontract. The two grants are closely related.

The project’s focus is electron storage rings with high to very high electron energy (up to 350 Giga electron Volt). Heinemann and Ellison say these storage rings are used by particle physicists to study the basic structure of matter and energy in the universe. The spin of the electron can be fully understood only in terms of quantum physics; however, it can be partly understood as a tiny spinning top, and so the key challenge of these storage rings is to get the axes of the spinning tops aligned as much as possible in order to obtain a high degree of spin polarization in the beam. A high degree of spin polarization is important as it gives an experimental knob for particle physicists and allows for accurate measurement of the electron energy. Two major effects on the spinning top's axes are coming from the electromagnetic field exerted on the electron beam as well as from the synchrotron radiation emitted by each electron.

“Our work is unique in that it focuses on the mathematical aspects of the electron beam dynamics,” Heinemann said. “In fact, we are concerned with the development and analysis of high-performance computing algorithms for simulation and optimization of spin-polarized electron beams.”

A primary focus of the first grant narrows in on two proposed machines, the Future Circular Collider (FCC) at CERN (Switzerland) and the Circular Electron Positron Collider (CEPC) in China. In the FCC-ee version of FCC and also in the CEPC a beam of electrons will collide with a beam of positrons (=anti-electrons) in order to produce and study the Higgs particle (which was discovered in 2012 at CERN). These machines will also look for new physics beyond the Standard Model of particle physics. The main emphasis of the second grant is work on the electron beam of the recently DOE-funded Electron Ion Collider (EIC) at Brookhaven National Laboratory (BNL). In the EIC a beam of electrons will collide with a beam of nuclei in order to investigate the quark-gluon structure of the proton and other nuclei.

Heinemann and Ellison said their work builds on years of DOE support awarded to UNM's Department of Mathematics and Statistics, beginning in 1999 for “Investigations of Beam Dynamics Issues at Current and Future Accelerators.” This led to the current focus on polarization and spin dynamics under Barber’s guidance.

“I am very grateful to UNM for its sabbatical program and liberal leave and teaching policies. These enabled me to change research fields in 1990 by allowing me to spend considerable time at the DOE Superconducting Super Collider (SSC) project in Texas from 1990 to 1993. There I was introduced to accelerator science and its very interesting mathematical problems, which are complex but not too complex,” Ellison said.

The work is Applied Mathematics in its nature, aiming to bring the best of mathematics to bear on problems in science. This includes using or extending ideas from Analysis, Dynamical Systems, Numerical Mathematics and Computation, Optimization, Probability, Statistics, and Stochastic Processes.

Thanks: Working in a field like Accelerator Physics entails interaction with many national and international researchers. Thus, in addition to the aforementioned people, there are a number of others to whom we are indebted, including Daniel Appelo at Michigan State University, Stephen Lau at UNM, Vadim Ptitsyn, Ferdinand Willeke and Gabriele Bassi at BNL, Fanglei Lin at Jefferson Lab (Virginia), Eliana Gianfelice and Tanaji Sen at Fermilab (Illinois), Alex Chao, John Irwin and Bob Warnock at SLAC (California) (Warnock is also adjunct at UNM), Mike Syphers (Northern Illinois University), Scott Dumas at the University of Cincinnati (also adjunct at UNM), David Bizzozero (LBNL), Jeng Shih (formerly SSC), Barry Newberger (formerly SSC), Helmut Mais and Mathias Vogt at DESY, Frank Zimmermann at CERN, Jie Gao at IHEP (China), and Etienne Forest at KEK (Japan). We thank the following DOE HEP program managers (former and present) for their vision to incorporate Applied Mathematics into Accelerator Science: David Sutter, Phil Debenham, LK Len and Eric Colby and the Department of Mathematics and Statistics for creating an excellent research environment.