It’s easy to say something is yours if it has your name on it, or you bought it, or received it as a gift. Yet, it’s not always such a clear cut picture of belonging when it’s something on your property. It’s even less obvious when it’s something with an undeniable public use–like water.

These are the murky streams the New Mexico Supreme Court have been navigating for over a decade, and finally reached the end of the river at.

Justices ruled unanimously that despite protests from land owners, who say they should have control over streams and rivers running through their land, that water belongs to the public for recreational use. It may sound minor with such little water in the Southwest, but this decision has critical impacts.

“This matter of public access is important to a lot of people, and I would argue it’s important to the state,” UNM School of Law Professor Reed Benson said. 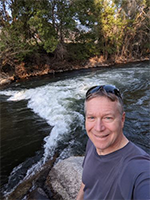 Benson has been along for the journey as a purveyor of water law, and was recently published through Writers on the Range for his analysis. It’s been shared across local and regional publications like the Salt Lake Tribune, as water rights are a hot topic in a period of record drought across the Southwest.

“It was a piece I've been thinking about writing for a long time,” Benson said. “When I get to spend a day on the river my passion for water law and policy just gets reinforced.”

Benson said, however, it’s not just a widespread problem lasting a decade, but one that goes back dozens of years.

In 1945, the New Mexico Supreme Court established precedent when the Army Corps. Engineers created a man-made reservoir. The State Game Commission sued to allow the public to use the entire surface of the reservoir, even though the lakebed was privately owned.

Then, it was agreed that what was established in the state constitution, reading ‘all unappropriated water belongs to the public’ was fact. The public had a right to access water no matter where it was. They could float, dip their toes in, and swim to their hearts’ content.

Today, this debate took the shape of the case Adobe Whitewater Club v. State Game Commission. It’s a case with a lot of nuance and players, which elevated to state game commissioners losing their job for allegedly opposing opinions one way or the other.

“It was already pretty questionable if that rule was valid,” he said. “But it became a big political fight, and it became clear the courts were going to have to decide it,” Benson said.

Under the Gov. Martinez administration, the State Game Commission  had adopted a rule, maintaining land owners had non-navigable streams–meaning the public could no longer touch beds and banks on their land. Land owners now had the right to exclude people, if they hiked, fished, and paddled through what they claimed as their property.

“If a relatively wealthy few can control the relatively few flowing streams in New Mexico just for their own benefit, then that I think is a problem for the public,” Benson said.

That was where Adobe Whitewater Club came in. They asked the question, Benson also has asked.

“The more we brand New Mexico as having an outdoor recreation economy with having all these wonderful outdoor amenities, and bring people to enjoy all the great outdoor stuff we have, the weirder it is if the public can't get to those places,” he said.

The state Supreme Court made their message clear within 15 minutes, stating plainly in the argument: “the Regulations are an unconstitutional infringement on the public’s right to use public water.”

“I think the New Mexico Supreme Court got it right,” Benson said. “I like seeing this state both historically and today really out in front on this issue in a way that I think is both good law and good policy.”

While Benson agrees with their ruling, as a long time kayaker, he cannot help but understand the qualms of property owners, who are concerned about the impacts that recreational use can have on both lands and waters.

Especially with dwindling water resources, more home-owners on the fence are concerned about the impact lawless recreation could have on their efforts to preserve the habitat.

“There are some recreational users who aren't very responsible, who don't practice good etiquette when they recreate and they give us all a bad name,” he said. ““I don’t see it as a black and white issue.”

He believes there is an avenue for property owners to take this denial to the U.S. Supreme court. He does not believe, however, they will agree to hear the case. That’s because as the question emerges more and more in the states with trailing water, the answer could become more challenging to find.

As more places like Colorado approach a similar battle with anglers, Benson says New Mexico has played an important role in setting the stage for precedent on what it means for something to be public.

“New Mexico was a real leader on this issue. That case from the 1940’s really was a pioneering case in the rocky mountain region of what it means for water to be public,” he said.