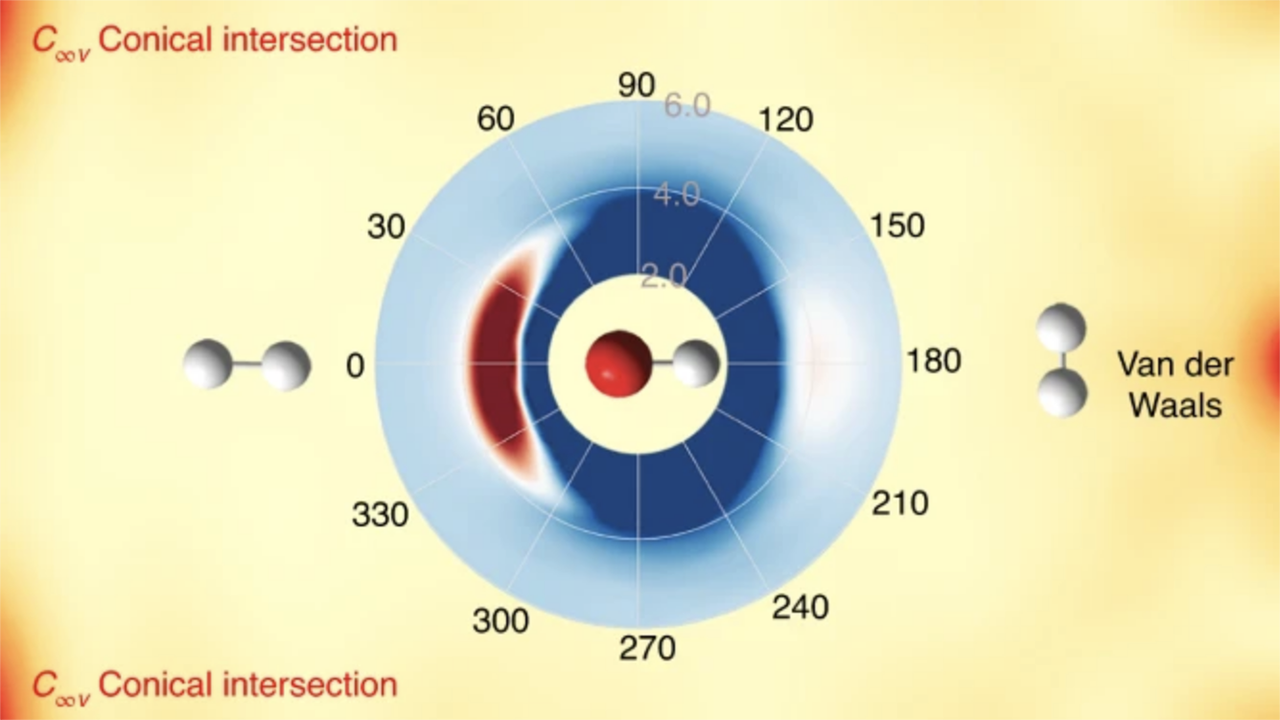 The Born–Oppenheimer (BO) approximation is the best known mathematical model in molecular quantum mechanics. Named after Max Born and J. Robert Oppenheimer, the approach was proposed during an early period of quantum mechanics back in the late-1920s.

The BO approximation is the assumption that the wave functions of atomic nuclei and electrons in a molecule can be treated separately, simply based on the fact that the nuclei are much heavier and move much slower, a few thousand times slower than the electrons. This so-called adiabatic approximation is widely used in quantum chemistry to enable the computation of molecular wave functions and other properties for large molecules.

Oppenheimer is among those credited with being the "father of the atomic bomb" for their role in the Manhattan Project, the World War II undertaking that developed the first nuclear weapons.

The breakdown of the BO approximation is omnipresent in chemistry, and a detailed understanding of the non-adiabatic dynamics is still incomplete. However, there is general agreement that dynamics can be impacted by excited electronic states near an electronic degeneracy, such as conical intersections (CI), where the electronic and nuclear coordinates are strongly coupled. These are cases where the assumption of separable motion no longer holds, which makes the approximation lose validity. This breakdown typically happens when electronically excited species are involved in the reaction, such as the collisional de-excitation, often called quenching, of electronically excited hydroxide (OH) radicals.

“It turns out that the Born–Oppenheimer approximation is only partially correct,” said UNM Distinguished Professor of Chemistry Hua Guo, a theoretical chemist who is interested to understand the general principles and concepts in chemistry. “In many cases, nuclei can move as fast as the electron. Essentially what we have done is to use state-of-the-art quantum calculations to investigate such non-BO dynamics of a chemical process, and we found some interesting results, which are not consistent with a previous experiment conducted at The University of Pennsylvania. This is quite unusual because often the experiment is considered to be the ultimate truth and theory is trying to match the experiment. Here's a case showing that that theory turns out to be more informative than the experiment.”

The research, titled “Full-dimensional quantum stereodynamics of the non-adiabatic quenching of OH(A2Σ+) by H2” and published recently in Nature Chemistry, highlights some interesting and surprising results that will allow scientists to understand other non-BO reactions in the future. As part of the study sponsored by the Department of Energy with a three-year, ~$1.4 million grant, scientists investigated the non-adiabatic quenching of electronically excited hydroxide radicals by hydrogen molecules using a full-dimensional quantum dynamics model. This reaction plays an important role in understanding combustion chemistry and atmospheric chemistry. Importantly, the quenching is facilitated by two CIs between three BO electronic states, with makes the calculations very demanding. The majority of the computation was performed at the Center for Advanced Research Computing (CARC) at UNM. Good agreement with the experiment was found for the hydroxide product state distributions, while the non-adiabatic dynamics are shown to be controlled by stereodynamics, essentially the relative orientation of the two reactants.

The uncovering of a major (in)elastic channel, neglected in a previous analysis but confirmed by a recent experiment, resolves a long-standing experiment–theory disagreement concerning the branching ratio of the two electronic quenching channels. This suggests a reinterpretation of the earlier experiment.

“It's a case where theory trumps experiment,” said Guo. “In this research, we show based on our calculations that there was actually a flaw in their model, and after that flaw was fixed, we got very good agreement with their observations. This resolves a long-standing experiment–theory discrepancy concerning the reactive/non-reactive branching ratio in this important process.”

“The exciting story is that theory has now reached a point where we can tell the flaws in the experiment. We can tell microscopically what is going out in a complex nonadiabatic reaction using high-level quantum mechanics. That's very exciting because now we can study many more complex reactions with what we have learned with this prototype. It represents a big step forward in understanding the impact of the BO approximation in chemical reactions.”

The research was sponsored by the U.S. Department of Energy.