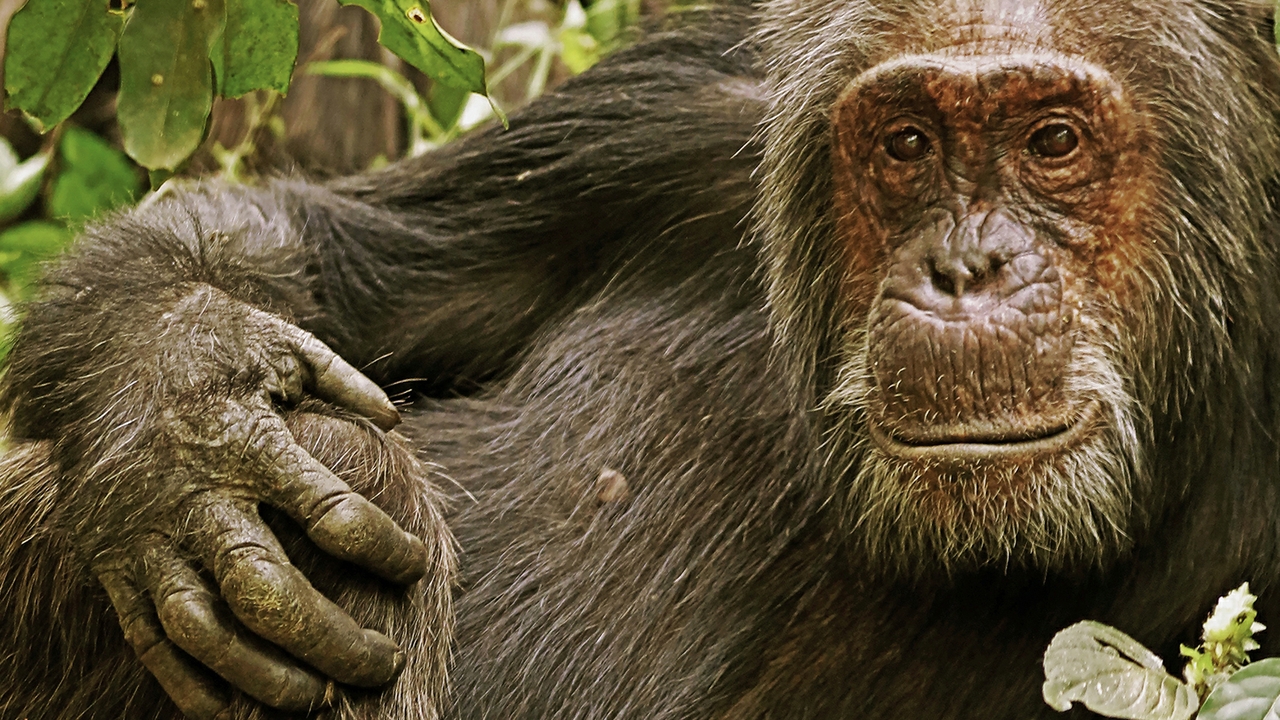 The world’s population is aging rapidly, presenting an urgency to address the health problems of the aged. Critical insights on these problems can be gained by examining how the aging process has been shaped over evolutionary time, and how it is influenced by different environments and lifestyles.

This research sheds light on the complex relationship between aging and disease in humans and offers clues to the social and ecological predictors of successful aging. Emery Thompson, along with Alexandra Rosati of the University of Michigan and Noah Snyder-Mackler from Arizona State University, guest edited the issue, and she and her UNM colleagues contributed four research articles related to their ongoing research on chimpanzees in Uganda.

One article, for which Emery Thompson is the lead author, investigates the aging of physical condition and performance in wild chimpanzees using a large dataset spanning over 20 years. This involves novel ways to translate “frailty” and “sarcopenia” (loss of muscle tissue as a natural part of the aging process), clinical phenomena that significantly impact human mortality and morbidity, using non-invasive measures developed by Emery Thompson’s lab.

“While we found that older chimpanzees had moderate declines in muscle mass and some changes in activity, they did not show evidence of a 'frailty' syndrome as seen in humans. In other words, aging did not produce major impacts on the chimpanzees' ability to sustain their physically-demanding lifestyles. Physical frailty is a major predictor of human mortality in developed countries. We tend to think of our bodies as machines that just wear out from overuse, but this study adds to emerging evidence that this is not inevitable and that consistent activity promotes healthy aging,” Emery Thompson observed.

The second paper is from UNM graduate student Megan Cole, who produced a study that investigated the influence of lifestyle and aging on chimpanzee blood lipid profiles. Cole collected samples from veterinary exams conducted with a group of chimpanzees in sanctuaries who have been rescued from the bushmeat or pet trades and live in managed colonies on large, forested islands in Africa. Compared with captive chimpanzees, who eat processed diets and have relatively sedentary lifestyles, the sanctuary chimpanzees get a lot of physical activity and eat relatively natural diets comprised primarily of fruits and vegetables.

“As with humans, active lifestyles in chimpanzees were associated with lower Body Mass Index and healthier levels of triglycerides and cholesterol. This is particularly interesting because chimpanzees do not exhibit the same vulnerability to coronary artery disease as humans, even when their lipid profiles are elevated. This suggests that the influence of lifestyle on cardiac risk factors is conserved from our evolutionary past but would have evolved under conditions where they would not have yielded the same detrimental outcomes,” Emery Thompson remarked.

The comparison between free-ranging and captive chimpanzees is a good model for the effects of recent development on human lifestyles and helps us to understand how mismatched our modern lifestyles are to those in which our bodies evolved.

In the third paper, UNM graduate student Sarah Renee Phillips produced a study examining how reproduction influences gastrointestinal parasite loads in wild, female chimpanzees. Theory suggests that the high costs of pregnancy and lactation should compromise health and immune function both in the short term and over time, such that mothers who have had more offspring will have higher rates of infections, and this has been demonstrated in a number of mammals, Emery Thompson pointed out.

In humans, researchers have often failed to find evidence of this tradeoff, often reporting that even under harsh conditions, mothers with high fertility live as long or longer than those with low fertility. One hypothesis for this puzzling outcome is that unique features of human reproduction, such as the support of mothers and infants from family and community members make the high costs of reproduction tolerable.

“However, in our study of chimpanzees, where mothers are the sole individuals responsible for caring for their offspring, we found only minor, transient effects of reproduction on parasites, and females with higher fertility actually had fewer parasites for their age. This suggests that hominids in general may have strategies for managing the high costs of raising their infants, and these strategies are likely vital for long lifespans,” said Emery Thompson, who co-authored the third paper with Phillips and UNM associate Martin Muller of the Anthropology department.

"What is so fascinating about these results is that chimpanzee mothers, unlike humans, take care of their infants entirely on their own in an environment where food is in limited supply. So, being able to support active, big-brained infants is not a trivial effort," she added.

The fourth paper, in collaboration with veterinary pathology experts at the University of Wisconsin, shows that aging was associated with an increase in the number of viruses found in the digestive tracts of wild chimpanzees. This effect was particularly pronounced in males, who, similar to humans, have shorter lifespans than females and exhibit other signs of accelerated aging relative to females. This result likely reflects aging of the immune system, a phenomenon with wide-reaching effects, but changes in the digestive tract specifically have the potential to impact digestion and nutrient absorption, Emery Thompson said. Muller coauthored the fourth paper.

Research for the papers on frailty, viruses and parasites was done at Kibale Chimpanzee Project in Uganda. The heart disease study was conducted with semi-free-ranging chimpanzees in sanctuaries in Uganda and Republic of Congo. Whereas researchers were limited to non-invasive observations and urine and feces collection at Kibale, the sanctuaries conduct annual veterinary health exams on their chimpanzees, so the team was able to get blood samples from them.

The special issue also includes contributions from researchers studying aging in small-scale human populations in Tanzania, Kenya, and Bolivia, as well as a variety of other primate studies that address physical, social, cognitive, and genomic effects of aging.