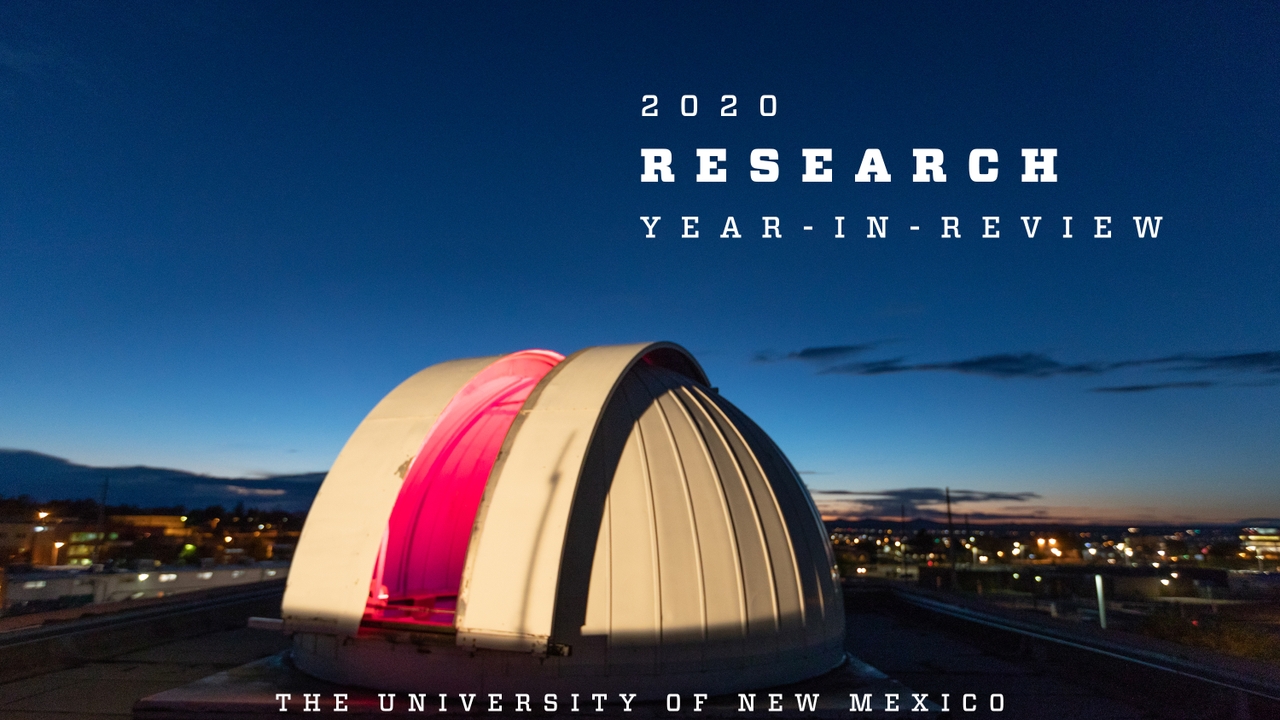 University Communication and Marketing (UCAM) annually compiles a Year-in-Review highlighting its research news across campus during the course of the calendar year. Below is a select list of 2020 stories highlighting student, faculty, staff and alumni research accomplishments.

Dead men tell no tales, the saying goes. But a new database at UNM will allow researchers and others to gather a wealth of information from deceased men, women, and children. Construction of the New Mexico Decedent Image Database is complete and the website went live this week. Dr. Heather Edgar, forensic anthropologist at the UNM Office of Medical Investigator (OMI) and associate professor of anthropology, spearheaded the project to convert a dataset of whole body decedent CT scans into a searchable database available to researchers.

Substance use disorder and addiction are complex public health problems, vividly evidenced by the ongoing opioid epidemic throughout the country. New Mexico has the highest alcohol-related mortality rate and currently races to address this as well as opioid and methamphetamine addiction rates. Few people understand the complexities of these issues better than Dr. Katie Witkiewitz, Regents' Professor in the UNM Department of Psychology.

Geologists refine the timing of the Cambrian explosion and trilobite evolution in Grand Canyon
May 1, 2020

Scientists from The University of New Mexico are featured on this month’s cover of Geology Magazine involving new research that refines the timing of the Cambrian Explosion and trilobite evolution in the Grand Canyon. The research features UNM Professors Karl Karlstrom and Laura Crossey and has been funded with a three-year, $815,000 grant by the National Science Foundation’s Sedimentary Geology and Paleobiology program.

The Department of Energy (DOE) has awarded $115 million over five years to the Quantum Systems Accelerator (QSA), a new research center led by Lawrence Berkeley National Laboratory (Berkeley Lab) that will forge the technological solutions needed to harness quantum information science for discoveries that benefit the world. The Quantum Systems Accelerator brings together dozens of scientists who are pioneers of many of today’s quantum capabilities from 15 institutions including The University of New Mexico.

Startling new research by a team of professors from The University of New Mexico revealed that many UNM students may not be getting their food and housing needs met. This week, the UNM Basic Needs Project released its 2020 research report Basic Needs Insecurity at UNM that shows both food and housing insecurity prevalence are higher among students than in the broader population of New Mexico.

Keeping COVID-19 out of classrooms: Open windows, use glass screens in front of desks
October 21, 2020

One of the most important environments to gain a rapid understanding of COVID-19's spread is inside the school classroom. In Physics of Fluids, from AIP Publishing, University of New Mexico researchers used computational fluid-particle dynamics to explore aerosol transport within an air-conditioned classroom model. They discovered opening windows increases the fraction of particles that exit the system by nearly 40 percent, while also reducing aerosol transmission between people within.

Lani Tsinnajinnie knows that clean running water is not just essential for everyday life, but future planning. As an assistant professor at UNM’s School of Architecture and Planning (SAP), the researcher brings a unique perspective to an issue that’s been underserved by local, state and federal leaders: ensuring clean water infrastructure and accessibility to Native American communities.

As the deadly COVID-19 pandemic continues to wreak havoc around the world with no end in sight, new ways in which to stop the spread or mitigate the effects of the disease are few. Now, a team led by the Center for Biomedical Engineering faculty David Whitten, Distinguished Professor in the Department of Chemical and Biological Engineering, along with Eva Chi and Linnea Ista, faculty members in the same department, have found some light at the end of the tunnel, so to speak. The main finding of their research involves the ability of the combination of certain polymers and oligomers when combined with UV light, to almost completely kill the coronavirus.

In Biology 101 you were taught that inside each cell, tiny strands of a molecule called RNA "transcribe" the genetic code in your DNA, the first step in the process of building the proteins that make up your body. But in recent years the picture has grown more complicated. It turns out there are also circular, non-coding forms of RNA that regulate various aspects of gene expression, allowing many of our 20,000 genes to make more than one form of each protein.

University of New Mexico physicians are no strangers to caring for patients with rare diseases. In her career as a UNM pediatric neurologist, Leslie Morrison, MD, studied inherited cerebral cavernous malformations (CCM), a rare and dangerous brain condition passed down for centuries among New Mexico Hispanic families.

As the COVID-19 pandemic spreads around the world - with lethal consequences for many - scientists have sprung into action to find lifesaving treatments. University of New Mexico scientists Graham Timmins and Vojo Deretic believe that previously unpublished research they conducted more than a decade ago might offer a glimmer of hope.

University of New Mexico scientists played a key role in new research demonstrating for the first time that changes in the gut microbiome may help trigger human neurovascular disease. Members of New Mexico Hispanic families who share a genetic predisposition for dangerous brain bleeds known as cerebral cavernous malformations (CCM) were recruited for the study, published earlier this week in Nature Communications.

Earlier this year, Elizabeth Heaslip visited an ear, nose and throat specialist for help with a chronic earache. The doctor thought it was probably due to teeth-grinding, but ordered up a CT scan just to rule a more serious condition.

Armani Sanchez was a toddler when her mother Alma discovered a small brown spot underneath her left arm. A doctor told her it was eczema and said it would go away as the girl grew older - but the problem grew worse.

When a patient with an injured brain is lying unconscious in the ICU doctors urgently need to find out what’s going on inside the “black box,” because that information will help them decide on the best course of treatment. At The University of New Mexico Hospital’s state-of-the-art Neurosciences Intensive Care Unit, a team of specialists uses sophisticated technology to monitor brain-injured patients, including those who have suffered traumatic brain injury, aneurysm ruptures, subarachnoid hemorrhage and stroke.

Catching breast cancer early can give women the best chance of beating the disease. Mammograms help to catch breast cancer in its early stages – usually before a woman even feels any symptoms – and can afford women the most treatment choices. But Dario Marchetti, Ph.D., thinks mammograms can’t find cancer soon enough. He and his team are developing tools to find cancer cells in the blood, before the primary tumor grows large enough to see on a mammogram, and before tumors can grow in other parts of the body. Their work was reported in the June 19, 2020, edition of Cancers.

When 16-year-old Lilliana Newman woke up on Monday, June 15, with a piercing headache, her dad, Chris thought it might be a severe migraine and gave her painkillers, but nothing worked to ease the pain. Then she said, “I need to go to the hospital,” and fainted. Chris called for an ambulance, which brought Lily to an urgent care center capable of treating migraines. They were unable to alleviate her symptoms so they transferred her to a community hospital on Albuquerque’s West Side.

Molecular Shape Shifters
UNM Team Finds That Proteins Can Go From Reading DNA to Repairing it, Pointing the Way Toward New Cancer Treatments

Residing inside each of our cells, our DNA acts as a book of recipes for making proteins. But if a recipe is wrong, what does a cell do? Peng Mao, Ph.D., and his team discovered an intricate series of events that cells use to repair our DNA as the recipes are being read. The team published their study in the July 20 online edition of the Proceedings of the National Academy of Sciences. Their findings could lead to improved cancer treatments.