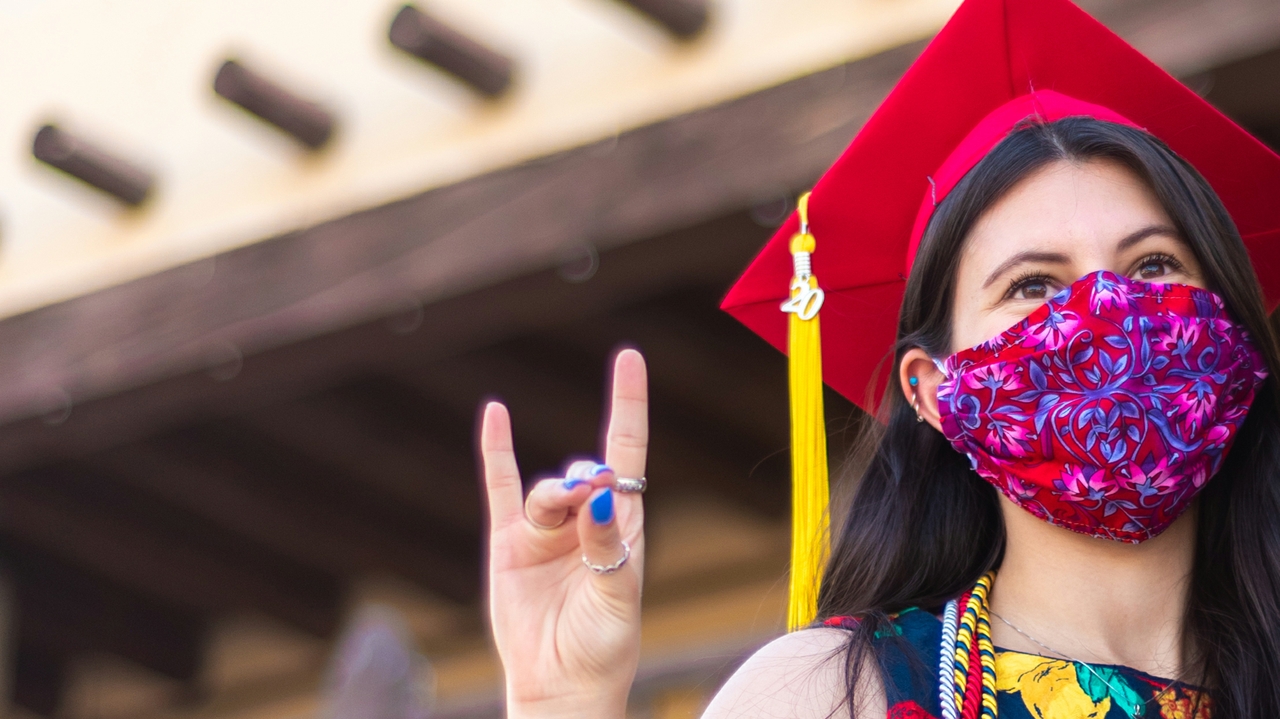 When the Class of 2020 left for spring break in March, they had no way of knowing they would not be returning to The University of New Mexico campus this year. The COVID-19 worldwide pandemic largely shut down life as was known, and ushered in a new era of social distancing, mask-wearing and remote learning.

The Class of 2020 took each change, pivot and learning adaptation in stride. They exemplified resilience as they learned to navigate electronic classrooms; they defined new opportunities through socially distant gatherings, and they innovated a new way of virtual living while continuing to excel in their studies.

As they continue into the next chapter of their lives, The University salutes their determination, perseverance and conviction of purpose in pursuing their degrees. These inspirational graduates are our hope for the future and, connected by the unexpected, will always hold a special place in the hearts and history of The University of New Mexico. 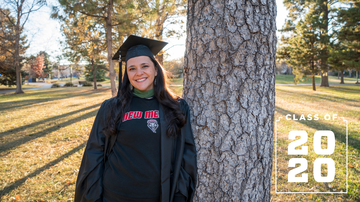 Tiffany Martinez-Durant | M.S. Health Education
Graduate furthers education helping benefit fellow Lobos
A health education years in the making and culminating with a final semester of remote learning due to a worldwide pandemic. But time and time again, with every calibrated move, Tiffany Martinez-Durant has strategized ways to further her educational career so that her fellow students reap the benefits instantaneously. She exemplifies The University of New Mexico’s goal to provide students with life skills and knowledge that will contribute to a prospering local and state workforce after graduation. A true testament of a devoted Lobo, Martinez-Durant started her journey at UNM in 2007 and graduated four years later with a bachelor’s degree in health education. 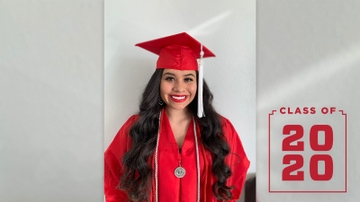 Destinie Angel Otero | B.S. Psychology
First Generation graduate learns from life’s experiences, prioritizes the importance of education
Inspiration comes in many different forms including people, places, and experiences. Sometimes it’s a combination of factors as in the case of University of New Mexico 2020 graduate Destinie Angel Otero. For Otero, a first-generation graduate, inspiration came through the maladaptive behavior of her parents coupled with her desire to choose a better life through education while also helping others. Otero was born to a teen mom who was 16 and living with her parents. As Otero grew up, she thought about attending college, but at the time, it was only a dream. 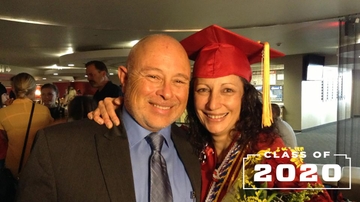 Maude “Sush” May | MBA
Nursing grad pivots during pandemic to earn MBA
Maude “Sush” May has earned a bachelor’s and master’s degree in nursing, and recently completed her doctor of nursing practice (DNP) at The University of New Mexico College of Nursing. But her educational journey did not come without its hardships, and her story is nothing short of inspirational. May began her pursuit of a nursing career as a single mother of five children. She was a stay-at-home mom and had to complete several prerequisites before applying to UNM. She managed to complete those courses while supporting her children through part-time homeschooling and working from home as a telecommuting typist. 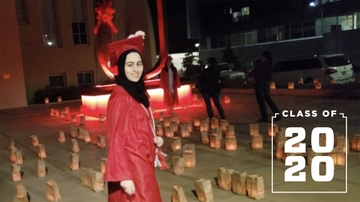 Amenah Adi | B.S. Psychology
Immigrant overcomes language barrier to graduate
Moving to a new country where you don’t know the language is a difficult endeavor for anyone at any age. For immigrant and now U.S. citizen, Amenah Adi, it’s exactly how she began her journey in America—not knowing much about the English language. It was December 2014 when Adi, originally from Hama, Syria, came to the United States from Jeddah, Saudi Arabia, a port city on the Red Sea. She was attending college at King Abdul Aziz University when her family decided to move to the United States. Suddenly, she found herself in a new country with people who spoke a strange language. 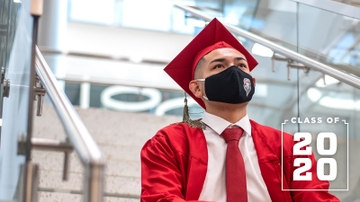 Grant Atencio | B.S. Community Health Education
Overcoming culture clash and embracing ‘home’
Adjusting to new surroundings is nothing new for UNM senior Grant Atencio. His dad’s military career took the family across the United States to Hawaii, Georgia, Texas, Arizona and Colorado, just to name a few. New schools, new friends, new cities and new cultures came with every move. Originally from Ohkay Owingeh Pueblo in Northern New Mexico, Atencio says there have been times when he had to choose between pursuing higher education or traditional values – and he’s learned to do both. But not without some hardship along the way. 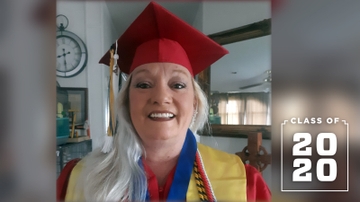 Debbie Ellzey | B.A. Art Studio
Inspiring grad chases her true passion at 52
Debbie Ellzey is graduating this fall at 52 years old. After a long career, she decided to further her education and ended up making a unique degree switch not long into her academic career. After being a practicing nurse for 29 years, she decided to return to UNM to continue her education and pursue a nursing degree – feeling that she could offer more to her patients and family. But she soon discovered that she was denying her true passion. 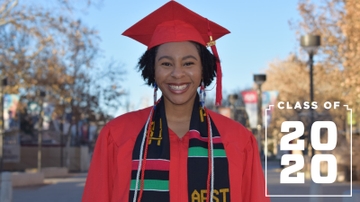 Beth Glenn | B.A. Africana Studies
UNM gave grad a degree and a new family
It was soon after her 30th birthday that Beth Glenn woke up one night and told herself “I have to do something different.” A fan of the series ‘Breaking Bad,’ which was filmed in New Mexico, she decided Albuquerque looked intriguing, so she packed up, moved, and started studies at The University of New Mexico. She graduates this week. The road hasn’t been easy. Glenn said she went through many hardships and many sleepless nights. 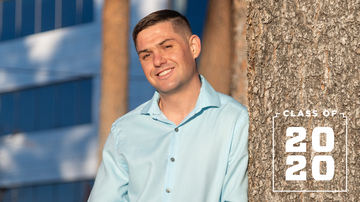 Steven Trujeque | B.S. Sociology/Criminology
A way out: graduate says education saved his life
Education helped save his life. Steven Trujeque, the father of two, was headed toward a future of incarceration and, possibly, a dance with death. He needed a way out. A way out of homelessness, drug addiction and risky behavior. Ultimately, a way out of self-doubt. Trujeque has taken the last month to reflect on every moment that’s led him to becoming part of the Class of 2020 at The University of New Mexico, graduating with a bachelor’s degree in criminology and a minor in psychology. 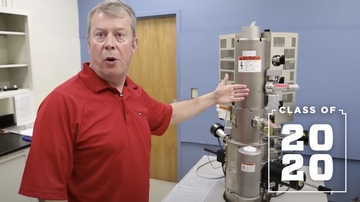 Geoffrey Courtin | M.S. Chemical and Biological Engineering
Decades in the making, a fixture in UNM chemical engineering earns his graduate degree
The year was 2000. Bill Clinton was in the last year of his presidency, Britney Spears was topping the music charts, and the world was breathing a collective sigh of relief that the “Y2K” predictions that many feared would shut down computers and electronics around the world were largely unfounded. Also that year, a student named Geoffrey Courtin started his master’s degree in chemical and biological engineering at UNM. 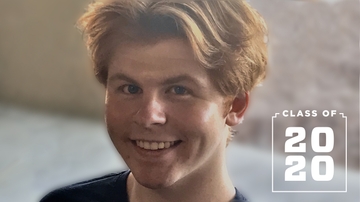 Ian Hucke | B.A. Fine Arts
Grad uses painting to portray subject's lives
When he was a senior at La Cueva High School in Albuquerque, Ian Hucke had major surgery to remove a mass from his brain due to a congenital condition. While still in rehabilitation, and not wanting to delay college, he made a deal with his parents: If he stayed near his home and parents Debbie and Doug Hucke and sister Rebecca, and attended The University of New Mexico, he could live on campus and maintain his independence, a priority for him. A few years later, while a 21-year-old junior at UNM in 2017, Hucke crossed Lead Avenue in Albuquerque on his way home from Johnson Center. He doesn’t remember much of what happened for a while after that 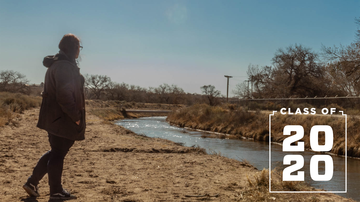 Robyn Rozelle | B.A. Fine Arts
UNM grad chases art dream after losing her sight
She read three simple words, nothing more, “call for nurse,” but it was those three words printed on a sign that crept over her feet at the edge of her hospital bed that assured Robyn Rozelle she regained her eyesight. And in that very moment, she made a promise to follow her dreams and pursue her passion for art. Five years later Rozelle has ingrained part of her legacy at The University of New Mexico, graduating with a bachelor’s degree in Fine Arts. 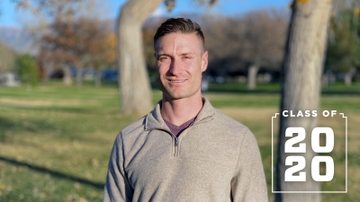 Barry Ore | M.A. Counseling
From cages to classrooms: UNM grad helps those behind bars
UNM senior Barry Ore’s energy is infectious. His spirit and drive can be felt even from across the computer screen during a Zoom interview. He’s one of many Lobos whose life was upended by COVID-19, which forced UNM students, faculty and staff to adjust to remote work and school. But even before that happened, Ore was a very non-traditional student, and this isn’t the first time he’s been faced with a tough reality.