Meow Wolf slays the Santa Fe art scene with support from UNM artists
An old bowling alley on the south side of Santa Fe has undergone an artistic transformation that promises visitors a unique, multisensory art experience like they have never encountered before. As Meow Wolf gains national attention and accolades, current and former Lobos say they are thankful to be a part of this unprecedented arts and entertainment experience.

Lobos for Life – The Class of 2016
Each year at UNM, a new cohort of graduates celebrates the culmination of a long, sometimes trying but rewarding experience as they graduate after completing their degree requirements. From graduates who have battled back from trying circumstances, to graduates who have suffered and endured loss during their academic careers, to first-generation graduates, they have all worked hard and earned their college degrees.

Defining UNM
Each of Us Defines All of Us — Unalike Minded Together — It’s Our Differences That Unite Us. These are just a few of the phrases that embody who we are, what we do and why it matters at The University of New Mexico.

Celebrating 75 years of the Navy in the desert
Cultivated for the past 75 years, the Naval Reserve Officer Training Corps, together with UNM, has thrived far from the waters that the Navy calls home.

Popejoy Hall celebrates 50 years
In 1949, Tom Popejoy promised the University, Albuquerque and all of New Mexico that he would build a performing arts hall on the campus. He included the hall in a list of projects he intended to build for the University as he was being installed as president of UNM.

New PAIS facility will help UNM researchers and students change the world
It’s a simple idea that many say will revolutionize the way research is done at UNM: Build a facility to house classrooms, offices and laboratory space for scientists from across campus, not just from a single department.

WisePies Arena – The Pit celebrates 50th anniversary
Fifty years ago, a gym was built on The University of New Mexico's south campus at University and Stadium Blvds. Fifty years later, that same building has become an iconic gymnasium known for its loud, intense fan base, and successful men's and women’s basketball programs.

Silent Lights draws thousands to its sounds
UNM took the traditional homecoming dance to a whole new level with the introduction of Silent Lights, a silent disco on Smith Plaza. The rain didn’t keep the crowd away on Thursday night. By 8 p.m. a line of curious and excited students formed around the plaza. Many of them had never participated in a silent disco and couldn’t wait to experience the trend that is sweeping across Europe. 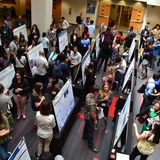